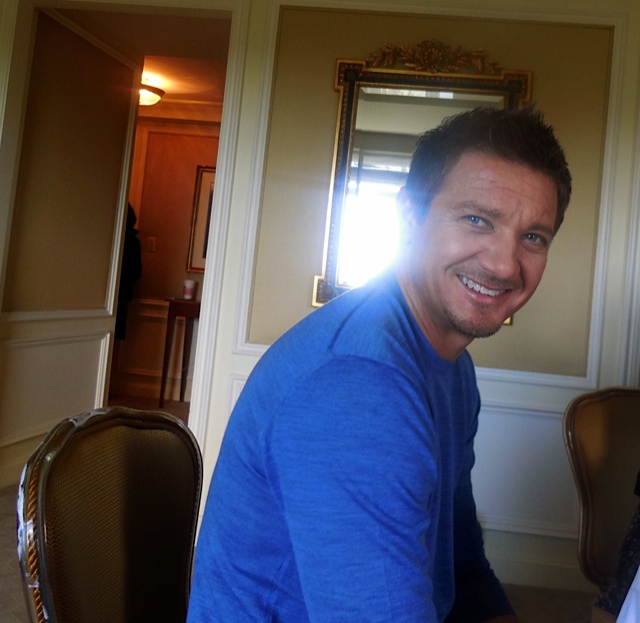 Jeremy Renner stars as investigative journalist Gary Webb in the heart-pounding thriller “Kill the Messenger,” which chronicles his efforts to track down the link between drug dealers, contra rebels in Nicaragua and the C.I.A. in a series he wrote in the mid 90’s called “Dark Alliance.” When the articles first published Webb was heralded, but soon the three major publications – The New York Times, The Washington Post, The Los Angeles Times – went after him and discredited his work. The movie points the finger that professional jealousy was the reason.

The L.A. Times was most relentless; Webb scooped them in their own back yard. Even Webb’s newspaper, the San Jose Mercury Times, threw him under a bus and distanced himself Webb’s reports. While many of Webb’s editors at the Mercury Times editors went on to better jobs at bigger publications, he never worked for a major newspaper again. In the midst of all this, a little scandal involving the President and an intern pushed the C.I.A.-contra-crack cocaine story off the front page.

Written by Peter Landesman, “Kill the Messenger,” is based on Webb’s 1998 book, “Dark Alliance,” a follow up of his reporting in which he defended the accuracy of his original articles, and Nick Shou’s 2004 book about Webb’s success and downfall, which gives the move its title. The director, Michael Cuesta, who directed the pilot of “Homeland,” knows how to build suspense. The movie is sympathetic to Webb and should reinstate his reputation while at the same time making audiences seethe at the betrayal he endured from those in his own profession.

Renner, who is also an executive producer of “Kill the Messenger,” participated in a press event recently at a midtown Manhattan hotel to promote the movie. Here are edited highlights from the event:

Did you reach out to Gary Webb’s family? “Peter Landesman, who wrote the script, spoke with them in depth, and a lot of other sources I’m sure, but I wasn’t a part of that nor did I want to. I was adamant about not speaking with all of the family just because I didn’t want anything biased coming my way. They were very generous in giving me videos, home videos of their father or her husband doing mundane things and doing other things, so I get a great sense of who he was as a father, as a husband, as a journalist. A lot of information and when I talked with them directly about their father that’s dead, it’s not my place to dig up old feelings or new feelings or fresh feelings. I didn’t want to do that so that I can go play him in a movie. It’s not my place, so out of respect for the family, I kind of hid from them, if you will. Then I got to meet them later on last week of shooting.

I got to spent a lot of time with them. It was amazing! It was lovely. It was awkward. It was cathartic. It was beautiful. It was encouraging. They were gracious and loving and I still talk to them and can’t wait to see them again at the premiere. They were very happy with the way the movie turned out.

What surprised you the most about Gary Webb or his story?

“What’s come to consciousness are my belief systems are a little more steadfast in heroism. People ask, ‘Do you think Gary Webb’s a hero?’ Well just because you’re brave I don’t think you’re a hero. It might be heroic for a quality, and I thought about it. What makes Gary Webb a hero can mean he’s flawed and that he owns his flaws as a journalist, as a husband, as a father. That to me makes him a hero I think.

The general public won’t be familiar with this story, which was overshadowed by the Bill Clinton – Monica Lewinsky scandal. Do you think this movie has a chance theatrically with audiences who may see it as downbeat?

“I try not to have any expectations with anything in life anyway. I don’t lead my life that way but when it comes to subjectivity in art it’s up to the subject. It’s up to what people want to take away from it. As long as we serve up as the artists and the story that we have here, something that can evoke emotion and conversation, maybe an emotion that sparks the conversation, I’m angry because of this, and I want to talk about it or I am heartbroken because of this and I want to learn more about Gary Webb or this or that. Ultimately the underlying par of this whole thing is it’s a shared experience. People go to the theater for a reason, for a shared experience… So I mean you come out of the theater and you have a conversation, maybe it’s your lover, maybe it’s your brother, or whatever it might be, and it’s an amazing $11 experience if you ask me, so outside of that, how many people go and do that? I have no control of that. But what I think we have here is something really quite beautiful in this story.”

“And like you said, yeah, is it old news? It was old news when Gary wrote about it. It was ten years old. What the important thing is, what we’re not really ultimately grabbing away from this, or like I’m only learning now what I’m grabbing away from it I’ve been talking about it so much… It’s about the Second Amendment ultimately it’s about the Freedom of Speech. This has something that affects all of us. There’s a lot of downstream stuff that happened, the specifics of Gary Webb, the specifics of the story, the specifics of the Sandinistas, blah, blah, blah, the crack cocaine, but it also represents something quite bigger and I think that’s a beautiful thing.”

Webb’s profession, the newspaper business, betrays him badly in this movie and turns out looking badly. How do you think they will react?

“Even though there’s a lot of politics happening in this movie, I just didn’t want it to be a politically biased movie by any means. It’s not a soapbox. I didn’t want to point the finger at any one entity because there’s not one person or one entity to blame. Even the San Jose Mercury News, or the CIA or the government or the New York Times, none of these things ultimately matter. It’s the entirety in itself that really kind of brought Gary down. I think if someone kneejerk reacts to the movie, then why do you feel so guilty about it? Having such a kneejerk reaction to the move, because we’re really not pointing the finger at anybody here. We’re just saying, ‘hey, this is Gary Webb’s experience, subjectivity, let’s go on a journey, so if you turn guilty about turning your back on the guy then…”

Why hasn’t his story been told before?

“I don’t know. It’s not popular perhaps? What he wrote about was very unpopular. It affected a lot of people and it’s sort of been talked and brushed away and kind of acknowledged and brushed away and ultimately never fully dealt with. And hence I’m sitting here right now talking about it. I think it’s time to sort of deal with this. It’s very relevant to what’s happening in our world right now with whistle blowing and accountability in journalism and sensationalism in media which is freaking disgusting to me but you as journalists I’m sure have to deal with it whatever, but like why do celebrity photos get more play than something else it’s like, that’s more of a commentary not even on media but on like it still takes people to read that smut, so it’s the people, it’s not even the media to blame, so it’s really quite frustrating.”

On another track, would you consider doing a television series, maybe “True Detective”?

“I’m a little busy at the moment to do it but yeah it interests me, sure. The idea of not having to be stuck on a show for seven years, yeah, like on network television…you have to sign away seven years of your life. they own you. I’m not interested in that.”