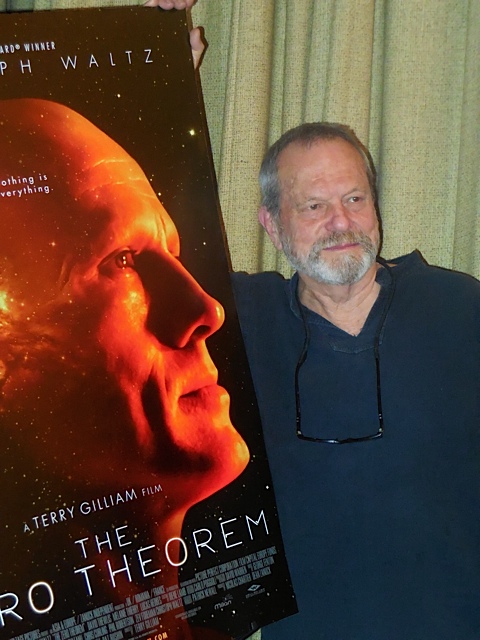 Terry Gilliam, the 73-year-old “Monty Python” star and founding member and veteran movie director, was in New York last week to promote his new wacky sci-fi epic, “The Zero Theorem.” Set in a candy-colored futuristic London, it stars Academy Award-winning actor Christoph Waltz as a reclusive and eccentric computer savant (Qohen Leth), who works for an omniscient and mysterious corporation called Mancom, headed by Management (Matt Damon in nifty suits). Management assigns Qohen the monumental task of uncovering the meaning of existence – or the lack of one, and delegates his computer whiz kid son, played by talented Lucas Hedges, to help Qohen complete the task. The teenager brings out Qohen’s human side and becomes a sort of surrogate son

During the press conference for the film at the Tribeca Grand Hotel Thursdayafternoon, Gilliam, who attended with the talented Lucas Hedges, cracked journalists and himself up often with his wry and unfiltered comments. “I get tired of talking about this f…king film,” he cracked early on.

(Note on Lucas Hedges – son of writer-director Peter Hedges – Lucas is best known for “Moonrise Kingdom” and look for him in the terrific upcoming film “Kill the Messenger” about investigative journalist Mark Webber.)

Here are edited highlights from the press conference with Terry Gilliam:

“Well that’s why this isn’t dystopia. This is Utopia. It’s a wonderful world! Everybody is out there! They’re dressed smartly. They’ve got a lot of color. They’re bouncing around all over the place. Cars are zipping back and forth. Shopping is 24 hours a day, seven days a week. What more do you want? The workplace, Mancom is fun. Rollerblades, scooters, zippy clothes in lots of primary colors. It’s a fantastic place. There’s only one guy who’s a dystopic element, the misery guy, and he’s called Qohen. He needs a kick in the ass. And this is one of the kicks! It’s really that.” Referring to dystopia, if you think the world we’re living in now is a dystopia then you may be right.” (Gilliam laughed)

How he circled back to “The Zero Theorem” in 2012 after he turned it down in 2008 to make the more personal films “The Imaginarium of Dr. Parnassus” and “The Man Who Killed Don Quixote.” Gilliam has famously attempted to make Don Quixote since 1998. (His doomed attempt to bring the film to the screen was the subject of “Lost in La Mancha,” a 2002 documentary directed by Keith Fulton and Louis Pepe.)

“After Parnassus I worked for a year on a half on Quixote. It fell apart. I just wanted to work. I said, what’s out there. Anybody got a job for me? And my agent said what about ‘Zero Theorem’? You mean they’re still interested? Okay, yes. Let’s go. The difference is your budget is now 8 and half million dollars. (He laughed). Actually it was 7 and a half million dollars, but I got it up to $8.5 million.”

Back in 2008 Billy Bob Thornton was to star in the film. Gilliam was asked to discuss how the conception of the film changed with a new lead in Christoph Waltz.

“It wasn’t the difference in the two actors. Each would have done it differently, no question. And they both would have been wonderful, let’s hope, very simple. But it didn’t come together then. I went off and made Parnassus (“The Imaginarium of Doctor Parnassus,” 2009), and then eventually it went back to see if we could make this and when Chrstoph’s name came up, bingo. The big difference was the fact that three years earlier we had a budget of 20 million dollars and then we made the thing for $8.5 million dollars so immediately we’re not shooting in London, and we’re in Bucharest.

We’re in a very different world relying on actors that I really love working with, some who are friends, one I’ve worked together with before, to come on and work for scale and things like that… The film changed enormously. It was nice being in Bucharest because it’s such an odd, interesting city. That immediately infects what we’re doing, and the lack of money meant that you couldn’t have normal proper costumes, you had to fake it. Carlo Poggioli (costume designer) had to make things out of plastic table clothes and shower curtains. He found just wonderful Chinese market, a Chinese market outside Bucharest, where you bought fabric by weight, not by length, not I’ll have a yard of this, but I’ll have three pounds of that.

On working with a smaller budget.

“You cut through the bureaucracy of complex filmmaking, cause it is a complex film, all this stuff. We have to create a world. Everything in there is invented, created in one form or another. On a larger budget communications aren’t as direct, things end up costing more cause people will do three versions of something just in case the director changes his mind to cover their ass. This there was no time for that. Bam, bam, bam, everything moves fast. And that’s very exciting to work like that because there’s no time to doublethink. It’s what can we do? How much we got? We can’t do that? Okay, Let’s do that instead. It’s a form of guerrilla filmmaking I suppose. It’s wonderful so I can’t even imagine what it was going to be like back then. That’s all gone. I’ve forgotten whatever that might have been. I just know what we’ve got. (He laughed).

On how people are hung up on being politically correct and not offending:

“People are constantly asking, ‘How do you feel? What do you think?’ So nobody really has to have their individual opinion. People sort of are constantly communicating, ‘Should I say that? Is that right? Have I gone too far? Have I offended? Am I rude?’ All these words keep coming up… People have got to start being individual and offense?  I’m obsessed about offending people because you get a discussion going, maybe, if I start talking about things rather than ducking and diving.”

On Video on Demand and how it relates to the distribution of the director’s films.

“It’s what the world has become. I mean with small distributors amplify as one, they don’t have the kind of money that Hollywood has to get the audience’s attention so basically we’re relying on people who might like a Gilliam film or want to see a Christoph Waltz film take an interest. Maybe it’s a kind, I wouldn’t say control, but a way of making the grass roots work, so people see video on demand and hopefully the word goes out, oh it’s a great film. What I have on my Facebook page, because I use Facebook to promote not to converse, and I watch people on there saying, ‘Oh yes I saw it on video on demand, but I can’t wait to see it on the cinema,’ or other people saying ‘I’m waiting to see it on cinema if only there was one within a thousand miles of my house’ and that’s the problem… so maybe video on demand is the only way some people are going to see it. The reality is that in the past when I look at my films they’re made for a big screen but I know in reality more people have seen them on DVDs than they have in the cinema so it’s just reversed the process a little bit.”

“It is very interesting because my complaint is it seems we’re becoming more and more infantile in that fact, ‘Oh there’s something interesting, I gotta put it in my mouth! I want it know! I’m not going to work towards it. I’m not going to wait. I need it now! And it’s in fact infantile but that’s what we’ve become and I mean, a lot of my films are a resistance to that.”

On the art and privilege of making films:

“Films are pretty extraordinary, and we’re pretty lucky to be able to make them because they’re so intense when we’re doing it. At periods like this there’s nothing before and nothing after. It’s that moment. And you have to be in the moment the full time you’re there. Then it’s over. And then hopefully, it’s like when you look back at films where you’ve done good work. You look back at it happily, proudly, and say, yeah, did all right there. And it’s not much more then that is all you need to look back and not feel ashamed or that you were compromised to the point that you didn’t do what you were capable of, all of those things, so I’m very proud of what we pulled off frankly.” (He laughed).

Making “Don Quixote” has been an obsession for Gilliam, who has said he will still make the film. What stage is he in?

“Right today I don’t know. I knew previously, two days ago. I don’t know anymore. I got an e-mail the other night, so I’m not going to say anything… A man’s got to keep a mind occupied and pretending is the best way to go through life.” (He laughed)