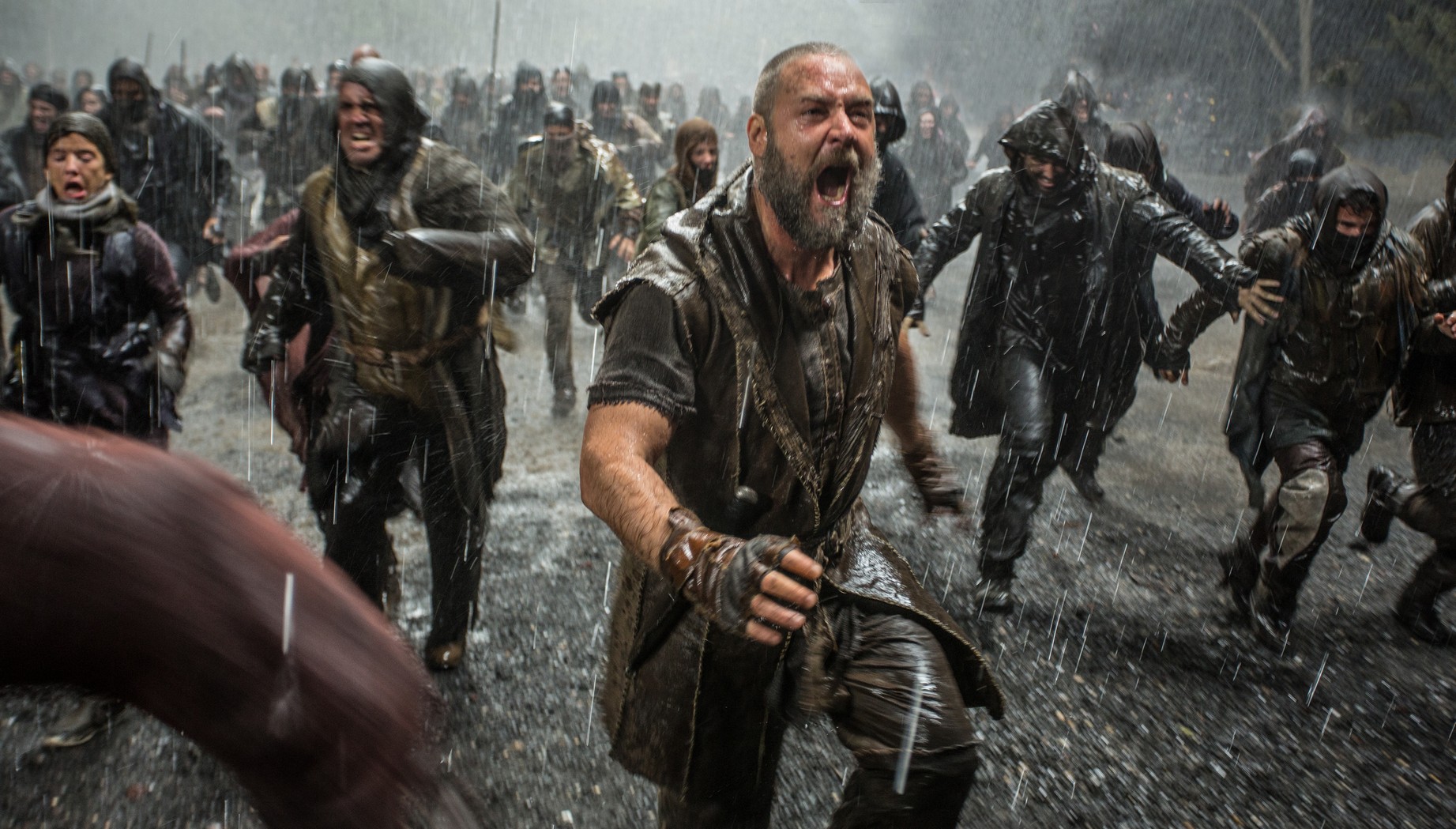 With the box office prospects of NOAH performing below expectations and garnering audience engagement, one wonders what went wrong? It was considered one of the most anticipated movies of 2014 and, so far, one of the most debated. Considering the controversy, it lost the collective interest of the movie going public rather quickly. Achieving $100 million total domestic gross might struggle to achieve which is unthinkable after a $40+ million opening weekend. So what happened? Like all divisive movies, it is complicated.

With lavish cinematography, glorious enchantment, and taking liberties with the story, there’s plenty to admire/discuss/debate in Noah. The performances were effective especially Russell Crowe and Jennifer Connelly. (Emma Watson almost invokes Katniss running in the woods.) Stunning flashback sequences involving Adam & Eve to the creation story to the brief “historical evolution-of-a-solider” montage was captivating cinema that stuck with me. Despite the complaints, the acknowledgment of sin and God (“The Creator”) are in the movie. Not surprisingly, the always dark Aronofsky didn’t shy away from depraved humanity and their fate (especially an eerie sequence of waves crashing as people cling to the top of a mountain). Considering the complex, grim, and redemptive source material, some reactionary audiences can’t handle a Bible Epic.

Despite the concerns and the negative buzz, the biblical themes are on screen (among other things) as Aronofsky embraces the Jewish tradition of Midrash. People have debated the use of Jewish Gnotism. The Watchers (rock people) came across as campy and mystic creatures like out of The Dark Crystal. I will admit the theological sketchy part are when The Watchers, based on supposed fallen angels are (SPOILER WARNING) ascended into heaven by The Creator. Yet, the big deviation from the story (essentially interjecting the climax of Abraham and Isaac) was to build hollow dramatic tension, not to embrace blasphemy nor be theologically malicious. I wish more Christians understood and accepted this. Darren Aronofsky’s ambitious and somewhat flawed NOAH has elicited a divisive response. The discussions, particularly among Christians, have been intense. It is garnering a debate regarding “biblical accuracy” within churches among congregants, theologians, and leaders. The comments on any article posted (especially on Breitbart.com Big Hollywood or Noah’s Facebook page) are passionate and negative. The worst reviews were from Matt Walsh who trolls on negativity and victimization as if it is a Christian virtue (and creationist Ken Ham who wasn’t too kind either). Debating Noah is the equivalent to the heated Wolf of Wall Street discussions from a few months ago…only segmented for people who read The Gospel Coalition, Relevant Magazine, and Patheos. I’ve got to hand it to Paramount for navigating choppy waters so soon and twice with Wolf of Wall Street and Noah turning movies scorned by audiences (a C CinemaScore rating is considered disastrous but has become a badge of honor for challenging movies) into a must see movie!

You can guess who will trash Noah (uninspired people, boring critics, etc.), but I am always caught off guard who defends the movie. Even true blue conservatives who will rant against Obama liked it…and not in a way to support the Bible in popular culture to try to act cool. Open minded, artistic flavorful Christians really dig it. It has delivered quite the rebuke. However, for me as a Christian, we have seen the arrogance of evangelical entitlement grown into fruition with the Noah backlash. The character of Noah is featured in countless religious texts and the director is a proclaimed atheist. We aren’t going to get an orthodox, Juedeo Christian version. It wasn’t going to happen. Darren Aronoskfy, the filmmaker of Requim for a Dream, The Fountain, and Black Swan was never going to make a movie to appease Rick Warren, John Piper, or Mark Driscoll. I was prepared for this to happen years ago. Online, I read complaints from people upset that Noah was drunk in the movie and the environmental themes (from “creation care” to a pre-flood vegitarian diet) which are clearly in the text. D’oh!

I’m annoyed that the environmental themes have become a controversial issue in Noah for Christians. In 21st century America, climate change is becoming an emotional driven culture war issue on par with abortion or gay marriage. It upsets people. Liberals become angry at conservatives obnoxious denial about the deteriorating planet. Conservatives view global warming as a hoax and a secular religion as a threat to stop consumerism bankrolled by a powerful oil industry. It is a silly, cyclical fight. Rob Vaux of Mania.com nailed it in her Noah review when she said, “The Right is dumping on it for its pro-environmental message, which is kind of like condemning the story of Christ for being too sympathetic to the poor.” With Fox News often bashing Pope Francis’ social justice message, I fear what Christianity will like in America a decade from now. With the minor inconsistencies, I’ll take visionary directors adapting the bible over Hallmark Channel proselytizing any day. Speaking of such kind of movie, Gods Not Dead is playing in theaters and doing very well catering to a neglected audience of very conservative Christians. Other Christians were rallying behind it to “make a statement” to see the movie instead. Its box office has been robust, falling 4.5% in business from first to second weekend while opening in additional locations! It peaked last week in 1800 screens! The studio behind it Freestyle Releasing seemed to cash in on the Noah controversy more than anyone. There were gossip laced articles murmuring that Noah didn’t test well several months ago and God’s Not Dead saw an opportunity to promote to that audience. Since Christian themed movies have been inconsistent especially many underperforming last year, it was a risk that paid off for a tiny studio. In the end of the day, it looks like God’s Not Dead prevailed reminding the industry if you want a faithful audience to attend, treat the material with respect.

What made Noah stall among evangelicals and God’s Not Dead succeed was publicity, but their money making potential seems to be obvious. Despite the inconsistency of faith based movies performing at the box office, both movies grabbed the attention of Christian audiences. It now seems two things are needed for a hit Christian movie: white people in Biblical stories or the portrayal of modern Christian cultural victimization. Something like Black Nativity wasn’t going to cut it nor would Rick Santorum discussing the “Reason for the Season” regarding The Christmas Candle. Based on this theory, Hollywood will have at least two more faith based movies play well among Christian audiences in 2014: Ridley Scott’s Exodus and Alone Yet Not Alone (the latter had an Oscar nomination rescinded which played well in the conservative press).  There was a groundswell of Latino support for Noah (which could explain Cesar Chavez movie bombing). Most Christians probably could forgive minor discrepancies in Noah, but when a movie is being sold to Christian audiences by a director bragging about making the least biblical movie ever, let’s not be shocked when it doesn’t connect with faith based audiences. Brand awareness and respecting your audience go hand in hand for cinematic success which is a lesson Hollywood needs to be reminded of time and time again.

2 thoughts on “Noah: The Controversial Biblical Epic for Our Divisive, Reactionary Times”