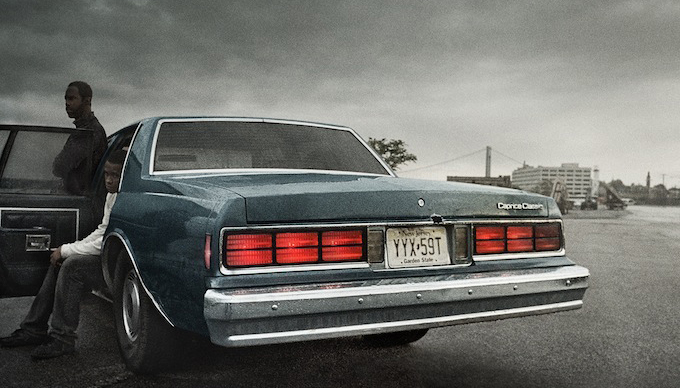 The striking feature film debut of writer-director Alexandre Moors, BLUE CAPRICE is a harrowing yet restrained psychological thriller about an abandoned boy lured to America into the shadows of a dangerous father figure. Inspired by true events, BLUE CAPRICE investigates the notorious and horrific Beltway sniper attacks from the point of view of the two killers, whose distorted father-son relationship facilitated their long and bloody journey across America. Marked by captivating performances by Isaiah Washington and Tequan Richmond, lyrical camerawork, and a unique and bold structure, BLUE CAPRICE documents the mechanisms that lead its subjects to embrace physical violence. BLUE CAPRICE paints a riveting portrait of 21st-century America and a haunting depiction of two cold-blooded killers that will endure long after the lights come up.

Alexandre Moors delivers the bold and captivating Blue Caprice, based on the true events of the notorious Beltway sniper attacks. With such artistic precision, intimate character interaction and fluid developments, and a script so brilliantly refined, it is hard to believe that this is Moors’ first feature film.

Blue Caprice opening with archival footage of the Beltway attacks in no way prepares you for this claustrophobic little box or horrors and manipulative brain sore that sucks audiences in deeper and deeper until your lungs start to shrink into a flaccid pulp all the way to the bitter end. The story is told through the eyes of the killers; a lonely and abandoned teen, and a psychologically damaged man who is out for revenge, no wait, a killing spree, no wait, the American dream, no…full on warped destruction, declaring in a particularly casual scene walking around a supermarket, “kill a cop, a cops funeral, bomb a cops funeral, call in the national guard, total chaos, system comes down.” The story being told through the experiences of the killers allows audiences to try and understand the bigger picture rather than focusing on the end result, which was a wonderfully personal approach and insight such a dramatic string of events. At the start we are invited into the fragile and tactile filming of the treats in tropical Antigua. Although stunning shots are shared with the audience through particular close attention to nature and the elements of earth, wind, and water, Moors has an arresting knack of making it seem like the most isolated and chilling place on earth. It is here that Lee, a sixteen-year-old boy, is unexplainably abandoned by his mother. Withdrawn, silent, and empty, we instantly feel the sheer loneliness of this character. He is hollow. He is played superbly and without fault by Tequan Richmond who wholly embodies a youth in desperate need of guidance and security, which he subsequently finds in corrupt father figure John, played by Isaiah Washington. He is ‘saved’ by John, a perfectly nice American man (or so it seems) who lives on the island with his children and takes Lee in as his ‘son,’ and moves him to the States under false pretences. John encompasses such diverse personality traits that it is hard to put a finger on who he is as a person, making him all the more intriguing. It is honestly one of the most interesting, convincing, and fast progressing character developments that I have seen in a long time. What makes this even more special is the growth and change that we see in Lee due to this development of John. We are seeing the dramatic change of two characters, both as individuals and as a duo. Both the main protagonists are so fantastically acted and deserve nothing but positive credit for their performances. John’s best friend Ray (who has definitely got less screws loose than him) is played by Tim Blake Nelson and emulates similar hillbilly characteristics he has given before as Delamr from O’ Brother Where Art Thou? Just with a bit more hair and a few more teeth. All in all the supporting roles nicely complimented the main two. A bond between a man and boy is explored from many avenues; it is an incredibly sad relationship about love, fear, loneliness, dependency, and desperation. Both males became unhealthily dependent on each other for their respective reasons, realizing that the closer they became and in their current states they could not get through life without each other. Manipulation is a main focus; John uses all forms of guilt on Lee, who is young and naïve enough to be molded into the murderer that John needs to fulfill his sick, sad, sadistic mind. The further into the storyline we get, the greater the corruption becomes, and the warped mind of John explodes onto the screen like fruit ninja gone very wrong. Lee is trapped in a murderous hellhole with a man who has conditioned him to love him and need him, thus do anything and kill anyone for him. There is a particularly memorable scene pouring out stunning symbolism when the blue Caprice is filmed from behind on a clear highway with the vastness of the outside world surrounding the suffocating blue box. With chilling choir singing in the background omitting a warped mesmerizing calm. Moors not only explores the bond between impressionable Lee, and John the crazed maniac who progresses from fairly normal to too far gone as the murders rack up, but also the evolution of random attacks and what drives civilians to commit them. These focuses are far more concerning than the crimes themselves, the ignition behind the terror – reasons that society is still trying to determine. This situation is all too familiar within the United States from school shootings, to random attacks, to planned assassinations, which seem to allude to the amalgamation of mental health issues, a cry for attention, a sense of alienation from mainstream society, a fault in the system. The film doesn’t pretend to have any explanations, the reasons remain unanswered, which I believe gives Blue Caprice even more class and respect.