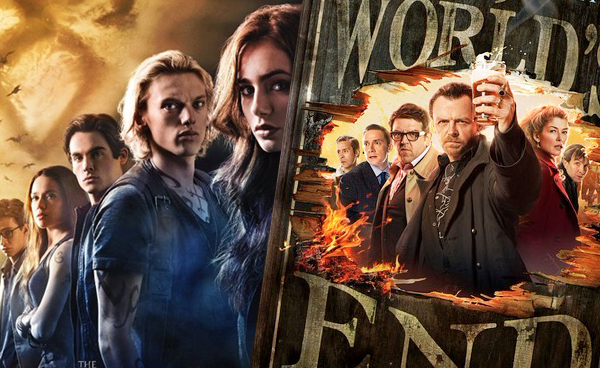 The Mortal Instruments: City of Bones is an action, adventure, and fantasy film based on the first book of The Mortal Instruments series by Cassandra Clare. The setting for the film is modern day New York City with an emphasis on urban contemporaries. Why is this important? Because City of Bones is yet another young adult adaptation aiming to collect on the success of its predecessors, such as the Harry Potter series, the Twilight franchise, the Hunger Games saga, and even the almost there but not quite Percy Jackson epic. Clare’s books are in fact still on-going and to date there are five books released with a sixth on the way next year in March. The point is there is a lot of story to film adapt and it’s the obvious hope of the studios/parties involved there will be more. (See: Sigourney Weaver has already joined the cast for the second film).

The real question is, is it any good? I’m here to tell you, I’m really not too sure. The fun thing about Harry Potter, Twilight, even the slightly more complicated narrative of Hunger Games is they’re easy to follow in that they possess singular and simple concepts, i.e. “a school for wizards”, “a human who loves a vampire”, “poor/lower class society fighting in upper class society’s tournament to the death”. Those are relatively condensed generalizations but that’s the point of a successful book to film adaptations, it’s the quick hook to get an audience to want to watch. The Mortal Instruments: City of Bones isn’t like that, it’s complicated.

The Mortal Instruments deals with a coming of age story where young girl/adult learns she is a part of a secret society of Shadowhunters. A Shadowhunter is a half-angel/half-human who has been fighting a never ending centuries old war against demons. The Mortal Instruments in some ways is a more complex, mythos-centralized Twilight, whereby it takes on the same dynamics that Percy Jackson presents in that everything we know about ‘monsters, werewolves, vampires, angels, etc’ is real. (Note: Percy Jackson isn’t about all that; my example is that its setting is that everything we know about Greek mythology is in fact real). The world of The Mortal Instruments doesn’t stop there however as it uses magic, rune stones, and a plethora of other mystical natured goodies to further embellish its own mystery. In the end, it’s purposefully complicated because it wants to be. For a book it probably works, but as a film it becomes messy.

City of Bones appears to be a competent entry with its progressive (literally and figuratively) story, but its purposefully complicated nature could prevent it from being anything more than a modest/fringe box office success (see: Percy Jackson). For fans of the books, I’m sure it’s exciting to see the film adaptation on-screen as The Mortal Instruments is definitely a lot more action oriented, almost in the vein of the Underworld franchise. As a newcomer to the film and story, I was somewhat sold and unsold at the same time.

I still don’t know what to score this film, so I’m throwing a 4 or 6 out there. The World’s End is a British, science fiction comedy by Edgar Wright, written by Wright and Simon Pegg (who also stars in the film), alongside with usual suspect Nick Frost. The three are joined by Paddy Considine, Martin Freeman (“I’m going on an adventure!!!”), Eddie Marsan, and Rosamund Pike. The World’s End is the third and final film in the Three Flavours of Cornetto Trilogy, the first being Shaun of the Dead and the second being Hot Fuzz. If you’re a fan of either of those two films (safe bet is probably both) then you’re aware of The World’s End.

The final film of the trilogy follows Simon Pegg as Gary King, who is resolved to track down his estranged friends and complete the Golden Mile, an infamous pub crawl encompassing twelve pubs in their hometown of Newton Haven. The group of friends (Nick Frost as Andy Knightley, Paddy Considine as Steven Prince, Martin Freeman as Oliver Chamberlain, and Eddie Marsan as Peter Page) had previously attempted the feat some twenty years earlier but failed. In an effort to rekindle their youth and lost friendship over the years the five set off to their hometown to undo what Gary believes to be their greatest missed opportunity. However it soon becomes clear that since leaving Newton Haven, not everything is as it seems.

That’s the general summary for the film and I won’t get into the storyline anymore than that, as The World’s End is an adventure. It’s a kind reminder to what the Cornetto Trilogy has been about and it’s clear this film alongside the first two will join the eventual ‘cult classic’ status. For me, The World’s End is my favorite of the bunch, it’s more emotionally engaging while still keeping to the relative insanity the first two films presented. Wright works to make the characters and storyline more tightly knit and the end result is an incredibly fun watch. It’s been a subtle refinement over the course of the entire trilogy and while I’m sure others will arrange what film is their favorite differently, that’s joy of it all. Fans of Shaun of the Dead and Hot Fuzz should be sure not to miss out and even for newcomers it will be a welcomed surprise.

The World’s End gets an easy 9.

One thought on “Quick Reviews: The Mortal Instruments: City of Bones and The World’s End”