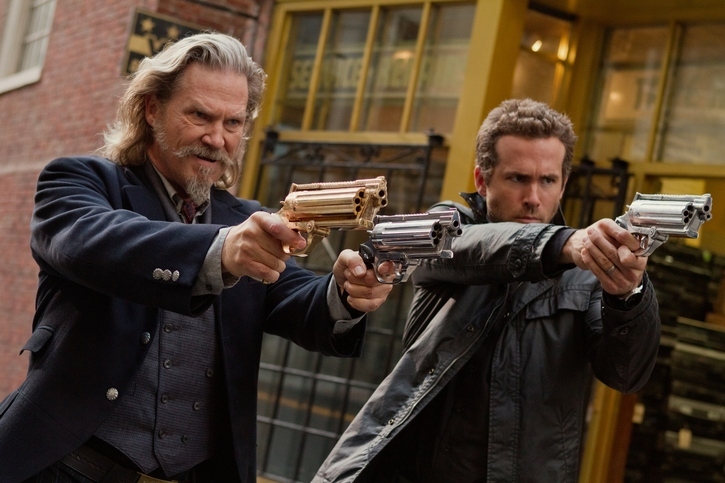 R.I.P.D is a supernatural action film based on the comic book ‘Rest in Peace Department’ by Peter Lenkov and published by Dark Horse Entertainment. The film adaptation is directed by Robert Schwentke (RED, 2010) and produced by Universal Pictures. It follows the afterlife of recently slain cop Nick Walker (Ryan Reynolds) as he joins a team of undead law enforcement officers working for the R.I.P.D (aka Rest in Peace Department). The R.I.P.D is in charge of the monitoring, concealing, and capturing of the deceased who refuse to pass on into the afterlife (see: accept their judgment of either going to heaven or hell) and instead decide to forcibly remain in the world of the living.

It’s that unknown layer of the world, much like Men In Black (1997) presented with the notion of aliens having been on the Earth for a long time, living amongst us, but the MIB help monitor, conceal their presence. R.I.P.D plays on that concept and even borrows the same notion of the buddy-buddy cops with Nick Walker the latest undead rookie being teamed up with undead veteran Roy Pulsipher played by Jeff Bridges (whose hilarious performance, made the film enjoyable).

That’s the concept in a nutshell, as the film despite its 96 minute runtime, takes a bit to get going as the mandatory reasons of why/who/where/what/when all need to be established within the first 10 minutes of the film. (After all it’ll be these reasons which lead to the expected end of the film.) R.I.P.D is formulaic, it is average, and it is very much what you might expect (or maybe not really expect much from). Yet despite the extremely bad press going into the film’s release, the label of “bomb” (which I mean, it really is in terms of the box office), I found myself enjoying it in the average sense of the word. And for that, in terms of a score at the end of this review, I’m going to give it full marks. It’s not as unbearable as other critics might say, it isn’t as absolutely boring as it’s being cast as, and it’s not as (sensationally) bad (as one reviewer has said) as 2010’s Jonah Hex (which was ultra bad). It just isn’t genuinely fresh but that’s the disappointment with R.I.P.D as it tries to fool you to thinking it is actually better than what is being portrayed. The truth is, it isn’t and the trailers did not indicate or say to expect more than what it is you see.

However the moderate or mild interest the film holds is the veiled curiosity the world R.I.P.D presents. This investigative notion of who forms the Rest in Peace Department and in general, how they go about their day-to-day law enforcing of the undead still roaming the Earth. It’s not as charismatic as Men in Black and while the comparisons are expected and/or warranted, it is a missed opportunity mainly because in my eyes I saw an opportunity to be even more creative. We see glimpses based on the costume design and slight environmental exposure of the R.I.P.D but if the hope was to create a franchise out of this film. Well, it’s pretty obvious that is not going to happen. Simply put its done better in films like the Ghostbusters (1984) or Hellboy (2004), showing the audience more than they can imagine and allowing them to become intrigued in the mysteries.

You really need to wonder nowadays why films hold back or maybe in this case I’m giving more benefit of the doubt to R.I.P.D and either I’m right or wrong and the source material is average as well. The comic book world tends to lend itself to the fantastical, which is why we see so many film adaptations today. Hollywood allows these mediums to come to life in a way only film can do, so another part of the disappointment is when a film with a $130 million dollar budget flops (that’s how much R.I.P.D cost). But is it really that expected or unexpected? I could tell you of the storyline involving Walker being a corrupt cop, along with his partner Bobby Hayes (Kevin Bacon) and how Bobby betrays him and kills Walker causing his untimely demise. Thus Walker leaving his beloved wife Julia Walker (Stephanie Szostak) behind (and becoming the reason Walker accepts joining the R.I.P.D in hopes of reuniting with her even though he’s dead). I could also tell you about the general end of the world-esque plot revolving around “reversing” the portal from which the dead souls get judged (think of it like a giant vacuum sucking the dead upwards and what would happen if the vacuum goes from suck to blow [see: Spaceballs, 1987, totally unrelated reference but I had to]). I literally just spoiled the first 10 minutes of the film and the climax of the movie for you, but I really haven’t ruined watching R.I.P.D at all – because simply put, that is how average it is.

This leads me to the characterization throughout the film as I’m trying to think back on the last Ryan Reynolds film I’ve actually enjoyed. All I can think of is how Hollywood has done its best to push him on us and the audience has slowly but surely rejected his films which are all seemingly average as well. He somehow has a penchant to play cool-esque characters like that of National Lampoon’s Van Wilder (2002), Blade: Trinity’s (2004) Hannibal King or Monty from Waiting… (2005). There was his role as Richard Messner in Smokin’ Aces (2006) a film which was decidedly messy, violent, and a flip of a coin of either liking it or not liking it. I thoroughly enjoyed Definitely, Maybe (2008) and then he went back to low-key-esque side roles like that of Adventureland (2009). He was cool as Deadpool in X-Men Origins: Wolverine (2009) until the final act happened. Then seemingly found success with The Proposal (2009) which I enjoyed, and there was the interesting Buried (2010). Then Green Lantern (2011) happened, followed up by The Change-Up (2011), the just okay Safe House (2012) and his more recent selection of films in 2013 of The Croods, Turbo, and R.I.P.D.

If I have a Ryan Reynolds point to make here, I think he was miscast. Reynolds is capable of playing the dry, witty, sarcastic character that R.I.P.D needs but instead it looks like he’s too serious for his own good. To the point where he’s not even enjoying being in the film, which is a stark comparison to what Jeff Bridges brings and carries throughout. In some ways it’s the reversing of Agent J and K from Men in Black but there is no balance in R.I.P.D and not enough time to warrant the slight/necessary development. It’s not the say the film should’ve been longer, the overall characterization for Nick Walker could’ve been much better. Only Bridges’ Pulsipher is enjoyable and makes us want to see him and the antics of the R.I.P.D more. We don’t care for Walker’s dry presentation given the world he’s been thrust in, the disbelief is momentary, and the shock is uncaring. There is no stringent absolutely ‘by the books’ cop persona which as an extreme would’ve been welcome. It could’ve played differently with a loose/tight dynamic leading to the eventual trust between Bridges’ and Reynolds’ characters. Instead Walker is just an almost-asshole who only his original partner could probably stomach (or doesn’t because he shoots him dead). It’s not believable for a second that Reynolds’ Walker is that uptight, given its Reynolds cast and playing the role.

Regardless, the character performances including Bridges (who is definitely memorable here) aren’t unfortunate enough due to the lackluster everything regarding R.I.P.D. In the end there isn’t so much wrong about R.I.P.D but more so what could’ve been done differently. The film isn’t terribly average, it just is average with moments (mainly Jeff Bridges) that you might find yourself enjoying one day but at the cost of a cheap admission price, on Netflix down the road (or not at all, because that’s okay too).

I give R.I.P.D a 6 out of 10 (with an honorable mention to Roysephus Pulsipher and his hunt for sexy ankles).