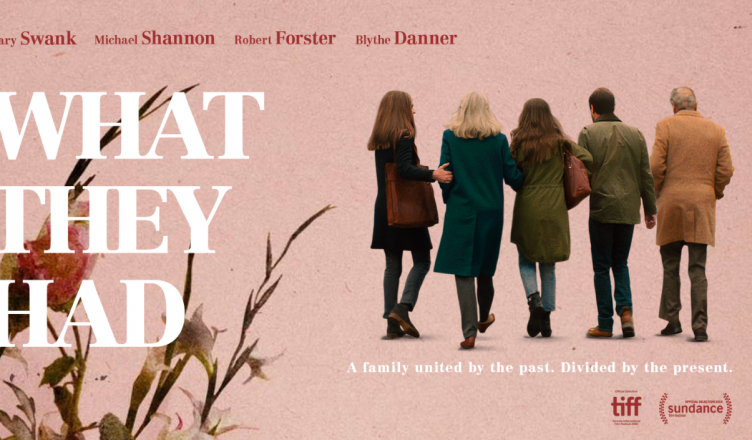 Writer/Director Elizabeth Chomko, winner of a Nicholls Screenplay Fellowship and sometime actress, has crafted a touching look at a brother and sister forced to deal with being “the sandwich generation,”—adults with lives and children of their own, who are obligated to help care for their elderly parents. As is often the case, one of the siblings lives in town with the parents (in this case, Chicago) and the other is on the west coast, making things even more difficult. When Ruth wanders off the night of a blizzard and gets on a train bound for Aurora, the entire family unit comes together to decide what should be done next.

In this case, the elderly parents are played by Blythe Danner and Robert Forster.  They are the best possible choices for their roles. Congratulations on securing them! The siblings are played by Michael Shannon and Academy Award-winner Hilary Swank. Swank has a college-aged daughter of her own, played by Taissa Farmiga, sister of Vera (21 years younger) who is a staple of late on television’s “American Horror Story.” What a cast!

The script that Chomko labored on for 7 years is good. It has warmth and humor and a symbolic thematic touch (a turkey) and she shared that she had rewritten it over a 7-year period, based on her own family and relationships. Robert Forster referenced the script, from the stage, as “Great dialogue” and the fact that it all works so well is more remarkable when you learn that the cast had no rehearsal, but met only two days before filming at a dinner.

There was a suggestion that blockbuster actor par excellence Michael Shannon got involved because he heard about the script. Producer Albert Berger, who was present on October 15, 2018, admitted that he wasn’t quite sure how Shannon ended up as a cast member, but that, since Chomko is from Chicago and Shannon has Chicago ties, it was serendippity.

Robert Forster will forever be remembered as the lead in Haskell Wexler’s 1969 film “Medium Cool,” a film shot by Wexler (better-known as the Chicago born cinematographer who shot “One Flew Over the Cuckoo’s Nest” and “Who’s Afraid of Virginia Woolf”) against the backdrop of the 1968 Democratic Convention in Chicago which featured major protests against the war in Vietnam, and major beat-downs in Grant Park. Like John Travolta, Forster enjoyed a career resurgence courtesy of Quentin Tarantino in “Jackie Brown.”

I saw Forster as I entered the theater and immediately told him I  admired his work on television’s “Breaking Bad” and “I’m Dying Up Here” (Showtime), but that “Medium Cool” held a special place in my heart. He was more than happy to pose for a few photographs, while maintaining that I had been too young in 1969 to remember “Medium Cool.” (Forster was then 37).

Forster is the perfect Norbert Everhart, husband to Blythe Danner’s Ruth, With lines like, “She’s my girl. You can’t take my girl away from me,” we see a long-time marriage to a woman dealing with dementia burgeon into the same sort of decision-making process for the rest of the family that Laura Linney and Philip Seymour Hoffman faced in 2007’s”The Savages.” It is also the story of a husband standing up for his wife and for their right to try to remain independent in old age.

This is a dream cast for a first-time filmmaker. There is no one who could have done a better job in these roles than the cast chosen. Kudos to all of them.

In addition to the title, which is not memorable enough, there are too many themes crammed into the main one that emerges. To wit:

That is A LOT of themes to try to incorporate into one movie. The main hurdle finally became deciding which one of those themes is going to carry What They Had. Writer/Director Chomko acknowledged, when asked about the greatest challenge she faced, “That was a challenge. You can only ask an audience to connect to so many roles.  It’s hard to kill your babies.  It just sort of evolved.”

Hard as it might have been to do, I think I would have “killed” the daughter sub-plot. If not that one, the implied denouement of Swank’s marriage to Josh Lucas is a bit of a downer in the context of this otherwise heart-warming film. Realistic? Perhaps, but just as many realities would have seen the younger couple continue to try to make it, since “Ed” seems to be trying hard to please his wife. And Forster’s father character says, at various points, “There’s no bells and whistles. Love is commitment. Better or worse. Sickness and health.  Till death do us part.”

If you don’t find something to take away from this well-done first effort, then you have been living alone in a cave and have no family entanglements. Anyone with a family should be able to relate to at least something in this film, and the actors do a terrific job with a more-than-adequate script that Writer/Director Chomko acknowledged at film’s end required her to “trust what was in here” (tapping her heart). Knowing how the Hollywood “notes” from others works and how many other so-called experts probably inserted opinions into her vision, it is easy to believe that remark, made from the stage by first-time Director/Writer Elizabeth Chomko.