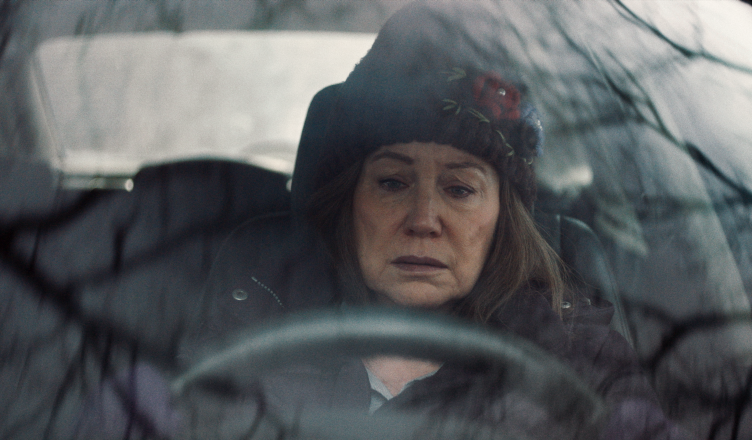 Diane, written and directed by Kent Jones (Martin Scorsese is an executive producer), received the top prize of Founders Award for Best Narrative Feature at the Tribeca Film Festival. Diane, which is Jones’ narrative directorial debut stars Mary Kay Place (“Mary Hartman, Mary Hartman,” “The Big Chill,” “Being John Malkovich”), who is in every scene of the film, and gives the stand-out performance of her career.

The veteran actress plays a septuagenarian, a widow who lives alone in rural Massachusetts, spending her time serving others, whether working in the local soup kitchen or caring for her beloved friends and relatives. But her main preoccupation and heartache is her drug addict son (Jack Lacy), who has made a mess of his life and is continually in-and-out of rehab.

This intimate female-centric character study is wrenching, tender and affecting. Not much happens except life. And it plays out as beautifully on screen as an exquisite chamber piece. There’s also remarkable cast of wonderful woman actors that includes Andrea Martin, Estelle Parsons, Deirdre O’Connell, Joyce Von Patten, Phyllis Gallagher and Glynnis O’Connor. (Paul Mcisaac is also in the cast.)

My favorite scene in the film is one in which Diane guzzles margaritas at her local dive bar, dancing to music on the jukebox as the years seem to melt away. By the way, Mary Kay Place’s dancing is terrific and the scene manages to be both mournful and amusing.

I spoke to the veteran actress on the red carpet at the movie’s premiere, before Diane won the festival’s top film prize, where she wore a mini dress and looked decades younger than she did on screen. (Place also appears in another film at the Tribeca Film Festival, Meredith Danluck’s “State Like Sleep,” in which she has a supporting role.)  .

Following are highlights from the red carpet:

What was it like to be in every scene of the film?

Mary Kay Place: It was really exciting and fun and very challenging in terms of stamina and just every scene was intense and required a lot of presence and so it was challenging. And then remembering my lines. I loved it! We had such a lovely, intimate crew and cast and it was really like a family.

It is so rare to see a movie told from the viewpoint of a woman this age. Do you think there is a seismic change about to come and more diversity in the voices we hear on the screen?

MKP: I don’t know there will be a seismic change because every time you think there is there isn’t, but let’s be appreciative I decided to myself. I appreciate everything that is happening and hope and pray for more because we have to balance out the feminine with the masculine archetypal energy to get this thing going. There’s a shift that feels like it’s happening. Let’s see if it continues and grows.

You’ve been in the movie industry a long time. Was the stuff that came out in the YouToo Movement a revelation to you? Do you have any personal experiences of harassment?

MKP: Not those kind of problems. Not the assault, rape problems, no. But this is part of our culture and has been, particularly for my generation. Part of it is we never learned how to deal with it or take care of yourself. But certain people weren’t so lucky because they had more physical aggression. I didn’t have any of that. I had wonderful mentors. Definitely has been for a long time, not just in show business, the whole culture of the world has been patriarchal and abusive and taking power over woman. But I think there is shift occurring.

How did Diane come about with Kent?

MKP: In 2013 we were both serving on the jury at the Berkshire Film Festival about the last five or six years and that’s where we met. About the second year he told me, ‘I’ve been thinking for a few years about writing a script about my mother, my aunt and her extended family. And when I saw you in The Rainmaker — the Francis Ford Coppola film — I thought you could play my mother.’ And he said, ‘I’ve been wanting to write this script,’ and you know, people say that and you don’t know if they’ll do it.

What inspired your performance?

Do you think your character finally finds peace and forgives herself for her mistakes?

MKP: I think she begins to forgive herself. And I think when you’re in that age, you get older, you go, ‘Shit, I’ve lived through all this stuff! I’m gonna give myself a break now.’ Hopefully!! I hope that’s what the reflection of life is, that we start to have an inner life you begin to give yourself a break I think and appreciate what you’ve learned from the struggle of the other things that we all go through. I hope so anyway. I think we should.