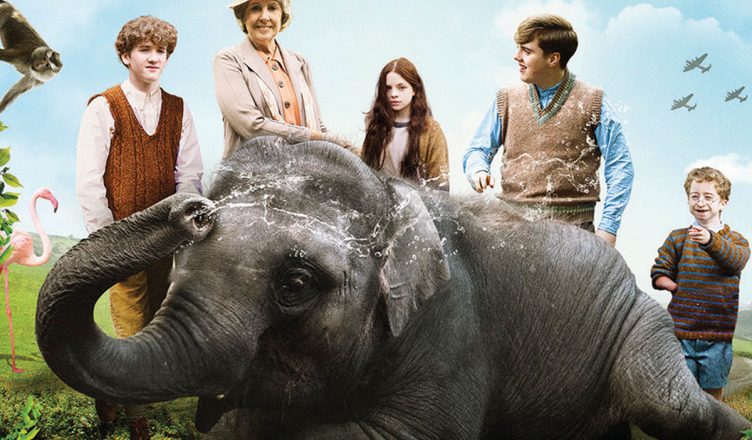 “Zoo,” written and directed by Colin McIvor, is the true story of how a lonely widow and three schoolchildren banded together to save an elephant in the Belfast, Northern Ireland zoo (the Bellevue Zoological Zoo) to prevent the pachyderm from being slaughtered during World War II.

Belfast had two major bombing raids on its populace during World War II, killing over 1,000 people. In light of the blitzkrieg by the Luftwaffe,  in  April of1941, orders went out to slaughter 33 of the animals in the zoo, to prevent them from running amok amongst the populace should the zoo be hit. Even Hugo, the giant rat, and Gilbert, the Barbary lion, were killed.

The zoo veterinarian’s son, Tom Hall (Art Parkinson)—an animal lover of the first magnitude (“I would never harm an animal”)—takes it upon himself to rescue an elephant named Buster. The name Buster seems to be an homage to comedic actor Buster Keaton.

Tom’s father, Dr. Hall, has gone off to war and Tom’s mother, Emily (Amy Huberman), is a nurse ministering to the sick and injured.  Once the directive saying, “All potentially dangerous animals must be destroyed” goes out, it becomes Tom’s mission to organize 2 good friends and classmates, Jane Berry (Emily Flain, age 11) and Peter (Ian O’Reilly), to assist him in breaking the elephant out of the zoo and hiding it somewhere to keep it from being euthanized.

A lonely widow (known later as “the elephant angel”), Mrs. Denise Austin, also enters the plot, agreeing to let the young people hide the beast in her brick-enclosed back yard. Her son was killed in Belgium in World War I and she is portrayed as friendless prior to throwing in with the youngsters to save the elephant. Denise Austin is played by Penelope Walton, known to viewers as Isobel Crowly on “Downton Abbey” from 2000-2015 and a much-decorated British actress. Mark Thomas’ music is well-suited to the material and the costuming by Claire Ramsey is very authentic to the period. Director of Photography on the film was Damien Elliott. He makes Northern Ireland (where it really was filmed) look gorgeous.

Art Parkinson, who plays Tom, plays Rickon Stark in “Game of Thrones” and also played Kubo in “Kubo and the Two Strings.” Ian McEhinney, who plays Mr. Shawcross here, is also a “Game of Thrones” regular as  Barristan Selmy.  The cast does a nice job with the material. One of the most amusing parts was watching the drills where students were put in a truck and gassed, to see if their gas masks were working properly. The character who plays Peter (Ian O’Reilly) says, “Surely this is not on the curriculum: gassing the pupils.”

The “name” actor that audiences may recognize is Toby Jones, who plays the Security Guard and ticket seller/ticket taker at the zoo. Toby plays Charlie and doesn’t even get a last name for his character. Toby Jones is most recognizable for once playing Truman Capote in a bio flick (“Infamous,” 2006) and for playing the mad scientist on the television series “Wayward Pines” (2015-2016). Jones will also be appearing in “The Snowman” later this year and appeared in “Harry Potter and the Deathly Hallows,” “Atomic Blonde,” “The Hunger Games” and “My Week with Marilyn.” Jones is widely regarded as one of Britain’s premier actors. It was a shame that he was given such a small part with so little to do.

The elephant portraying Buster was actually Nellie the elephant. This made me wonder about the elephant casting. Surely a male bull elephant looks different than a female? It is true that we mainly see the trio scrubbing Buster’s hairy back  in lighthearted moments or leading the beast through the woods at night by means of a rope, but Nellie does not sound like it would be of the same gender as an elephant named Buster.

The film is premiering in Chicago on October 14th and will open in the United Kingdom in 2018.