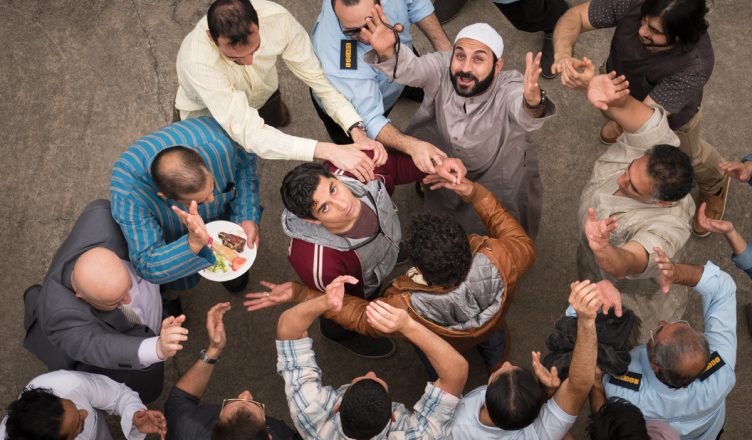 Two comedies have been screened for critics at the 53rd Annual Chicago International Film Festival during this lead-up week. ”Ali’s Wedding” from Australian director Jeffrey Walker, reminds most of the recent hit “The Big Sick.” “Maktub” (“Fate”) from Israel director Oded Raz featured Guy Hamir and Hanon Savyon, both Israeli television stars in such TV series as “Scarred,” “Asfur” and “Ma Bakarish.”

The Australian film “Ali’s Wedding” starred the real Ali (Ali Basahri) just as “The Big Sick” was written and performed by the real person who lived that story, Kumail Nanjiani. In this lighthearted film, Ali, the son of a popular Muslim cleric, is expected to do well on the examinations to become a physician.

When Ali does not score high enough, he conceals that fact and lets the congregation think he has scored the second-highest score on the exams—in the 90s when he was only in the 60s. Ali even attends classes, although not technically admitted. Ali also is hiding his love for Dianne Mosen, the daughter of the Lebanese fish and chips merchant, who has a very over-protective single father.

It is only a matter of time before the house of cards (lies) that Ali has begun to tell will collapse and trap him, causing anguish for him, his family, and his friends. There is even an “arranged” marriage with another girl that Ali somehow becomes entrapped in, when all he wants is to be with Dianne. Dianne did score high enough to enter the University of Melbourne, but her father has grave misgivings about a girl going off to the University of Melbourne to become a doctor.

Don McAlpine was the Director of Photography and the 3 brothers in Ali’s family represent modern-day influences on Muslim youth, while the old traditions attempt to be enforced by the Muslim elders. In that respect, there was another similarity to “The Big Sick,” with its tale of the many eligible girls who would be suitable mates for Kumail in an arranged Indian marriage, as they are invited to “drop by” for dinner by his meddling parents.

The Sydney Symphony Orchestra provided the score and the film opens with Ali (Ali Basahri) driving an out-of-control tractor through an Australian field. The many situations that Ali gets himself into are both amusing and also telling of the ongoing cultural battle between the old and new order in a modern country like Australia.

“Maktub”, by contrast, has two fast friends (Guy Amir and Hanan Savyon as Stephen and Chuma), who are mob enforcers for a small-time gangster named Kaslassy. The destiny of these two small-time enforcers for a Jerusalem mob protection racket irrevocably changes when they survive a suicide bombing in a restaurant. The $400,000 in a suitcase carried by another member of the gang remains intact, but the large criminal with the glass eye that the briefcase was attached to is toast.  Recognizing their great good fortune in surviving, Steven and Chuma wind up fulfilling the wishes of those who leave notes at the Wailing Wall.

Some of the humor comes from the fact that women are only allowed to approach certain parts of the Wailing Wall and men go to a different area. Therefore, in order to access the women’s side, each man is seen in drag at various points and the assumption, for humorous purposes, is that one or both men have become “trannies”.

There is a backstory involving Steve’s small son by his ex-girlfriend Doniasha. The boy may or may not be Steve’s biological offspring. Steve is loathe to parent the winsome child. Since Steve was once told he was infertile by a fertility clinic, he refuses to believe that the cute little boy who only wants his father to attend his soccer game is really his son and does not do the right thing in parenting him. Chuma tries to cover up the fact that Steven does not believe the child is his and, while paying frequent visits to Doniasha, finds himself attracted to her.

Zaful, the large Telly Savalas look-alike who provides muscle for Boss Kaslassy, has a wife who longs to have a child, but is 40 and fears it will never happen. All these random components come together at the climax of the film, to prove that “Maktub” (“Fate”) really can step in and change one’s life. Apparently “mitzvahs” (good deeds) can (sometimes) change one’s life.