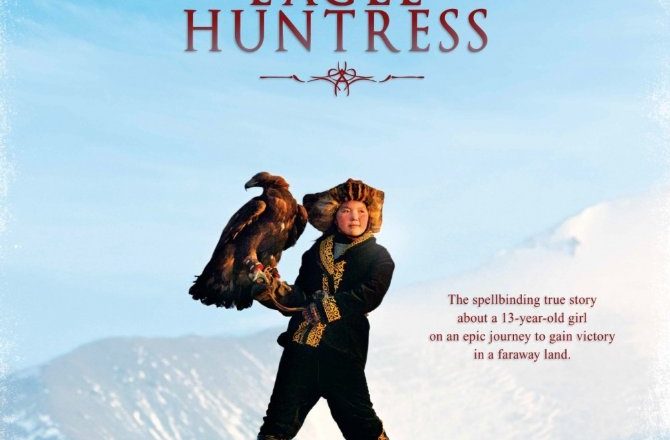 “The Eagle Huntress” follows Aisholopan, a 13-year-old girl, as she trains to become the first female in 12 generations of her Kazakh family to become an eagle hunter and rise to the pinnacle of a tradition that has been handed down from father to son for centuries. It was one of nearly 5 films I saw that promoted the idea that women deserve and can achieve independence and fulfillment on their own terms.

The cinematography is breathtaking. It is filmed in the Mongolian steppes and my colleagues present at a special Lake Street 16th floor screening in Chicago (a small theater set aside for critics) speculated that drones must have been used to capture the sweeping aerial shots that duplicate what an eagle would see while striking. (See discussion of cameras used in the accompanying trailer).

The story begins after Aisholpan has been training with her father’s eagle for many months. Since an eagle can only have one master, she must capture her own. They try to take the eagles when they are 3 months old, a point when the birds can survive without their mother but not yet fly. They are also returned to the wild after 7 years so they can reproduce.

The documentary was one of many I saw at the Chicago International Film Festival that underscores what we in the U.S. would call feminism. Not one, but as many as five films highlighted the struggle of young girls and young women to become more independent and self-sufficient.

In Aisholpan’s case, she wants to crack the same glass ceiling currently being cracked by one of our U.S. political candidates, so it is quite timely (if about 50 years late, IMHO). No girl has ever been allowed to become an eagle hunter. But both Aisholpan’s mother and father are unfailingly encouraging, saying things like, “But I think boys and girls are equal” and “Girls can do anything boys can do if they try.”

Daisy Ridley of the new “Star Wars” narrated the film, supposedly having seen an early cut and being deeply impressed. She wanted to be more integrally involved and became one of the producers of the film.

Some of the elder people of the tribe disapprove, of course, but when Aisholpan gets her own eaglet and trains it to triumph at the annual competitive event, it is clear that even on the frozen steppes of Mongolia change is coming.

There is no “plot,” per se. You just know that Aisholopan is going to win the contest and all will be sweetness and light in the land. It’s a bit too saccharine for my tastes as it lacks much conflict.

It would have been more authentic for me if the old men of the tribe had denied Aisholopan the right to participate when she arrived in their midst. I base this on my longtime coaching of an Optimists’ Oratorical Competition that was sponsored for boys only in the late seventies. One year, (after I had volunteered my time and talent for approximately three years), a girl came to me and said, “Why can’t girls compete?”

Never having thought about that issue, I told her that as far as I was concerned they could compete and went to the Superintendent of Schools and told him that, unless girls were allowed to compete that year, I wouldn’t be donating my time to coach students for the contest.

Far from accepting this new turn as progress, I was called on the carpet by the Superintendent of Schools in Silvis, Illinois (William “Bill” Lamb) who had been pressured by a local businessman who was an officer of the club and I, in turn, was pressured to change my mind. The girls were not allowed to compete; I refused to budge from my stance and was labeled a “troublemaker” when the contest died that year.
The next year I sought out an alternative competition that would allow both male and female contestants (Modern Woodmen).

So, for me, the placid way in which the nay-saying elders simply let Aisholpan compete was at odds with what I, personally, experienced in a similar (yet not as picturesque) setting—although we can all argue that it was because of the passage of time that girls are now being allowed to advance in some cultures. (Certainly not all cultures, however.)

Sia sings a song at the end of the piece entitled “You Can Do Anything’ and given her celebrity, it could turn up on some awards docket.

An uplifting, beautifully photographed documentary, if a bit too predictable for my tastes.