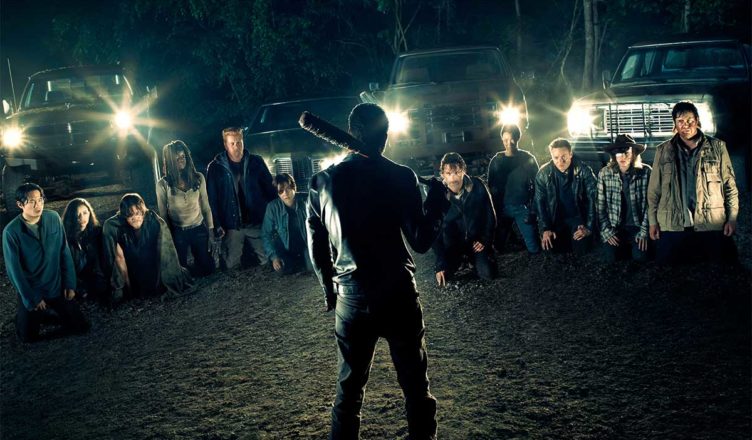 I’ll be live blogging the walking dead panel here! Check back for updates.

The event is beginning and right now they are showing recaps from last season.

The crowd is going NUTS!

5:20 PM: They are showing vignettes for each of the characters that were at the Neegan scene at the end of last season while Neegan waves around Lucille while repeating the phrase “eenie meenie minie moe”. I’m assuming these are TV spots.

5:54 PM: Some days and hype man is still working the crowd. I can see stars peeking from behind the curtain but we’re still waiting to start. I have noticed there are about 17 seats on stage so I guess there will be a big turn out.

At about 6:15 PM the panel was finally starting. The moderator for the event was revealed to be Chris Hardwick. Hardwick was a good as a moderator and kept the momentum moving once they were finally ready to begin. A large portion of the cast attended the panel:

Harowitz then took the opportunity to ask each of the stars generic enough interview questions that the cast genuinely seemed unprepared to answer. Then again we’re talking about professionals but I didn’t see a benefit to fake being unprepared. Questions like inquiring about the mindset of their characters after the developments of season 6 produced some interestingly long, (and occasionally off topic), responses from the stars and even resulted in some comical moments like the leaning tower of Sonequa’s hair.  Lauren Cohen was at one point crying uncontrollably which made some folks in the crowd wonder if her emotional response had any bearing on the mystery thats persisted all summer about the identity of Neegan’s brutal bat beating at the end of Season 6.

Michael Cudlitz brings to light that the whole world is in love with Sonnequa and her husband (?) is a very lucky guy. In fact he went at length to discuss their characters’ developments over last season and share how their characters evolved to the point that they are now attracted to one another. More than once I couldn’t help but wonder if it was all just acting which I have a big problem with as I have every intention of being Sonnequa’s rebound guy after I find out how to get rid of that chump husband. Michael’s now on my list.

Also, did I mention that Seth Giliam was late? Oh man, Harowitz immediately acknowledged his presence and began to ask the actor about his characters’ developments last season from a person who wasn’t really getting along with the team of folks he banded with, who tried to commit suicide a few times, who tried to have his group expelled from Alexandria to a person who seemed committed and was a role player in Rick’s regime. Giliam rambled for a bit about how his character struggled with his own inner demons and showrunner and director Greg Nicotero chimed in and offered that moment when Father Gabriel protected Rick’s daughter Judith as a turning point for Gabriel as well as his relationship with Rick.

The panel was capped off with a new sneak peak for the show that picks up around the same time that last season ended and it looks like things have gotten out of hand for Rick.

The panel only allowed for 2 questions from fans due to the limited time, (The panel started about 45 minutes after the scheduled time), and the first question was generally refreshing:

“If you could play any other character on the show who would you rather play?”

For the most part the cast was unanimous that they would love to portray fan favorite Daryl Dixon. The one brave contrarian was Austin Nichols who confessed that he would have loved to portray my personal favorite character from the show Shane. All in all the panel was entertaining if not a bit concise. A great hype man and DJ kept the crowd in high energy and spirits until the panel was ready to begin and the actors each spoke at least once and gave a bit of insight into the actors, the show, and how they feel about the show. The actors didn’t pose for any photos or shake any hands. There was a bit of a mini scuffle over a hat that Norman Reedus threw into the crowd as a giveaway. The panel did great at building my excitement for the new season but I couldn’t help but wish that there was more time devoted to the panel itself. Each actor was asked just 1 question from the moderator and there were only 2 questions from the crowd which isn’t great considering the amount of money, time, and effort is required from fans to see the stars.