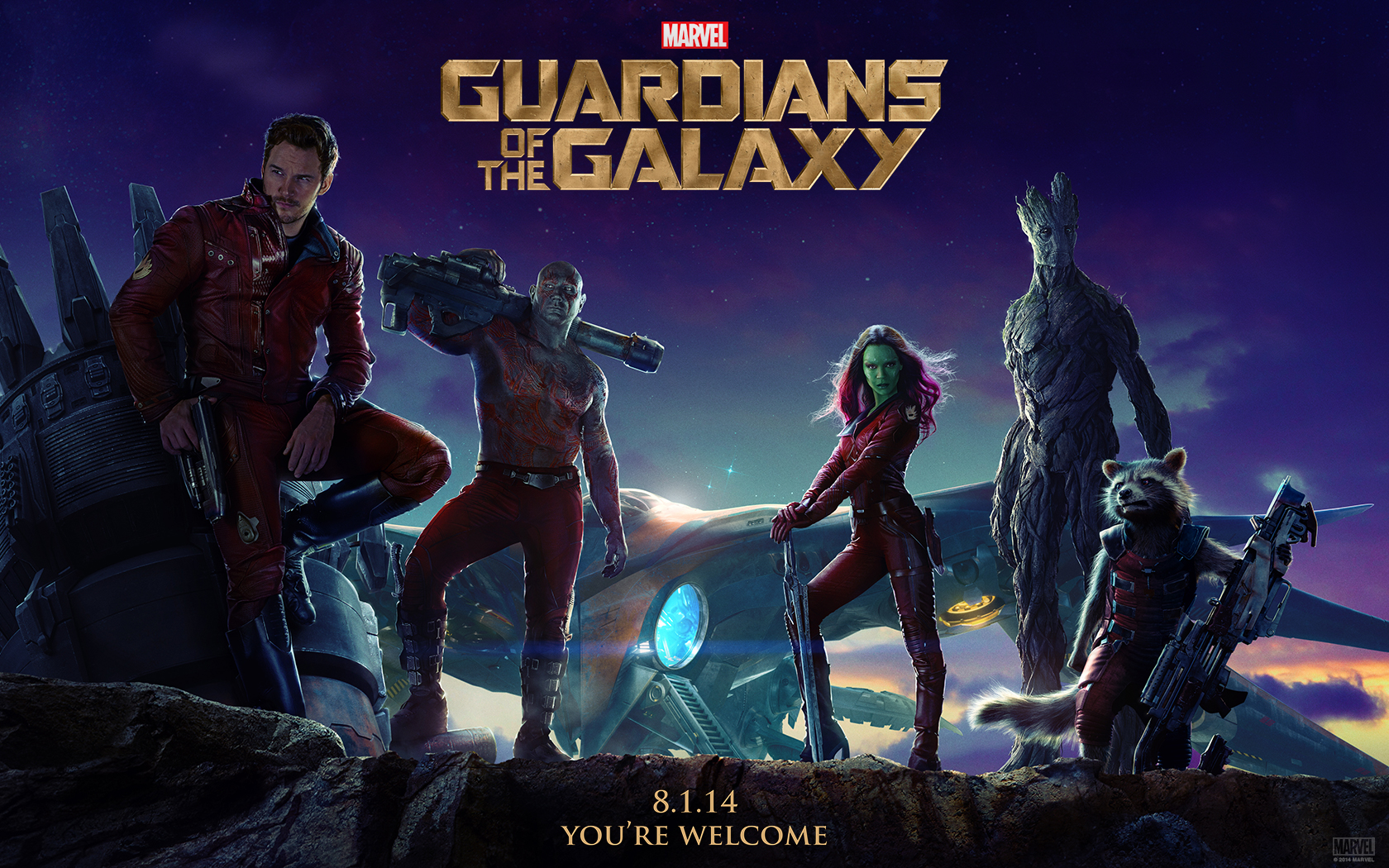 Our Megareview will comprise of reviews from all of the TMB staff. You can skip to the review from your favorite writer or enjoy all that we have to offer and read the whole thing. Welcome to the Mega Review for ‘The Guardians of the Galaxy:

Synopsis: An action-packed, epic space adventure, Marvel’s “Guardians of the Galaxy” expands the Marvel Cinematic Universe into the cosmos, where brash adventurer Peter Quill finds himself the object of an unrelenting bounty hunt after stealing a mysterious orb coveted by Ronan, a powerful villain with ambitions that threaten the entire universe. To evade the ever-persistent Ronan, Quill is forced into an uneasy truce with a quartet of disparate misfits–Rocket, a gun-toting raccoon; Groot, a tree-like humanoid; the deadly and enigmatic Gamora; and the revenge-driven Drax the Destroyer. But when Quill discovers the true power of the orb and the menace it poses to the cosmos, he must do his best to rally his ragtag rivals for a last, desperate stand–with the galaxy’s fate in the balance. I had a hard time deciding whether or not I really like guardians of the galaxy because it’s based on a comic book I know little-to-nothing about. Guardians of the Galaxy uses that mystery as one of its strengths and helps maintain the momentum Marvel has right now. Guardians of the Galaxy is actually a pretty fun way to expose oneself to the the cosmic/space adventure side of Marvel and witness their under-appreciated versatility as a studio. Guardians continues telling their over-arching story from prior films while also forging something new and unique among their roster of heroes.

I keep thinking about how awesome the music was in the movie. It’s been a very very long time since I sat in an audience that actually sang along with the music, let alone in a movie that wasn’t a musical. The movie attacks all of your nostalgic 80’s senses and compacts them into a little strip of film when entered into the proper device a great sensation of awesome overwhelms you forcing oneself to uncontrollably tap feet and nod heads. It wasn’t just that it was good music, it’s also that the movie found a clever way to make it a motif of our Star-Lord’s childhood and his little cassette player plays a part in explaining this guys priorities in life. Either way, most people between the ages of 25-40 will have little control over their feet and heads when watching this film. Enjoy it. If there were any detriments to the film it was that the acting was a little ho-hum from Zoe Saldana and Dave Bautista. Normally I’m a big, big Zoe Saldana fan but in this movie she just didn’t do it for me. I’ve seen her take on roles that aren’t a departure from Lady Gamora with full make up and everything in the past and I’ve seen her create and adopt personalities, body language, and more in order to really dive into some of her prior roles but I just did not see that with her Lady Gamora. I know she can do better which is why I’m just disappointed. I liked Dave Bautista in this movie to an extent. I don’t think it was very difficult role for a former wrestler turned actor to approach at all and I could see that the consistency in his portrayal of Drax the Destroyer. I don’t know if he really did any research into the character prior to taking on the role but I do think that he did a pretty good job on taking ownership of the role which made his character appreciable. It was easier to accept a lot of the humor based around his character because he was so consistent in being an alien that’s entire race is both stiff and literal. That plays out in interesting ways and often hilarious ways.

I was surprised by the humor in this movie! The humor littered throughout the movie was everywhere and defined this movie as an “action-comedy” in my mind. It was also the saving grace help overshadow some of the weaknesses of this film. The movie doesn’t really take the time to welcome any audience members who haven’t seen the prior 9 films as to who everyone is and why we should care which is a difficult to accept when you don’t know why you should hate a villain like Thanos. I mean I know he’s Thanos so he deserves to be hated relentlessly but what about the children who haven’t seen Avengers yet? And what’s a Kree? Why is Michael Rooker blue and seemingly has a man-crush on Chris Pratt’s Star-Lord? Where’d he get that sweet killer-pen? There’s a lot of things that went on without much explanation but somehow but I pretty much enjoyed it anyway.

I give Guardians of the Galaxy a 7 out of 10

View all posts by TmbStaff →