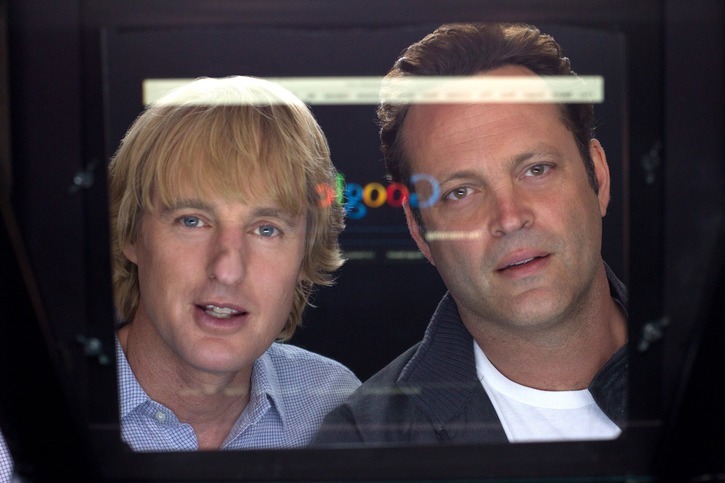 The Internship is a comedy directed by Shawn Levy who’s works include The Watch (2012), Real Steel (2011), and Date Night (2010) to name a few. The film is based on a story by Vince Vaughn and stars himself and Owen Wilson. It’s the first time the duo has starred together since 2005’s Wedding Crashers. The film follows two salesmen whose careers have been torpedoed by the digital age. After losing their jobs due to a company closure, they find their way into a coveted internship at Google, where they must compete with and against a group of young, tech-savvy geniuses for a shot of employment.

I’ll come out and say immediately, I actually enjoyed this film. This review will end up being more so a list of both positives and negatives about comedies in general, and realistically I think a lot of this film’s criticism has been based on subjectivity. In reality that’s an obvious statement, but I think there has been an inherent cynicism towards how comedies should be now and the general reception of this movie has been affected. And it’s something even The Internship blatantly pokes fun at, and simply says it’s okay to actually admit you like something when everyone else doesn’t.

It’s not to say this film isn’t without absurdity, like most comedies we generally accept the situation of events which unfold from which hilarity can ensue. I look back at last year’s 21 Jump Street and the situation of undercover cops infiltrating a high school applies. A trailer will sell us on the concept, the actors involved and whether we laugh. There is also the fear that we’ve already seen all the funny scenes and thus think, okay, I don’t need to see this movie and will also judge it’s potential predicable nature.

For some reason we’ve reached a point where it’s cooler to be snider and say it doesn’t look funny. The audience today is extremely judgmental and it’s true and as such what ends up working for comedies today to be a success is the genuine intelligence being dictated. We have to be outsmarted but also relate to what we see, so yes, we can get the joke. It helps that there is a charismatic group of actors on-screen. And comparatively now, it’s probably a safer bet that a movie like This Is The End (2013) where comedians play themselves will be wittier or just fresher in concept – versus what might seem like a film (The Internship) that is 8 years too late once again starring Vince Vaughn and Owen Wilson or even the upcoming Grown Ups 2 (2013). But therein lays the relevancy of a film and especially with that of The Internship. It’s no surprise that this film is formulaic, but I akin its presentation to old school meets new school and I think it works. It’s almost like both Vaughn and Wilson try to find relevancy as comedians in film given the movies they personally have been associated with over their careers. I mean movies like Zoolander (2001) and Old School (2003) are classics. It’s the same way with what and how we think of Adam Sandler and whether goodwill is enough to want to watch another Grown Ups film. And here it’s the same goodwill which might seemingly promote The Internship since the Wedding Crashers. You can’t exactly say “starring the actors from the Wedding Crashers” in 2013 and hope that fill seats, but you can allude to it with a byline like “Crashing the System” and hope the audience gets it.

It’s clear The Internship won’t find the same merit as its own relevancy works against it and that is a strange thing to say. But the timing of its release, the social commentary it has although sincere and worthwhile in today’s world, isn’t enough. And by definition of box office success, the film will probably be at best break even and that’s a reality of circumstances.

The whole concept of their characters entering into Google workplace for the first time is like when Tatum and Hill’s characters in 21 Jump Street come back to high school, thinking how familiar it will be, only to discover how foreign it is. There is a charismatic adaptation both Vaughn and Wilson show throughout the film, based on the general principle of what attracts – the simple concept of the person, or people. It’s a life lesson we all learn and there is a subtle humility to their roles in this film. They know they can’t be number one, but still have a penchant to want more and give it one more shot. It’s an honest attempt and in that same honesty, that’s what is mirrored throughout The Internship. But in that same sense, it’s like aiming to be average and for that I give it top marks, add in an appreciation towards sentimentality. I felt the film did a great job of mixing up the struggle of two friends who were clearly outdated finding a place in a new world. Conversely it did a great job of the youthful cast fighting for their own place in order to not be outdated themselves. Because that’s where we are today, ‘old school’ is a reverent term of nostalgia, today young adults aren’t offered the same reprieve so the bitter competition to become successful is a smaller window. Or maybe all that is a subjective statement as well. But that’s what The Internship presents, a myriad of ideas from both old and new and in some ways that’s who this film is aimed at. Just enough for the older audience to get and just enough for the younger audience to get, so they take turns laughing at the Flashdance (1983) references and the Harry Potter film (2001-2011) references. As a result it’s a collection of mild laughs, but on an odd chance you might have the audience member who covers both of those intangibles and displays the “Googliness” where they laugh at both. Admittedly that’s where I was and why I walked away liking this film.

We can be jaded and look at the film as one giant shill towards a company like Google. We can say this film might’ve been better served to be released in 2005 or 2006 when some of the references would’ve been fresher. But that’s also the point, as much as Vaughn and Wilson display their natural light-hearted comedic banter. This film for them is catching up to a genre which they used to dominate. It’s not quite there, but it’s good willed. It’s a strange thing to say “give this movie a chance!” and I’m not really saying that, it’s an objective view of where comedies are today and where they are going.

And with all that said, I give The Internship a soft