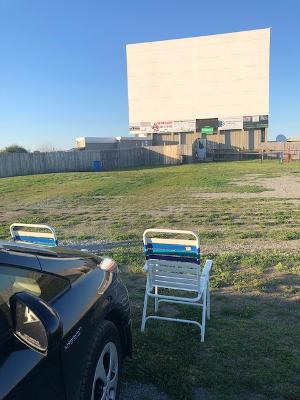 My birthday was Thursday. In an attempt to go to a movie somewhere other than my living room, I searched for any operating theaters in a two-state area near me (IA/IL). None of the indoor theaters were operating in this community of 350,000 people, but there were a few drive-ins open. One was in Delmar, Iowa. One was in Maquoketa, Iowa, and one was in Blue Grass, Iowa.

Since Blue Grass was the closest to us, we went to it on Friday night. I spoke with the Manager, who said it has been in operation since 2014. It is a 10-acre plot in a field near the small town of Blue Grass, Iowa, and the screen is a ‘cube.’ allowing them to show 3 different sets of double features.(They haven’t gotten the fourth side operational yet).

We selected “The Rental” on a bill with “The Big Ugly,” both of which were premiering that night (July 24) at the drive-in. I think “The Rental,” directed by Dave Franco, is also streaming on Hulu. “The Rental” featured Allison Brie (who is Mrs. Dave Franco IRL and appeared in GLOW) and 3 other young actors who had rented a lovely remote vacation spot that was, apparently, owned by a homicidal psychopath.

The lead couple were Ms. Brie as Michelle and Dan Stevens (“Downton Abbey”) as Charlie. Couple #2 were portrayed by Sheila Vand as Mina and Jeremy Allen White as Josh. You may recognize white as Lip Gallagher from “Shameless.” There is also a dog.

Nothing much happens in this film, other than cameras being placed strategically around the rental (the shower, the bedroom) to allow some pervert to spy on those within. The rationale for this leading to total annihilation is weak, but the ending (or non-ending) is even weaker, so don’t say you weren’t warned.

The film runs 88 minutes, with the story created  by Joe Swanberg, Mike Demski and Dave Franco, who directed. Christian Sprenger provided cinematography with lots and lots of fog and the music is courtesy of Danny Bensi and Saunder Jurricans.

“The Rental” is noteworthy because, for only the second time in the five months of parallel theatrical/Video on Demand releases, one film led grosses both in available theaters and on at least one home viewing chart. Dave Franco’s “The Rental” (IFC) grossed $404,000 in 250 theaters, two thirds of them drive-ins, to easily best several library titles made available this week. “The Karate Kid” (1984) was #2 with about half that gross from a larger number of theaters.

The horror thriller, starring Dan Stevens and Alison Brie, about two couples at a vacation rental facing unexpected terror, also placed #1 on Apple TV’s list of most viewed titles. With the film only released on Friday, July 24th,  this is likely only a sign of more success as other lists are updated. 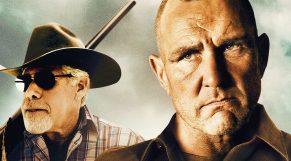 “The Big Ugly” was a chance for Malcolm McDowell (“A Clockwork Orange”) to square off against Ron Perlman (“Sons of Anarchy”). There were quite a few “old reliable” character actors rounding out the cast, including Bruce McGill, who was D-Day in “Animal House,”  and Nicholas Braun (“Succession”) as Will, plus a promising new-comer, Brandon Sklemar, who played Perlman’s no-good son, Junior.

Brandon Sklemar reminds of a young Robert Redford. He is totally convincing as the son without a heart of gold. His previous film that you might have seen was “How to Be Single.”

Most reviewers did not like “The Big Ugly.” I found the scenery around Moorhead, Kentucky (posing as West Virginia) beautiful and enjoyed the 106 minutes of this movie as much as “The Rental,” which really had no ‘ending.’ “The Big Ugly” does have an ending, but let’s just say it’s been seen and done before.

I took the opportunity to speak with the manager of the drive-in complex, which makes most of its money on  popcorn and pizza and requests that you not bring your own food. (Plus, no alcohol). The tickets were $10. The large pizza, 2 large (refillable) diet cokes, and a large popcorn were $36. The cost of the evening was $50. We took lawn chairs and watched Movie Number One sitting outside and  Movie Number Two inside the car. The film began at about 9 p.m.; the whole evening took until about 1 a.m.

The manager told us that the owner, when he retires in a few months, wants to make the fourth side of the cube in the middle of the 10 acres into a fourth functioning screen. Right now, they show 3 different double features. (“Grease” and “Footloose” were on one and “Iron Man” and some children’s film was on a third.) The owner has a perhaps pie-in-the-sky dream of building suites (on stilts) and running year-round, which sounds “iffy” in the midst of an Iowa winter, but this night the weather was perfect, with a slight breeze, extremely friendly employees (all masked), and radios that one could rent for $5 if you didn’t want to tune your car radio into a pre-set number. The only drawback was the soundtrack from nearby screens bleeding into our movies.

Tribeca, the film powerhouse, has recently made plans to open 160 new drive-ins around the country. The “big new” thing for touring musicians is having their filmed performance showing on a drive-in screen. One that is coming up in the future is Blake Shelton and Gwen Stefani, Garth Brooks, and Keith Urban have all used the drive-in system, instead of the normal in-person concerts during the pandemic. At the Blue Grass Drive-in, they have no say over the ticket prices of such shows and the manager wondered, openly, why the cost for Garth Brooks was $100 per carload, versus $115 for Blake Shelton. [He felt it would be better to have a standard price for these “concerts,” but he doesn’t make the rules.]