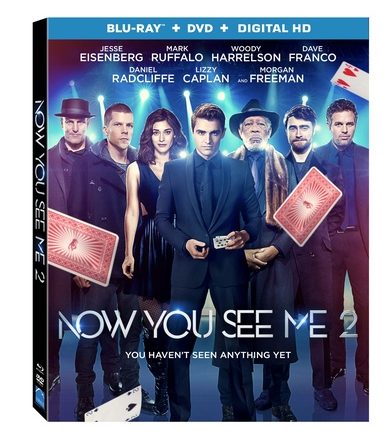 Now You See Me was a fun flick that boasted an impressive cast. I didn’t get a chance to see Now You See Me 2 when it came out in theaters. Lionsgate just announced that the movie will be coming to Digital HD on August 19, with a subsequent Blu-ray Combo Pack and DVD release on September 6.

It seems as if it was in theaters yesterday. Most of the cast is coming back, lead by Jesse Eisenberg, Dave Franco, Woody Harrelson, with Lizzy Caplan (YES!). That alone will get me to check it out. Here is the breakdown of the special features
BLU-RAY/ DIGITAL HD SPECIAL FEATURES*

Don’t ask my why it says “subject to change”. It probably won’t change.

Now You See Me 2 comes out on Blu-ray, DVD and 4K Ultra HD on September 6