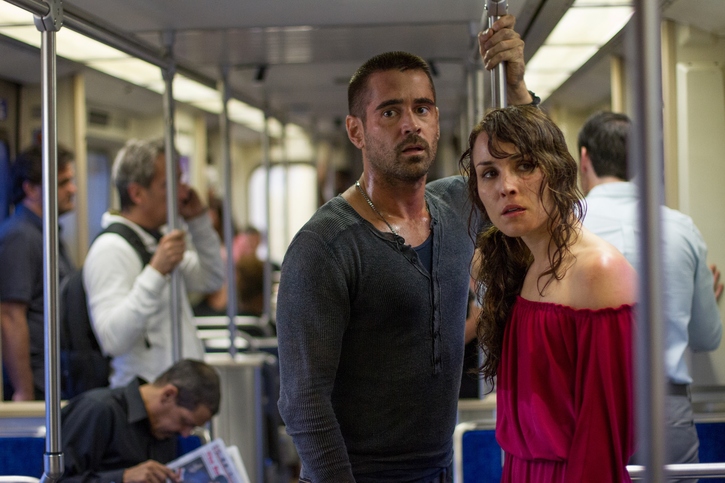 Niels Arden Oplev, the acclaimed director of the original The Girl with the Dragon Tattoo (2009), makes his American theatrical debut with the new action thriller, Dead Man Down. Colin Farrell and Noomi Rapace star as two strangers who are irresistibly drawn to one another by their mutual desire for revenge. The film co-stars Terrence Howard and Dominic Cooper, from a screenplay by J.H. Wyman (Fringe).

“Even the most damaged heart can still be mended.” That’s the allegory behind Dead Man Down, from start to finish. While you might not understand it in the offset, that simple line is spoken by Darcy (Dominic Cooper) to Victor (Colin Farrell) in the latest revenge film by Niels Arden Oplev.

Oplev is primarily known for directing the original Swedish version of The Girl with the Dragon Tattoo (2009). That film as well as Dead Man Down stars Noomi Rapace, who plays beautician – Beatrice, a victim of car accident which has left her both physically and emotionally scarred. The cast is rounded out by Terrence Howard, who plays seminal villain Alphonse Hoyt. However the reality of Dead Man Down is all the characters are villains and victims in their own right. And that in part lends to the entertainment value of the film. There are no good guys, its revenge interlocked with the characters portrayed by a messy road traveled.

The problem however with Dead Man Down is it plays to romanticized clichés. Or what we could probably deem a very ‘Hollywood’ approach. It’s odd how we can actually verbalize that word now and have implied a sense of generic meaning. The point in the film where we’ve seen it before, when the plot twist comes, and we know the ending.

This is what made Dead Man Down so odd, as Oplev makes an earnest attempt to offer a candid take on what happens when a damaged heart is mended. Because it’s important to contrast Victor and Beatrice’s personal lives to the fake ones they lead. The lives they once knew, the lives they now adopt to get through the days and self-discovery of what will make things right in their own eyes. It’s a love story.  One built out of obvious loss, tragedy and shadowed hope. But the film however loses these sincere feelings in a muddy pace and jarring perspective.

And somewhere along the way Oplev has to choose which is more important, fulfilling an exact plan of revenge carefully laid out. Or providing a contrite resolution where maybe the right decision is just to let it all go. Instead Dead Man Down is written to do both. And the way it marries it, is a clichéd final shootout where the guy has to save the girl, meanwhile setting things up where he still gets to kill everyone who has wronged him.

Whereas the film up to this point has presented the complete opposite, situations both controlled and highly manipulated. And again it’s odd because it’s here, Dead Man Down forgets its own core concept – revenge is never that easy.

And that’s part of the problem of the film overall, when the action kicks in, its break neck, when the introspective needs work, the film slows down incredibly. These two intangibles can’t coexist and it mirrors a care we have for either the story or the characters. We choose just like Oplev chooses. It’s an almost sad admission as Dead Man Down works fantastically with its cast but falls short with its story due to a lack of refinement.

It’s ultimately easy to reference and contrast this film with others as I’m reminded of The Departed (2006) or even this year’s Broken City (2013). But in some strange way I found that Dead Man Down did enough for me to simply remember the final image on screen – to say I liked the movie. While the film undeniably has its shortcomings, there is a characterized burden depicted that is almost beautiful. Or maybe just is and it’s the one cliché Dead Man Down doesn’t give us.

The Dark End Of The Street