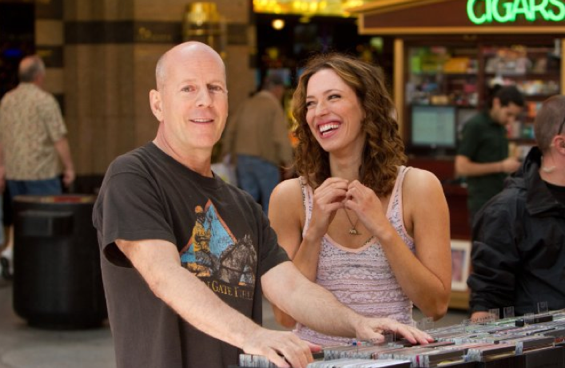 Bruce Willis, Joshua Jackson, Vince Vaughn, Catherine Zeta-Jones, and Rebecca Hall have all joined forces for this film “Lay the Favorite” marking Bruce Willis’s 500th film for this year. Seriously, Willis has appeared in just about every production this year that would allow him to show up, which isn’t exactly a bad thing. This film tells the tale of a stripper looking to start over her life as a bookie in Las Vegas while getting mentor’d by Willis’ Dink. Seriously, check it out:

It actually looks like a fun cute film. There’s some areas that have me a little apprehensive, mostly the small budget and seemingly generic story, but there’s some charm to be found in there and with all those involved and good writing then there’s still plenty of opportunity for entertainment. I also like the idea of Joshua Jackson getting another chance in feature films. In my mind he was Jake Gyllenhaal before Jake Gylenhaal and still has the talent to be a leading man.

Clearly this movie focuses on Rebecca Hall’s character and from what I can see here she’s delivering a fairly easy performance. Depending on the reliance on the comedy and her timing her performance will either stand out or just be serviceable. That’s abotu the difference between a Kristen Wiig performance or a Sarah Jessica Parker performance. We’ll see….