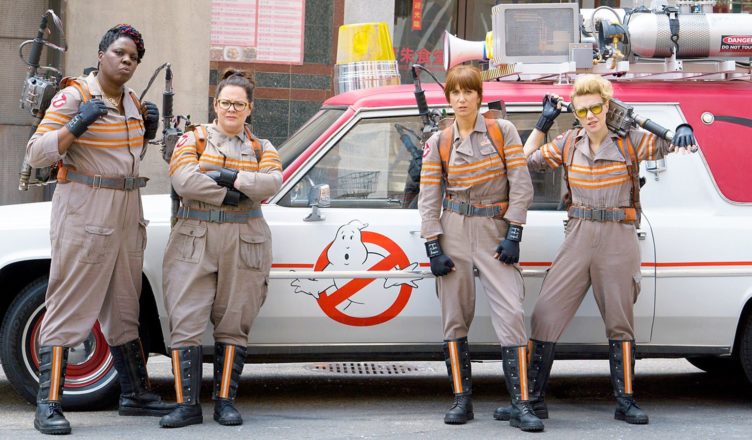 Synopsis: A team of paranormal investigators joint up together to stop a vicious ghost that’s been awakened.

One of the more anticipated movies of the summer has arrived and it disappoints. Paul Feig’s “Ghostbusters” reboot is everything I was hoping it wouldn’t be. It’s a whole lot of junk and visual exhaustion that doesn’t deliver any sort of legitimate plot. So what’s the reboot story all about?

Erin Gilbert (Kristen Wiig) and Abby Yates (Melissa McCarthy) are two longtime paranormal investigator friends who are on the outs. A Manhattan ghost invasion brights the them back together to investigate the paranormal activity taking place. The rest is history, or in this case it’s garbage.

I appreciate the fact that Feig stayed true to the concept of the original and retained some key elements that deliver on the nostalgia. The Ghostbuster car is as close to resembling the original as you can have in 2016. Even though it’s a painted hearse with a Ghostbusters logo. They didn’t mess with the logo itself, which is a good thing. The gadgets are modern, but have an old school feel and look to them. Same goes for the Ghostbuster outfits, even though they are quite baggy and look like scrubs.

As much as I didn’t enjoy this movie, there were some things to like about it. First and foremost Chris Hemsworth knocks it out-of-the-park. He’s easily the best thing about this movie. Hemsworth plays a receptionist named Kevin. What’s great about this character is that Hemsworth plays Kevin so obliviously. He’s the straight faced dork that doesn’t realize what a goof he is. Hemsworth seems to be carving out himself a new persona in movies. Playing the handsome self-obsessed comedic relief. It’s a nice diversion from the leading man role. He’s great at deadpan. For one a female character doesn’t play the beautiful sex “object”. A role reversal is an interesting take to say the least. What makes Hemsworth’s Kevin so great is also the major detriment of the movie. Kevin is easily the most polished character that’s given the most attention and personality. That doesn’t bode well for the four female leads.

Simply put, there was no effort to make this plot plausible and entertaining. It’s just a bunch of crap thrown your way. Loud. Obnoxious. Mindless. Ghostbusters is an example of a movie that is very aware that it’s a summer blockbuster and it tries very hard to be that. The dialogue is brutal. There is only so many times you can deal with hearing, “Let’s light them up”. Or when Wiig gets slimed and says something like, “That stuff went everywhere, by the way. In every crack. Very hard to wash off.” Yeah, not as hard as it is to wash out that dialogue from my mind. It’s just one bad pun/gag/joke after another. Boob jokes, fart jokes, anything gross and amateur you can think of is in this movie. The classic movie references are incredibly forced. It’s like they tried referencing every pop culture movie and event possible and have their actions reflect that.

I had no issues with casting four female leads to replace the men. Actually, it was a nice way to separate it from the original and let this version have its own identity. The problem is the casting of those individuals. The usually super funny Wiig plays the “straight man” role (no pun intended), and she doesn’t deliver. Her talents are put to waste in the role of Gilbert. The usually very funny Melissa McCarthy phones it is. She looks bored on-screen. Another actor whose talents go to waste was Leslie Jones. Who has quite the comedic timing usually. In this film the dialogue she’s given consists of her yelling and screaming at all time. Kate McKinnon was dreadful. It’s as weird and oddball of a character as you’ll see. Just bizarre in every aspect. Corny bad puns. Dumbfounded facial expressions. I’ve seen McKinnon do some fine work on SNL, playing weird characters that had a persona, her character Jillian Holtzmann lacks one.

Now, the part everyone has been waiting for–the cameos from the originals. Bill Murray, Dan Aykroyd and Ernie Hudson make their Ghostbusters cameos, and they couldn’t be more meaningless and disappointing. They forcefully pop in the movie at random times. The characters they play have little to no purpose and don’t move the plot a bit. Also, if they wanna be honest to the original why misuse Slimer and toss him away like a prop. Ugh.

“Ghostbusters” attempts to be a bold fun blockbuster reboot, but it isn’t. The final battle looks like a fireworks show. So many explosions and destruction I couldn’t seem to tell what was going on. The misuse of the lead female actors was a travesty. You’re brining in four qualified comedians and given them dialogue vial. A script that doesn’t seem to know where it’s going, but makes sure to stop every minute to throw out a bad gag. Paul Feig, you’ve officially been Ghost-busted. Who am I gonna call? Not these Ghostbusters.