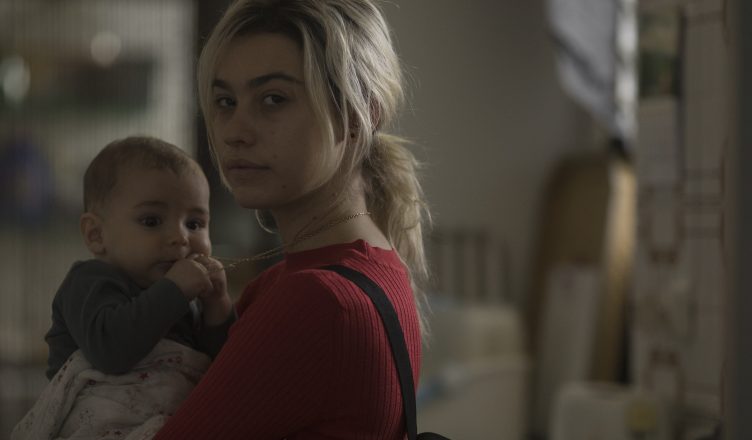 Living in public housing with her infant son, Joel, in tow, Sara hustles to string together enough part-time work in menial jobs to move out. The 22-year-old is determined to make a better life for herself and her child and to rescue her kid brother, Martin, who is crippled and living in a social services group home.

Sara’s love interest, Dani (Alex Monner) is supportive of young Joel, but is unwilling to commit. Sara also has a hearing loss and wears a hearing aid. Just as things are starting to look up and a new job in a food service firm that makes 800 meals a day offers her a permanent contract, her ex-convict father Manuel turns up.

A First Communion party for Martin is a turning point in the film. Young Martin locks himself in the bathroom, asking his older sister to call their father to come to the party. Although Sara had made up her mind to challenge Manuel in court for custody of Martin and resists Martin’s suggestion, she finally relents in the face of the young boy’s desire to see his father. That lets trouble back into Sara’s life.

The ending, with Sara  in court, after all the troubles she has endured, reminded me, in tone and intensity, of the gut-wrenching scenes in “Monster’s Ball” that ultimately won Halle Berry an Oscar. Beautifully acted by Greta Fernandez (Greta was recognized as Best Actress by the San Sebastian Film Festival) the part of her father, Manuel, is well-played by Greta’s actual real-life father, Eduard Fernandez, who is a big star in Spain. (33 wins; 38 nominations).

In the Q&A following this Spanish-language film, Greta shared with us that not only was her father playing her father, but the young man playing her love interest Dani , Alex Monner, is her best friend. Director Belan Fumes worked on the script for the film (with Marcel Cebrian) for two years. Shooting, as is customary in Spanish language productions, took about 2 weeks. She shared with us that her work on a Netflix film, by contrast, was over 4 weeks. Neus Olle handled the cinematography well, for the most part (especially in the final scene), but it is Greta Fernandez who shines through in her part as the strong yet sensitive young woman who has been kept down and alone by society for far too long and is struggling mightily to rise up.