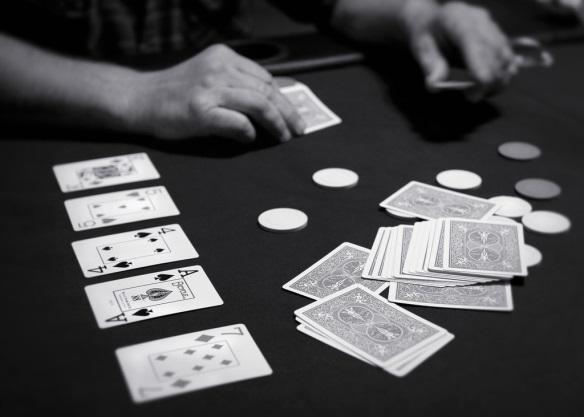 Is it a safe bet making a movie about poker? Image from Wikipedia

When it comes to movies, everything is a high stake gamble. One false camera angle, a misleading plot twist or a lack of character development can result in a film crumbling to pieces on the big screen. As Eric ‘The Kid’ Stoner helped prove in The Cincinnati Kid the key to a successful film is suspense and enticement, which holds the audience’s interest. This is why poker films are often so successful on the big screen. Whether it be Texas Hold’em, or another variation. You can practice if you  take advantage of the sign up bonus at caesars today and be well on your way to mimicking your favorite films!

As we saw with the famous 007 in Casino Royale, nothing is more nerve-racking than watching our protagonist play out some extremely high value poker hands, with the knowledge that the fate of the world swings back and forth as each card is dealt. That anticipation doesn’t come out of nothing however, as it is crucial that the viewer isn’t given too much to process before the film reaches the important rounds of the game. Eliminations of lesser players, or minor less significant hands, will likely be played out for the viewers to enjoy and to enable them to get a feel for the game, but too much focus on a singular poker game and they will lose interest. This is exactly why one of the key requirements of a great poker movie is to keep the focus on the crucial, game changing hands.

Let’s be honest, if you’d have had to watch 007 and Le Chiffre eliminate all the other competitors at the table when they squared off at the Casino Royale in Montenegro, then it would have been less action-packed and there would have been less time for the gun-shooting, suit-wearing antics of a usual James Bond classic. This is related to the next important point, sustaining a key sub-plot. When a film is just about the cards without protagonists to root for and antagonists to jeer at it can become dull fast.

Just as Kevin Spacey showed us when he portrayed a money-driven mentor to several leading MIT students in 21, having someone at the table who the audience wants defeated, for reasons that go beyond the usual, ‘I just don’t like him’, can prove especially successful. In 21 there is a clear sub-plot of Ben Campbell, the protagonist, engaging in card-counting for what he sees to be the ‘greater good’ in a bid to earn funds to fund his education at Harvard Medical School, before that quickly changes to Campbell wanting revenge on Spacey for kicking him off the team.

A final component of a great poker film and a tie-in to the work seen in 21 is making poker less of the selling-point of the film, but something that is a key component nonetheless. In Ocean’s Eleven a heist is performed on several casinos, and whilst the plot revolves around a George Clooney led team of bank-robbers instead of action at the tables, it still manages to show the glitz and glamour of the ever-so-popular casino lifestyle.

So in summary it seems the best way to make memorable poker films is to focus on the juicier hands, develop sub-plots and to take the focus away from the tables, at least for a little while during the film. Although in reality the only way to replicate a real poker game is for every single person in the audience to feel the suspense and drama and that simply cannot be taught.