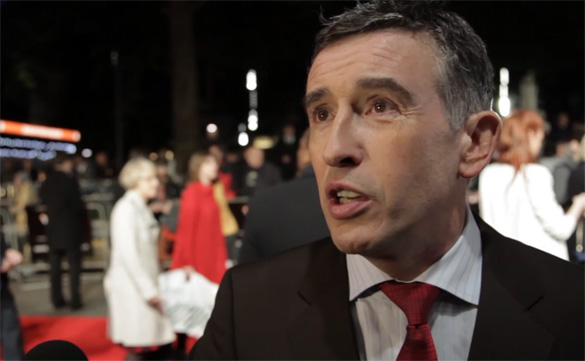 “Philomena” is based on a true story about an Irish woman – played by Dame Judi Dench in an Oscar-worthy performance – who is on a quest to find the son who nuns stole from her some 50 years before when as an unwed pregnant teenager her family sent her away to a convent to give birth. She goes on an odd-couple journey with Martin Sixsmith (Steve Coogan), a BBC journalist and recently axed British government adviser, a cynic and lapsed Catholic, who sees the opportunity to write a magazine story, which in real life became the book, “The Lost Child of Philomena Lee.” The Weinstein movie, which debuts November 22, is directed by Stephen Frears (“Dirty Pretty Things,” “The Queen”) and produced and co-written by Coogan and Jeff Pope. Coogan also stars as Sixsmith and portrays him as a man who is often rude, impatient, pretentious and cynical. But because he’s played by Coogan his character is also sharp and funny, which is a boon and even a necessity in a story with such sadness. The movie is funnier than you might imagine even as it raises issues about forgiveness and faith.

At a press junket recently for “Philomena” at the Crosby Street Hotel, Coogan stressed that the took some liberties with the book but that both Philomena Lee, who audiences will sympathize with as a kindly and wise old Irish woman, and Martin Sixsmith, who is actually Protestant and not at all like the pretentious, cranky guy in the film, were fine with the way their characters were transformed for the screen.

In fact, Philomena Lee was at a Bafta screening the day before and spoke of how much she liked the film and how she couldn’t get over that Dame Judi Dench, “M” from the James Bond films she loved, portrayed her on the big screen.

Below are highlights from a roundtable with the “Alan Partridge” actor Steve Coogan, who is as brainy and witty as the characters he often portrays on film.

Q: When you see “Philomena” you can’t help thinking about the Michael Winterbottom’s “The Trip” in which you co-star with Rob Brydon. “Philomena” which you co-wrote, doesn’t have a similar subject matter, but it is about an ill-fitting couple trying to get along on car trip. In terms of writing, how were they similar?

Steve Coogan: If that parallel is there, it’s subliminal because it couldn’t be more different in its execution. “Philomena” was written word for word and we stuck to the script verbatim. There was no improvisation whatsoever. In “The Trip,” it’s almost entirely improvisation so they are poles apart in terms of their execution. Of course, they’re both road movies in a way so there is that similarity. But again, I never saw that parallel until it was pointed out to me. I was just interested in telling Philomena’s story, which I had read in the newspaper and which I found really moving and I just wanted to tell an authentic real story. As a drama, I didn’t see it as being especially funny at first but then I thought I could maybe use humor to make it bearable for an audience because I thought it was so inherently sad. Whenever I tell people the story in a sentence, they say, “Oh that sounds awful. Who would want to go see that?” I didn’t want people to leave the cinema depressed, I wanted them to feel somehow hopeful or positive or inspired by Philomena.

The script was built, and only small parts of it based, on Martin’s book. Most of it was based on interviews I did with Martin and Philomena. His book deals almost exclusively with the life of the missing son and he’s hardly in this at all. He’s a subliminal thought throughout this film. You see portions of his life through Super 8 (at the end of the film).

Then, I remember that I had seen this film called “Missing” years ago, and I remember thinking that’s about a journey that two people go on and they learn things about each other and about life and it’s this little odyssey. And so I thought it could work but I wanted to have more humor in it even though it’s a drama. It was actually funnier than I thought it would be. I wanted to use a little humor but it ended up with more but I’m delighted about that. When we were writing it we were really careful not to introduce humor all the time and let those moments have real pathos and the humor is never contrived, it always emanates naturally out of a situation.

How much input did you have in the statement about human interest?

Philomena is much closer to the real Philomena. But I did most of the dialogue and character stuff and Jeff, my co-writer, helped with the structure and the pace and the rhythm. But there’s some overlap but that was largely what we did. But the dialogue is mostly me. When Martin said that human-interest stories are read by weak-minded, ignorant people written by weak-minded, ignorant people, that’s me at my most cynical. The thing is that you could accuse the entire film of being exactly that film so I’m as guilty as anyone else. Philomena is a human-interest story by definition.

Talk about some of the humor than comes from the personality and comments Philomena makes but in which you someone managed not to make fun of her.
That all came from truth. The humor that’s in there is never contrived, it’s humor that comes from the truthfulness of the situation. If the humor’s there, we said, let’s mine that humor and then we’d talk about whether it was too much and to take it down a little. It’s all about tone. Sometimes we’d take humor out of the scene because we felt like it would trivialize it. We were careful.
Martin has a lot of anger towards what happened to Philomena and my guess is that the average viewer would side with you. Do you not want that?
I don’t mind. I spoke to Philomena and said do you forgive what they did to you and she said, “Yes, I do.” And I thought that was very interesting and could be a very powerful moment in the film in the sequence of events. She said that to me and made that decision. She didn’t say it directly to the nun, but in the creative licenses of the film, it works. But she said that and right away, her daughter, who is also in the movie, said, “I don’t. I don’t forgive them” straight off the bat. And they all seemed very comfortable. Philomena was like, “Well she doesn’t but I do.” I wanted to put those both in the film next to each other but I also wanted to show that to have that moment of catharsis, I wanted Martin to confront them and tell them what the audience would want him to say. He needs to give the pound of flesh to say that out loud. The audience would crave that and would feel cheated if they didn’t have that moment, just to say it out like it is. Conversely, I wanted to contrast him anger with her serenity. She says that thing about how she doesn’t want to spend the rest of her life hating people and (she says to Martin) “I don’t want to be like you” and he’s suddenly humbled and reduced to almost a child in front of her. That was really important too. I didn’t want to be prescriptive. There’s nothing worse than a film saying, “This is what you ought to be.”
Have you gotten any response from the convent or Catholic Church about your film?

The church has not been forthcoming in Ireland, where it happened. People within the church have been very contrite, but there’s just as many people who are unwilling to accept the facts of the film.

We asked the church if they had any comments about the film and told them we were making the film and asked them if there was anything they wanted to say but they didn’t engage or respond to us in any way. They didn’t want to help. We went and looked around the abbey and I had a conversation with a nun while we were looking around the abbey and the word she used was “impertinent.” I pointed out to her that we asked if they would help in a phone call the day before and they had made it quite clear that they didn’t want to have anything to do with the film. Can you talk about your collaboration working with Stephen Frears.

Stephen was there to totally lift up what I had and didn’t tear it apart. He was there to serve the script and helped us get it into a more clear, cogent state and helped elevate it by making it look beautiful. There’s just a lot of people talking and it could have been dull but it’s not. That’s a result of Stephen’s great work.

(As for Dame Judi Dench) I went to the house and told her the story and she was enamored with it. She totally wanted to do this and had worked with Stephen before (“Mrs. Henderson Presents” in 2005) so I knew that she would feel comfortable and I wanted her to because it’s a big task. She’s in her late 70’s and playing a lead role is quite challenging.

I remember a few years ago she was having eye problems and couldn’t read the script.

I went to her house when the script was finished and read the entire script to her out loud because of her eye problems. When the script was printed out for her, it was printed in very big letters. Almost like for a child because her eyesight is so bad. She got through it. I was intimidated because I was going to be acting opposite her but she made me feel very comfortable. I saw her struggling with the part just like any other actor. She’s great but she’s flesh and blood.