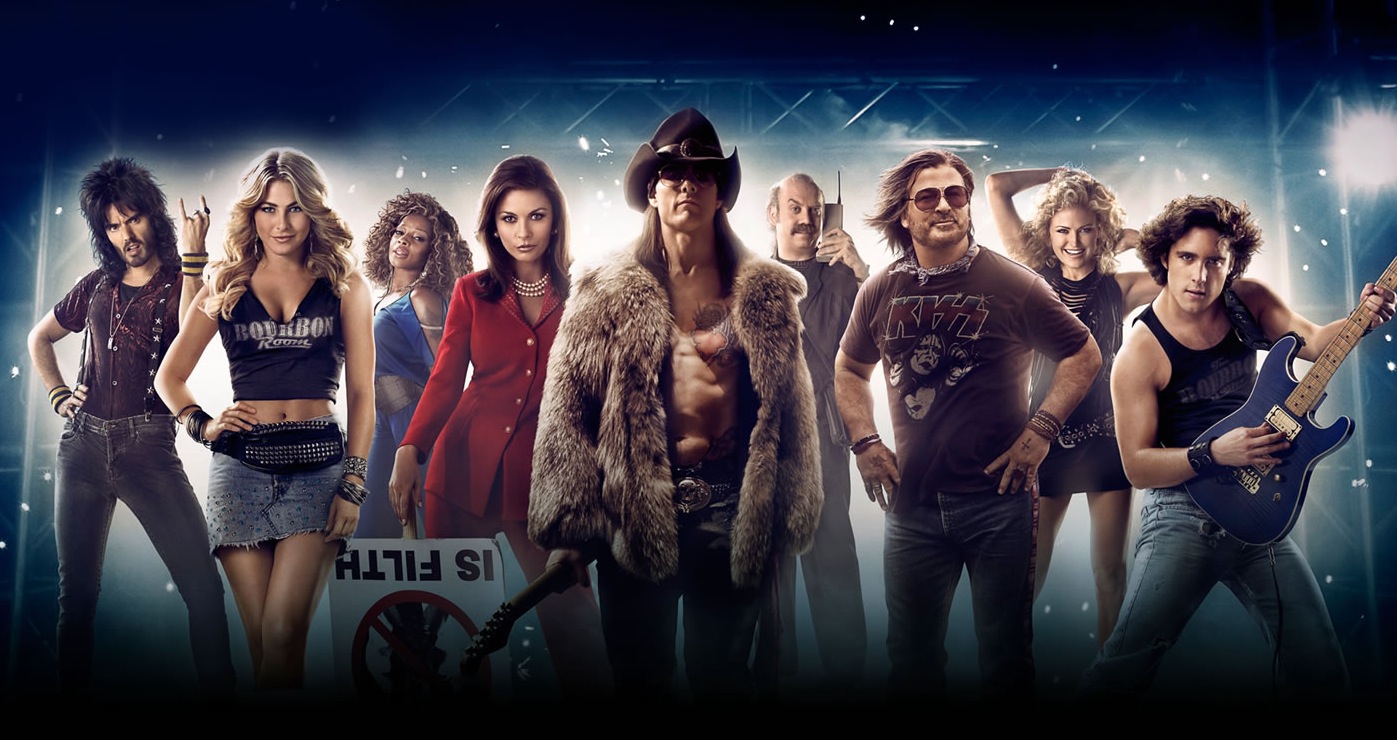 Synopsis: “Rock of Ages” tells the story of  Tulsa, Oklahoma girl Sherrie, (Julianne Hough), and city boy Drew, (Diego Boneta), who meet on the Sunset Strip while pursuing their Hollywood dreams. They encounter numerous characters including owner Dennis Dupree, (Alec Baldwin,) and his protégé Lonnie, (Russell Brand), the mayor’s wife Patricia Whitmore, (Catherine Zeta-Jones), vowing to shut the club down as well as a “passed his prime” rock star Stacee Jaxx along with his agent Paul .

Confession: One of my least favorite film genres is the musical. There are few I can tolerate. Besides the exceptional classics like “Wizard of Oz” and “The Sound of Music,” I enjoyed the sweetness of Woody Allen’s all-star throw back to 1920’s music in “Everyone Says I Love You” and the Irish rocker love story “Once.” Also, I’m slated to attend “The Book of Mormon” when it makes its off Broadway debut in Denver in August. My knowledge and appreciation of the genre is very, very limited.

Shallow and unbearable, “Rock of Ages” plays like a long form 1980’s glam rock episode of “Glee” without the high school drama, political correctness, or Jane Lynch’s crassness. And like the show it is just as immature, lame, and overstays its welcome featuring five songs too many. ‘Ages’ is the “Gigli” of musicals, which makes “Nine” look like “Chicago.” It might have the potential to be a midnight cult classic for all the wrong reasons including the fact that Julianne Hough sings like a ‘Chippette’ from “Alvin and the Chimpmunks” doing an impression of Britney Spears. The musical high-point of the ‘Ages’ features a cultural climax between Russell Brand and Catherine Zeta-Jones but felt forced and was too short. This was the only musical number I was looking forward to watch being a medley of two of my favorite 80’s songs but it was poorly executed and lasted less then two minutes! The most tolerable characteristic of ‘Rock of Ages’ was Tom Cruise as Stacee Jaxx. It’s clear and obvious that Tom Crusie had a lot of fun with the roll, however, the lingering issues and problems of the subplots of the film stuck around like clingy groupies. The side stories involved the sexually repressed Rolling Stone reporter (Malin Ackerman) was grueling especially in their sexually charged number. Jaxx’s skeezy agent played by Paul Giamatti was light years away from the under-appreciated, sweet and exceptionally well done ‘Win, Win.’

I get the feeling that this film isn’t really targeted at me, but rather women 10 to 20 years older than me. For them, this movie is critic proof. The weakest element of “Rock of Ages” is a lack of narrative focus. One scene comes to mind when Drew and Sherrie are near the Hollywood sign when he declares that he wrote a song about her. Drew proceeds to sing the first few lyrics of Journey’s “Don’t Stop Believing” and I was confused. Is this the story of Steve Perry? I realized I was applying too much thought to “Rock of Ages” while giving the film too much credit. Naturally, I cringed and rolled my eyes and for me my hatred for the ‘musical’ never rebound.

Not all is a complete loss: I enjoyed Mary J Blige’s presence as Justice providing her ‘soul’ and sound while taking Sherrie under her wing. The choreography of the strippers slithering down the poll in the Venus Club was eye catching. These moments made the film feel like the flashy musical it desperately wanted to be but many of the numbers are poorly edited. I had one major issue with their interactions when Justice tells Sherrie “That stage is a pedestal and when you’re up there, you’re untouchable,” and “You want to get respect, you got to take that stage” as its not in reference to musical stage, but rather Sherrie’s new job at the strip club. Maybe Blige’s advice was meant for a metaphor of self-discovery for Sherrie to sing, however, I just saw it as a dishonest form of advertising. Finally, the duet of “Cant Fight This Feeling” was the surprisingly entertaining shock of the film! I won’t spoil one of the only memorable moments of “Rock of Ages.”

There’s no way to compromise the facts: “Rock of Ages” is a terrible movie. The viewer has a choice: Either you hate it or you enjoy it as the guilty pleasure as the flamboyant hot mess of a musical. What the heck is this great cast doing in this glorious train wreck of a film? Any critic who gives “Rock of Ages” a positive review should be required to take a soul-searching sabbatical back to film school.

3 thoughts on “Review: Rock of Ages”