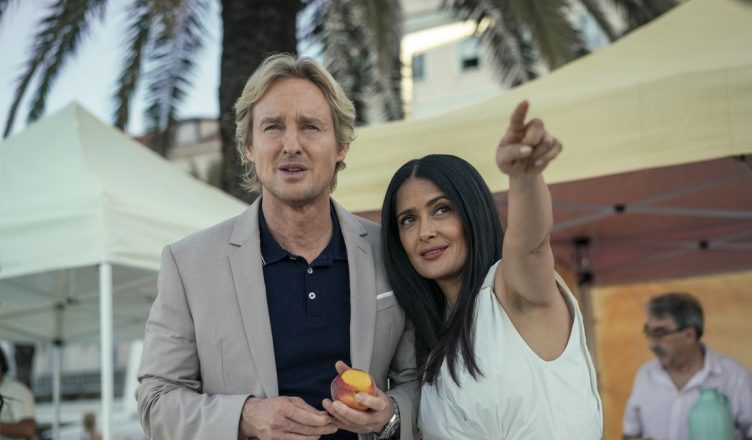 An unfulfilled man and a mysterious woman believe they are living in a simulated reality, but when their newfound “Bliss” world begins to bleed into the “ugly” world, they must decide what’s real and where they truly belong.

One interpretation of the new sci-fi drama “Bliss”, which is to say, mine, is this: You can run away to all the artificial euphoria you can handle. But you can not hide.

Owen Wilson’s troubled character of Greg Wittle learns this in most painful fashion.   Wittle is a divorced father of two adult and estranged kids who, freshly fired from his miserable job with the wretched “Technical Difficulties”, repairs to a bar to swallow his sorrows. There he meets a super strange and homeless Isabel Clemens, played by Salma Hayek. The two set off on a bizarro, and often times baffling, journey between two different planes of existence. One, the real world of Greg’s less than ideal life jam-packed full of problems; the other, a utopian place of perfection that proves too good to be true. Or to last.

It is good to see Wilson back in a lead role. A gifted and natural actor, he is up to the task of anchoring this unconventional, though uneven, effort.   Hayek is okay here, but I never fully bought into her portrayal of a vagabond vamp cum ground-breaking scientist.   For me, Nesta Cooper as Greg’s never say die daughter, Emily, is a beacon of light shining through an otherwise dark and murky tale. Relentless in her pursuit to reunite with and rescue her dad, Cooper’s critical role infuses “Bliss” with much-needed, and much-welcomed, spirit and energy.   And in the end, her earnest performance goes a long way toward reinforcing this film’s resonant message:

Happiness is never truly appreciated without those times when we all must, with a little love or a lot, find our way back to it.

You can run away to all the artificial euphoria you can handle. But you can not hide.