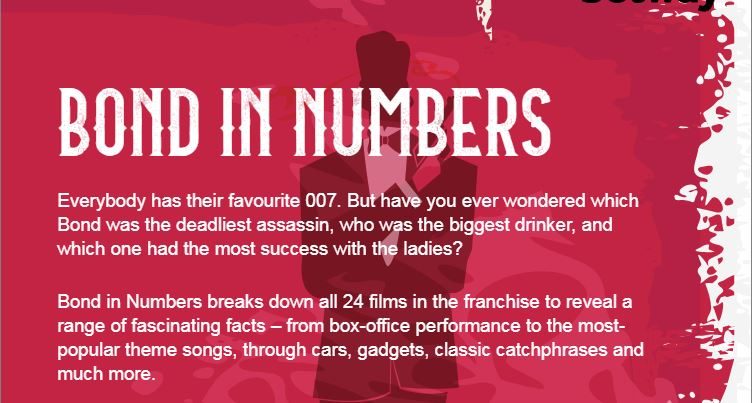 Even a true James Bond fanatic would be pushed to tell you which 007 used the most firearms, who was the biggest hit with the ladies or who relied most heavily on Q’s gadgets and gizmos. Bond in Numbers gathers all of this data from every film, looking at every imaginable Bond-related statistic.

The extensive guide from online Betway compares the profit made from each film, both at the box office and after inflation, and how the theme song from each film performed in the UK charts. It also includes trivia, fun facts and never-before-seen data from Spectre. bonus bez depozytu.

Diamonds are Forever and Quantum of Solace share the spoils when it comes to wrecking expensive cars, 4 each in total.

You may know that 007’s drink of choice is a vodka martini, but did you know that he only says his iconic catchphrase “shaken, not stirred” 12 times throughout the franchise? However, “Bond, James Bond” gets 25 outings across the 24 films.

Bond in Numbers allows users to break down the statistics by individual film and also compiles the best of Bond to see the stand-out facts at a glance. Fascinating facts from the franchise are also included, including the origin of the Walther PPK, how to make a proper vodka martini, and Sean Connery’s brush with death on the set of Thunderball.