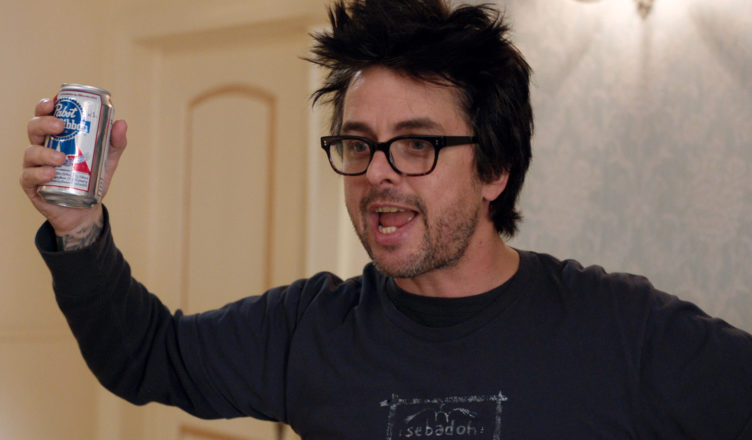 I really wanted to like “Ordinary World”. The comedy stars Green Day front-man Billie Joe Armstrong as Perry, a just turned middle-aged singer/guitarist on indefinite hiatus from his once-promising rock group. This cat is a fish flung far out of water as domesticated husband, father and feckless hardware store sales guy. When presented with the opportunity to celebrate his 40th birthday in grand style he does it up right in a posh New York City hotel suite, together with his ex band-mates and a pack of party animals he’s heretofore never met. Natch, shenanigan’s soon ensue.

While the hard driving original music Armstrong contributes is fantastic, particularly the amped-up onslaught that mule kick starts the story, the superlatives for this largely lukewarm effort pretty much start and end there.

Writer/Director Lee Kirk thrusts it completely upon Armstrong to carry his movie, as the brilliant musician performs in practically every single one of it’s scenes. Now granted, Armstrong’s Perry is of decidedly docile demeanor, having ostensibly fallen into the mostly uneventful life he now leads. However, he proves to be just a little too passive in this role. To the point where Armstrong’s underplaying of his understated character never managed to amplify and fully engage me. In all candor, the same can be said of the turns turned in by the flick’s supporting stable of actors, which includes a trio of highly capable pros in Selma Blair, Chris Messina and Fred Armisen.

Still, despite the earnestly honorable intentions, and in keeping with the film’s title, all involved here wind up coming off as not much more than…yep…you guessed it.