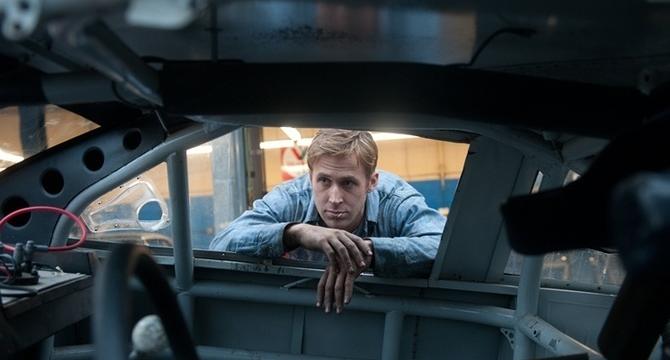 “If I Drive for you, you give me a time and a place. I give you a five-minute window, anything happens in that five minutes and I’m yours no matter what. I don’t sit in while you’re running it down; I don’t carry a gun… I Drive.” – Driver, Ryan Gosling

A Hollywood stunt performer who moonlights as a wheelman discovers that a contract has been put on him after a heist gone wrong. The movie stars Ryan Gosling as the principal character and the supporting cast is rounded out by Carey Mulligan, Bryan Cranston, Albert Brooks, Oscar Isaac, Christina Hendricks and Ron Perlman. Drive is pegged as an action-drama/heist film directed by Nicolas Winding Refn and adapted from the 2005 novel of the same name, by James Sallis.

Review: I knew of Drive based only from its mainstream theatrical poster and it was enough for me to want to possibly see Gosling in something different. I’ve given various films a chance on far less and it typically becomes one of those moments where you’re beside a theatre, the showtime is nearing and you simply say “why not.” I really had no idea what to expect, outside of being a slight car enthusiast I figured that also fit the bill on reasons of interest. Admittedly also, I had no prior knowledge of this film having been viewed at various festivals, nor was I aware of the praise and acclaim it had garnered from those viewings.

Marketing is an interesting thing.

Attach the tagline “From the Producer of ‘Wanted’” to the poster with the title of the film over a greasy engine it leaves you thinking one thing. Seeing a poster of Gosling looking out a window overlooking a city at night illuminated by neon lights with a 2011 Cannes Film Festival logo could possibly get me thinking something else. We watch movies because we love to. There are no real pre-requisites to how much you know about a film beforehand, outside of it perhaps being a sequel to understand plot. If you saw all the awesome trailers or have been a big fan of said actor, director, or the genre itself. When you sit down in a theatre, all those lines blur and you just become a part of the audience. When those credits role, the question asked is simple and the same for everyone.

With summer being over and the ‘blockbusters’ that came and went, I found Drive to sincerely be a breath of fresh air. It’s surprisingly intelligent in how referentially inspired the movie is, whether purposeful or by your own comparisons. Drive is essentially a modernized 80’s film of the action-drama genre.

You won’t find the action of films like Cobra (1986), Big Trouble in Little China (1986) and Tango & Cash (1989) but you’ll definitely see glorified violence in a visceral regard. Drive takes on an eerie resemblance, taking the ‘fantasy’ of the old 80’s action genre while adopting a sense of film noir, making the movie itself more realistic in nature than we are accustomed to. It’s almost cynical, but not quite because Drive is allowed the usage of modern filmmaking. The modern sensibilities come with the updated set design where everything is clean or just dirty enough and the locations are specific. The filming is exact, the direction is dramatic and the action is in your face. An inspired and/or original style exists throughout the movie, where even the costume design carries its own weight.

In a clear sense, there is an obvious precision in the film, from the opening hot pink ‘Risky Business (1983)’-esque typeface used and to that of the soft lighting in the Driver’s apartment to the contrast of a normal sunny day while driving along the LA river. The hard camera angle behind the Driver and the rearview mirror blocking our view of the road he drives, but not his own view of the road. We have no control over that, but Refn uses that type of cinematography to set the tone and atmosphere of the film. Add to this we have the carefully crafted soundtrack by Cliff Martinez which becomes organic, helping further set the mood, pacing and aide the void of quiet in the film, that ‘almost nerve racking please say
a word to break the silence.’ Yet unknowingly the silence of the movie becomes a crescendo, one that again purposefully mutes the volume.

And finally, when that first shotgun blast blares in the theatre, you know what’s happened – you hear it. Then the following scene visually confirms it.

Despite all the meticulous details expressed in Drive, it’s simple in nature and that’s probably the best thing about the movie. Each audience member makes their own reference material, love it or hate it Drive doesn’t pretend to be something else or in fact just can’t.

Overall: If it wasn’t apparent, I really enjoyed Drive. It might’ve been curious to see what Drive would have ended up as, had it been made in 2008 when Hugh Jackman was attached to star and Neil Marshall (2008’s Doomsday, The Descent franchise and Centurion in 2010) was set to direct. Instead the film went from being potentially big budget to a smaller $13 million budget starring Ryan Gosling and him hand picking Nicolas Winding Refn as the director.

I’ve always known Gosling to be a capable actor, I’ve followed him loosely throughout his career and I’m talking way back to the hay-day when he was on TV with Breaker High and Young Hercules. I’ve never been a Notebook guy and I think in fact it’s taken several viewings where I’ve watched the entire movie as a whole in pieces. I watched him in Murder by Numbers, watched Lars and the Real Girl. I’ve never seen Blue Valentine, no real intent to watch Ides of March and maybe down the road I’ll eventually get to Crazy, Stupid, Love.

If I’m trying to make a point here, I always figured Gosling could’ve been that next action star if he wanted to. Or at least dabbled in the genre infrequently, but he never did. I think he’s good at his craft, so it was cool to see him jumping into this type of role. Based from his interviews, he had wanted to do an action movie for awhile, but avoided the usual stunt-driven movies which have inherently defined the action role.

As Drive was heavily inspired, reading up on how Refn cited the Brothers’ Grimm Fairy Tales as a main source of inspiration was a curious approach. Drive as something of a modern day fairy tale brings a different mindset.

In his Q&A at Cannes, Refn stated:

“Two years ago I started to read Grimm fairy tales to my daughter and they’re very simplistic but also extremely complex. It’s minimalism — there’s almost no dialogue, it’s all about descriptions of emotions. The characters are always the same: there’s a prince or a knight, an innocent woman who’s extremely beautiful and pure and needs protection, an evil king or a witch. And that is essentially the DNA of the structure of “Drive.” It’s a fairy tale that takes Los Angeles as the background. The hero, Driver, is very easy in a sense: by day he’s a real human being, by night he’s a real hero. What is there to say, because his mystique is his strength.”

I wasn’t familiar with Refn before this film, but Drive definitely made me want to check out his earlier works with Bronson (2008) and Valhalla Rising (2009). I do think Drive must be watched, but not necessarily in the theatres. Simply because of the immersion it almost demands. The silence in the film I know can be overbearing for some and it definitely showed when I caught the movie opening weekend. Distractions, especially in silence, become more apparent despite how much you try to drown them out: the person rustling in their chair leading to the bathroom break, a person forgetting to put their phone on silent for a text alert or phone call or the unnerving impatience of someone twitching anxiously waiting for the action. It depends on the person, but that’s public movie watching, it’s uncontrolled. So if you want the ‘perfect’ atmosphere for viewing this film, maybe find an empty theatre one day or wait until you’re undisturbed in the comfort of your own home.