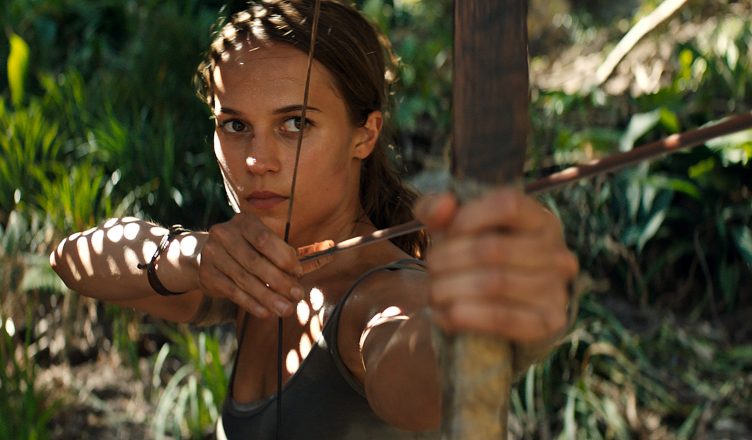 Lara Croft is back in this new version of Tomb Raider starring Alicia Vikander. There’s typically been a lot of negative stigmas around movies based on video games. Namely because they haven’t been adapted well in film. Well, Vikander took up the challenge to follow in the boots of Angelina Jolie’s Tomb Raider (2001).

Let’s start with the most obvious plus for this movie, and I would say that Alicia Vikander did an adequate job of becoming the new Lara Croft. It should be noted that she’s a much better adaptation to the more recent Tomb Raider video games. Vikander excelled at making her character much more grounded and authentic. Her action sequences never relied on the impractical video game issues that would over power a character. Beyond that, the film does a nice job of emphasizing Croft’s resourcefulness in times of peril. Speaking of which, the film really banks on the dangers faced by Croft in different ways. One element that really drives this home is in the film’s cinematography. I thought that the varying camera angles really helped increase the level of suspense during certain scenes. At some points, you even have the cameras directly following Vikander (almost like an over the shoulder view in a video game), which makes you feel apart of the action sequences.

As far as the story in the movie, I thought it was done in a good way that won’t turn off audiences. It wasn’t over simplified, but yet still had a nuance to it to that keeps the film engaging. For instance, I did like the blurring of the lines between myths, science and the supernatural. More over, the mild plot twist was pretty welcoming.

Overall, the movie is pretty predictable. You’ll see the obvious fake-outs coming a mile away.  I think that’ll be more so a knock against the writing and directing. A lot of the call backs in dialogue in the film seem really obvious that they’re setting you up for something. When that something happens, you won’t really be all that surprised. Worst off, the movie does feel like it’s 10-20 minutes too long. As a fan of both Dominic West and Walton Goggins, I felt as though both characters were severly under utilized. (Goggins especially) Goggins, who plays “Vogel”, is a one dimensional character who seems to initially have some potential. When it’s all said and done, his character was just limited and probably could’ve been played by an actor of lesser notoriety.

I think the biggest issue with this film lies in what it did not do. There really wasn’t anything new or innovative that makes this film stand out. A lot of the danger that Lara comes across are things we’ve seen already in films. Not to mention, I rarely got the sense that Lara was in legit danger. I think this could be an issue with the editing of the film perhaps. It’s possible a few different camera angles, or tighter cuts could’ve made certain scenes just a bit more thrilling.

Had this version of  Tomb Raider came out in the early 2000s, I think it would’ve been a smash hit. However, this version of Tomb Raider feels like The Mummy (1999) meets “National Treasure” (2004).  I think that Tomb Raider is worth the watch in theaters for sure, but you’ll need to go in with low expectations. If your local theater has one of those discounted viewing days, I think this film would be the cream of the crop at that point.