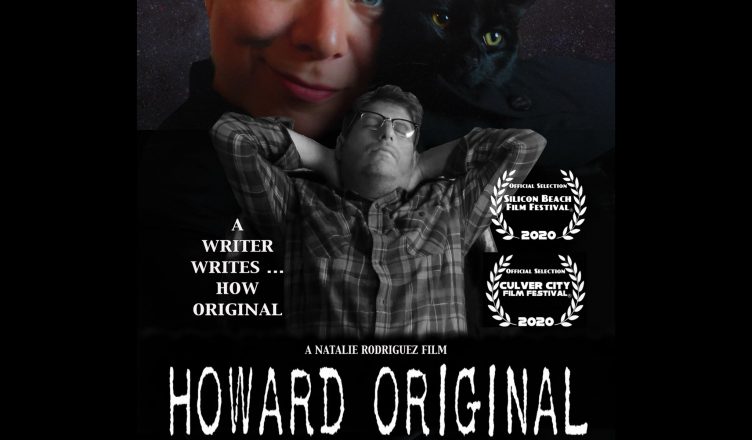 As some of you may have gathered by now, I am a writer.  I enjoy writing.  I have a passion for it.  I write from my soul.  I write every day.  And every day I believe I improve a little bit more.  Including becoming incrementally better at withstanding and surviving the constant barrage of diabolical doubt, rewrites of rewrites, pitiless rejection and self-flagellation that goes part and parcel with this most lonely of pursuits.  So why do I, and so many other otherwise seemingly sound people on this planet, do this for crap sake?  There are no easy answers.  At least none that I’ve found at any rate.

How about this?  We just do.  Hey, who says writing has to always be profound?

Filmmaker Natalie Rodriguez is a writer.  She composes original stories for the movies that she also directs.  Her latest effort, “Howard Original”, explores the world of the screenwriter in a decidedly unusual and provocative manner.  I’ve seen “Howard Original”.  And for the second occasion now, I had the opportunity to talk with Rodriguez about her work.

“Howard Original” is about writing.  The inspiration.  The creative influences.  The process.  The satisfaction.  The pride.  And, alas, the pain inherent in relentless rejection and frustration.  Share with us why you write, Natalie.  What keeps you writing?

When Kevin (Michaels, “Howard Original” co-writer and star) and I first met, we always talked about the writing process as both an indie filmmaker and someone who writes for a studio. That was what, ultimately, created and built the story and world of HOWARD ORIGINAL – those thoughts, worries, and fears of making it and not making it in the entertainment industry. Very much Like HOWARD, what keeps me writing is truly the joy of creating that world, whatever it may be. As we also see in HOWARD ORIGINAL, those characters and the story’s world certainly becomes part of the writer(s)’ life; we care about the characters and want to find out their reasons and goals in life. That is how we felt about sharing HOWARD’s story – why he was so frustrated and wanted to finish his long-overdue script.

The actress audition scenes in “Howard Original” are uniformly involving and hilarious.  We get the feeling that, though on face outrageous, this is likely not too far from the “real world” experiences.  As a filmmaker and an active professional participant, is what we see here on screen what you experience in audition rooms on a regular basis?

We had a lot of fun working with the different actresses that day. Sadly, I can say that many of my peers – both actors and actresses and behind the scenes people such as myself – have heard stories of casting calls gone wrong or many producers faking casting calls to get a date (you get the point) with certain actors. It truly is disgusting how many stories I, myself, and I know Kevin heard over the years. Usually, when I ask some of these peers, who experienced racism or sexism during a casting call, on what they do afterward or during the audition(s) itself, most of them respond with, “Nothing”. The saddest part is how many of the actors are even told by their agents and managers, or by the standards of ‘Hollywood,’ to “shrug (it) off’ and just “take” these type of inappropriate comments or suggestions. I certainly think that is changing, especially with the pandemic happening many unions look to be locking down on specific rules and regulations which should have happened years ago.

**Also, major shout out to Space Station Studios for letting us film at their location; they, unfortunately, closed down due to COVID-19**

Darianna Parra is quite good in the role of your alter ego in “Howard Original”.  The film also reveals her to be one helluva dancer, as well.  So we’re all curious.  Is the talented Ms. Parra doing due justice to your own moves, Natalie?

Darianna was FANTASTIC and we were fortunate to have her on the HOWARD ORIGINAL team. Those dance moves were a mix of improv and choreography. The dance was choreographed by MS. DARIANNA and KEVIN and I sort of suggested what HOWARD would do. Like you always hear with most feature film productions, that shoot date was crunch time, and, in fact, we were losing the sun fast and being outdoors we had maybe around an hour tops to get in that dance sequence with (the characters of) RODRIGUEZ and HOWARD. I wish I was a dancer, but, sadly I am not – I definitely need DARIANNA to give me more pointers. I remember when we shot the dance sequence, Daryl Hall, who is also our film editor, and I were sort of dancing/shuffling around DARIANNA and KEVIN during the dance sequence. Most of the time, I was standing behind DARYL and holding onto the back of his shirt so our shadows would not reflect on-camera. It was my first time filming a dance sequence, too, which (is) something I always wanted to do :)

I have now seen both of your feature films, having reviewed your debut treatise on mental health, “The Extraordinary Ordinary”, earlier this year at this link:

These are two very different stories, and show a decided range in subject matter that interests you.  What other areas of our human condition are you investigating for future releases?

Thank you so much for watching The Extraordinary Ordinary! I am super proud of both THE E.O. and HOWARD ORIGINAL. I love dramas and comedies and definitely want to continue to pursue both. Earlier this year, I was supposed to dive into directing a horror-thriller script of mine, INNER CHILD; but of course, due to the pandemic, it was necessary to postpone until it was safer to be on set again. Something that a lot of peers do not know or might remember, and I am sure I can say the same for KEVIN too, our shorts and TV and feature film sizzles were always different genres. Some of my favorite earlier shorts were a series called THE D, which is about twenty-something-year-old men dealing with the aftermath of a breakup. That was also the first time I worked with a male ensemble. KEVIN was also one of the first people to watch that series. I think that is why KEVIN and I bond on a creative level, because we always want to branch out and try different genres, rather than sticking to one or something that we are individually known for by our peers. We actually talked about that not too long ago, wanting to always try something new story wise and continue to grow.

Kevin Michaels co-wrote the script for “Howard Original” with Rodriguez and stars as the titular character.  I asked Michaels about his inspiration as an actor for this uncommon and broad-ranging role.

Your character of Howard occupies a space far beyond obnoxious.  Did you bring to your most eclectic performance the characteristics of those you have actually encountered in “the biz”?  I would hope no.  I anticipate otherwise. ;]

Howard, as a character, is an amalgam of everyone I’ve met in Los Angeles. Unfortunately, more baddies around than good, and for acting purposes, caricatures of themselves already, so you don’t need to adapt much. I’ve seen a lot of entitlement. Very few people practice gratitude for having jobs. They complain about gatekeepers, secretly wishing to be gatekeepers. I know that sounds pessimistic about the industry, but that’s the place that Howard comes from.

“Howard Original” recently made its virtual worldwide premiere at the Silicon Beach Film Festival, streaming on the Roku Channel.  The movie is now screening virtually at the Culver City Film Festival through this Thursday, December 10.

Rodriguez says that her film is also available for potential screening globally by submitting a request through IndieSeats at this link:

I invite you to enjoy all of my film reviews as “The Quick Flick Critic”, continually updated at:

"Howard Original" (2020): Filmmaker Natalie Rodriguez on her Homage to the Warped and Wonderful World of the Writer

"Howard Original" (2020): Filmmaker Natalie Rodriguez on her Homage to the Warped and Wonderful World of the Writer

Filmmaker Natalie Rodriguez is a writer.  She composes original stories for the movies that she also directs.  Her latest effort, “Howard Original”, explores the world of the screenwriter in a decidedly unusual and provocative manner.