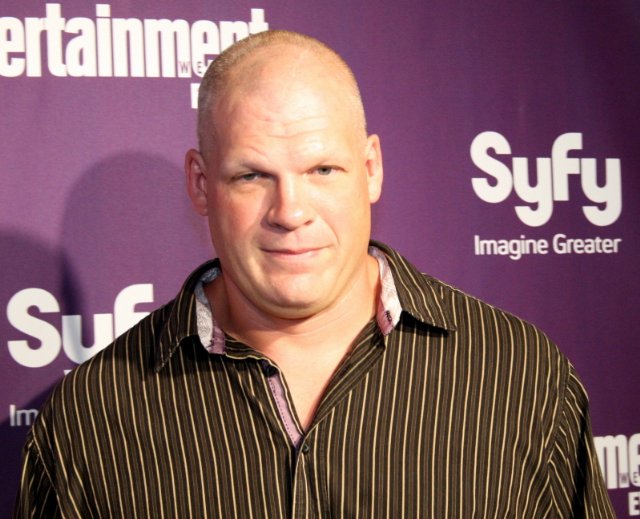 With the release of See No Evil 2 on DVD and On Demand I got a chance to speak to the star of the film Glenn Jacobs, most know him as Kane from the WWE. Glenn spoke to me about See No Evil 2, his current role in the WWE, and his future potential career in politics.

JIM: Hey Glenn how are you?

JIM: So, it’s been a while since the first one. What took so long for sequel it to come out?

GLENN: Hahaa..You know, initially after See No Evil,  which was a commercial success. I was like hopefully there is a sequel and a waited a year and nothing, then after two years still nothing, after year three I was like it ain’t gonna happen. You know I think WWE Films was going through a lot of changes. Changes in leadership and positions. A couple of years ago we hired Michael Luisi, who is a veteran of the Hollywood scene. Michael has a very specific vision for WWE Films. That vision is to make genre movies. Sometime our guys the WWE Superstars are the leads, and sometimes they are not. Sometimes you get to work with people like Halle Berry in the lead. To make the movies quickly, to keep a reasonable budget. You know, See No Evil 2 was shot in 15 days. In most cases they go directly to DVD, that’s what the entire industry is moving to. That’s why the sequel fell through the cracks for a while, with all the changes that were going on.  Michael took over, so doing a sequel fit right in with what he saw the success of WWE Films going forward is.

JIM: The WWE seems to be going back to the horror genre, is that because it’s most profitable and the fans enjoy it the most?

GLENN: I think it’s a combination of both. Our horror movies always do well. It doesn’t take a huge budget, and also with WWE we are still dealing with fantasy. What I mean by that there are certain rules within the WWE Universe.  We create our own world. We have some characters that are larger than life. I think that’s what brings a lot of people into WWE. The element where you get away from real life trials and tribulations. A character like Kane, who at points has been like a comic book hero, and a movie monster himself. For me that character was a natural extension. The same for Dylan with Leprechaun it’s sort of our character extension. Overall, the horror genre is popular cause it’s fun. It’s escapism. People can get away from their own lives for a little while, and enjoy being in another world. I think that resonates with a lot of people.

JIM: It seems like the WWE films and the WWE characters like Bray Wyatt, even ones like Kane and The Undertaker you think the success of them on WWE television gives them ideas for the films with these supernatural characters.

GLENN: Sure, absolutely. The Soska’s wanted to do a movie with Bray Wyatt sort of about Bray Wyatt. His character particularly lends itself to a movie. I would agree our characters it’s easy to take them and put them into movies.

JIM: Speaking of the Soska’s they directed See No Evil 2, what was it like working with them on the film? Anything you took away differently than the first time around.

GLENN: They are awesome! They are truly awesome. I remind Jen and Sylvia quite often not to forget about me when they become big-shot Hollywood directors. I think they are well on their way. When they first signed on to do the movie, frankly I didn’t know much about them. I did some research on then and they sounded really interesting and cool. They game me a copy of American Mary. I saw the movie and it just blew me away, because its so well done. I was thinking this film is going to be killer because of them and their vision. They take a lot of elements from American Mary, the cinematography we call it art house horror, because on one hand you are dealing with disturbing material, but on the other hand they make it look so beautiful. You sit there and you are going like wow this is a beautiful movie, then something brutal happens. I think it makes it even more of a contrast. Like I said they are just great to work with and they have become two of my favorite people in the entire world.

JIM: Is there any plans on continuing this franchise and character moving forward?

GLENN: Ahh, well Jen, Sylvie and I wore talking the other day and we have an idea for See No Evil 3 haha. I had a lot of fun doing See No Evil 2 and the finished product has exceeded my expectations, so yeah I’d like to do another one and would certainly love to work with Jen and Sylvia. If we could somehow resurrect the cast if that’s possible, to work with Danielle, Katie, and all those guys that be great.

JIM: As far as your WWE character, you have gone over a lot of transformations over the years with some memorable story lines. You have been such an iconic part of WWE history, but how has it been for you lately filling in the role as the corporate guy! How has this transition been for you?

GLENN: Actually, the corporate Kane is the most terrifying character of them all. He’s a psychopath with political power (laughs) so he’s probably the worst possible incarnation of Kane. No, I really am enjoying myself. As a performer you want to do different things. Doing this character is a departure of things I’ve done in the past. I think what’s great about it is that there are so many people out there that wish I put the mask back on, and I’m sure that will eventually happen. When that does happen, I hope the anticipation of building up to that, the longer I can keep going with the corporate character the more impact it will have when I switch characters again. I’m also having a really good time working with the guys up and coming like Seth Rollins, Dean Ambrose, Roman Reigns. Those guys bring a freshness to the show and lots of energy, and just a different perspective.

JIM: Yeah, they are also the future of the company, so you are kinda mentoring them along the way.

JIM: I don’t know how long you plan on being in the business, but wrestling is winding down. You seem to have a lot of other interests. Heard that you been heavily involved in politics, is that something you want to purse when your WWE career winds down or try more acting? What’s the plan going ahead?

GLENN: For the foreseeable future I’ll be in the WWE, that’s home for me. As long as I can continue at a high level then that’s what I want to do. I don’t know really past that, it sort of depends on what opportunities I have. The politics stuff, I’m interested in politics because I hate politics haha. My passion is for politicians to leave me alone. I really enjoy acting, I’ve had great experiences with it, mainly cause of the people I’ve worked with. Certainly that would be something I would like to pursue, but we’ll just have to see.

JIM: Appreciate your time Glenn. Continued success with the WWE, movies, and the politics that you hate.

See No Evil 2 is available on DVD everywhere. You can follow Glenn at www.twitter.com/KaneWWE

Thoughts: Glenn was really fun to talk to. Being someone I grew up watching in WWE and was a huge fan of, I found him to surprisingly be very personable, easy going, and funny. He is definitely not like his WWE persona. I liked how he mentioned the behind the scenes approach to the WWE takes with their characters and story lines. Some WWE guys do interviews and stay in their WWE character. Glenn was completely himself, I appreciated that.