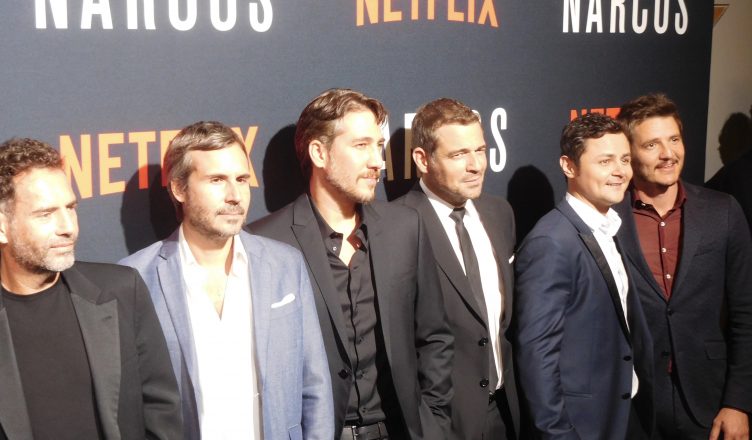 The suddenly hot “Narcos” star Pedro Pascal – he will play the villain opposite Denzel Washington in Antoine Fuqua’s upcoming “Equalizer 2”- celebrated the third season premiere of the acclaimed Netflix series in Manhattan last week with his cast and crew.

Season Three of “Narcos” features a large repertory of actors, many of whom turned up to walk the red carpet at the AMC Lincoln Square with Pascal and “Narcos” director Andres Baiz. The group greeted each other like long-lost friends and spoke mainly in a flurry of Spanish.
Pascal plays DEA agent Javier Peña, and as the only character who appears in all three seasons, he anchors and provides continuity to the show. Last season ended with the death of Pablo Escobar (played by Golden Globe award-nominated actor Wagner Moura) in a rooftop shoot out with police officers and drug agents.

This season the action shifts to another region of Colombia where Agent Peña and his team try to take down the four godfathers who run the Cali Cartel, a vicious but charismatic group. Although he’s still driven to stop drug-related criminal activity as much as ever, Peña looks weary and jaded and comes to realize this may be a hopeless cause.
Escobar is gone, but the show has evolved and become even better. In the way they see themselves and their connection to their families, institutions and country, the Cali Cartel are a fascinating portrait of power and paranoia. And their insistence on loyalty above all from everyone around them gives them a tragic dimension in which they occasionally evoke sympathy. But in case we become too charmed by these characters, the show makes the point that their criminal activities had a wider reach than Escobar’s and their control of the cocaine trade fed the addictions of even more Americans.

Season three opens with the Cali mafia godfathers at a lavish party where they will announce their plans to retire in six months after working out a deal with bought Colombian authorities and politicians for minimal jail time and an opportunity to keep their vast riches. Needless to say, things don’t go as planned for the four drug kingpins and that’s where all the fun begins.
Also at the premiere we spotted actors Michael Stahl-David (DEA agent Chris Fiestl), Andrea Londo (Maria Salazar), Arturo Castro (Miguel’s thuggish son David) and Season 8’s Miguel Angel Silvestre (Franklin Jurado).
Following are highlights from interviews on the red carpet with four of the show’s key players:: 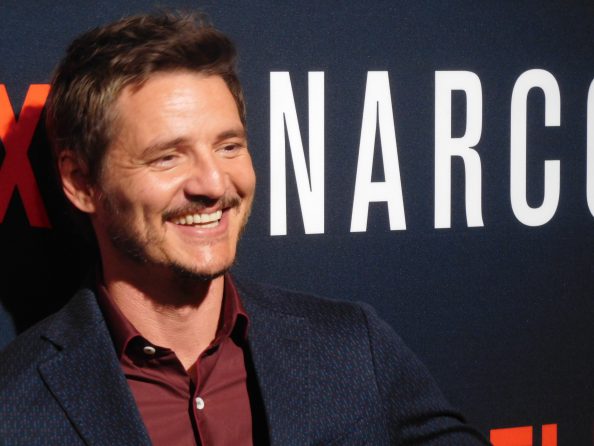 Pedro Pascal on what to expect in Season Three:

“I get a promotion, the character I play. The godfathers of the Cali cocaine industry are lesser known to the world than Pablo Escobar but they’re more interesting, which may be a controversial thing to say but it’s true… There’s more money, more reach… They were just more hidden, which is why I guess they were more successful as cocaine kingpins… Cali is the world’s capital of salsa. There’s different food, more humidity (than in Medellin)… We are dealing with a different enemy, a larger one and a much more insidious one that is very woven into the society that they control so it’s harder to fight. There is an unpredictability factor to Season 3… This time around you’re not going to know what the hell’s going to happen!”

On how Alberto Ammann immersed himself into the role of Pacho Herrera, a Cali Cartel godfather who is openly gay and also violent and vicious:

“About Pacho there’s not much information. You can’t find any videos or any pictures of him. Nobody knows almost anything about him, so it was a very creative process because I was without references, but without real references I started to fly and try to imagine how is this guy and create my own thing. I have some dates, not too many, but I talked to some people who knew him and I was curious about him and tried to do a mix of what and I learned about him and what I imagined how this guy could be. Here’s one of the leaders of the cartel, coming from the place where he comes from, a very poor family, it was very interesting to me.”

Francisco Denis on playing Miquel Rodriguez, one of the major leaders of the cartel, on how he explored his role and whether he’d like to meet Rodriguez, who is – spoiler alert – in a Florida jail:

“I would like to talk to him. I talked to his nephew. He told me that he was exactly like my characterization of him… I would like to talk to him. It’s the best way to see that life… He probably doesn’t see himself as a bad guy. In Cali they say what is the difference between exporting cocaine or exporting whisky? It’s the same. We’re not the bad guys. They system is the bad guys… To immerse myself in the role I read 10-12 books about him, and I don’t like to imitate people, it’s not important to imitate, but to take the spirit of the character and Miguel was somebody who was looking at everything. He was not the guy who was acting, making many actions. He was looking at everybody and then he knew how, where and when to attack…. He liked to be int he background always.”

Artuo Castro, who plays Miquel’s thuggish son David Rodriguez, on how he found his way into the role of this very angry character:

“Thanks to the writing and thanks to the directing it really puts you in a place inside the rage. That was sort of the preparation… It’s so much fun to play a vicious character. If you leave a room and everybody looks like they want to kill you or they’re afraid of you, then you know you’ve done your job right. To get to say the meanest things and get away with it that’s very fun….You do dirty yourself a little bit when you play such a sadistic character but thankfully I have good people around me.”

Michael Stahl-David on his role, which was based on the real DEA agents involved in the Cali Cartel take down:

“I’m a pretty physical guy, so I really enjoyed that, climbing and jumping type stuff involved in raids. It’s a culmination of a lot of work, how long agents had to stake people out, sitting in one spot for ten hours to figure out which apartment the bad guy was in and you’d see which light went off or if there was the same maid they knew was his they could see through the window. I mean there were weeks and weeks of stake outs and that kind of stuff that culminates in a moment like the raid… I’m based on an actual person who’s here (he pointed to a tall man with long blond hair on the red carpet.) We talked a lot and he told me a lot about what actually happened. The most pervasive was a sense of paranoia, the sense of always having to watch your back and the tactics that you employ when you know you’re under surveillance. They were wearing hats and glasses everywhere. That wasn’t going to work in this show because then you’d never see our face, but every time you drive to a location you never take the same route, you always use a circular route… The agents always have their back to the wall… That vigilance lends a real tension to the experience.”