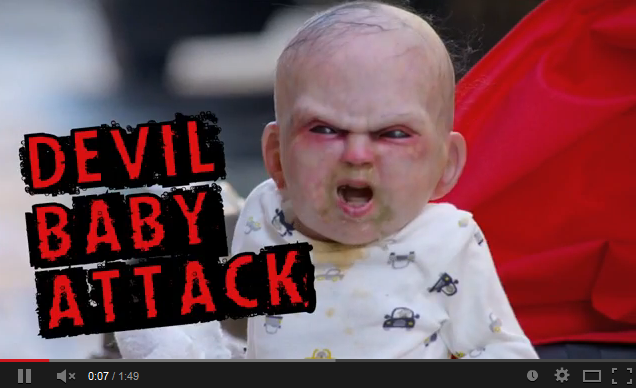 These days I am noticing a really cool video called “Devil baby attack”. It is some kind of promotion for the new horror movie, called “Devil’s Due”. Devil’s due, in a nutshell, is about a young couple who gets married, has a great honeymoon, the wife gets pregnant and the horror begins. What really grabs my attention about this film is that it’s one of those that manage to be creepy and at the same time. Really the whole thing is about how people freak out about a baby with a scary face. The Devil’s Due trailer gives us a great first view of the film, as we get to see that the movie seems to be made out of found footage, the Paranormal Activity style, that is always giving a sense of reality to the movie.

It seems to be ordinary and typical, but nope, this is not the way it is. The pregnant Samantha starts acting really weird and becomes simply evil. The baby inside of her is the devil. YES, the devil and he makes her powerful but with every drop of power it also gives her tones of malefic vibes that are creepy.

It is all about the strength, that it is used in the wrong way, which makes other people suffer. Starring Allison Miller, Sam Anderson and Zach Gilford, Devil’s Due is the movie that shows you how the bad can be incorporated in everything, even in one of the most sacred and pure events of a human’s life, that is the birth giving.

On January 17th, Twentieth Century Fox is going to present Devil’s Due, that is for sure a one of a kind horror film, which has the power to make us feel scared and tiny in front of the devil.