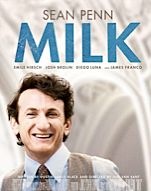 Hey folks. Thanks for checking out our Milk review.

When I first heard that Gus Van Sant (Director of Good Will Hunting) was going to be tackling a biopic on the life of Harvey Milk, the first openly gay official ever elected to office in the United States, I was instantly intrigued due to the fact that Milk is a fascinating character and Van Sant’s strong point has always been his use and portrayal of characters. It seemed like a good match. Add to that mix Sean Penn, who Clint Eastwood once said was the best actor working today (I have him in my top 10) along with a powerful cast, you have the makings of a very special film. Sadly, you also have the makings of a propaganda film. Thankfully it didn’t turn into a propaganda film… but sadly it didn’t quite reach the high level I was hoping for either.

The synopsis for Milk reads something like this: “After moving to San Francisco, the middle-aged New Yorker, Harvey Milk, became a Gay Rights activist and city politician. On his third attempt, he was elected to San Francisco’s Board of Supervisors in 1977, making him the first openly gay man to be elected to public office in the USA. The following year, both he and the city’s mayor, George Moscone, were shot to death by former city supervisor, Dan White, who blamed his former colleagues for denying White’s attempt to rescind his resignation from the board.”

When you have a character like Harvey Milk, you absolutely need an actor who can bring him to life, and Sean Penn accomplished that above and beyond the call of duty. I will agree with a couple of my friends on this point and say that this was the single greatest performance of Sean Penn’s career… and that’s saying something because he has turned in some amazing ones. Somehow Penn was able to bring all of the outrageous flamboyance and strength of conviction that Milk had, as well as the fragile humanity, the fear, the uncertainty and yes sometimes the moral ambiguity he also possessed. I admit having a star like Penn in the lead role made me look at the character at first as just Sean Penn playing a gay dude. But the performance was so good that quickly faded away and all I saw on screen was Harvey Milk. It’s an Oscar worthy performance plain and simple… and perhaps the best performance of the year. Penn’s portrayal of Harvey Milk alone makes this film worth seeing.

The supporting cast does a remarkable job. James Franco (Spider-Man 1-3, Pineapple Express) shows he possess another level to his talent that we haven’t truly seen on screen before now as Harvey’s main love interest Scott Smith. Josh Brolin continues his incredible roll (No Country For Old Men, W) playing the man destined to kill Milk, Dan White. Emile Hirsch rebounds from the dreadfully awful “Speed Racer” and shines in just about every scene he’s in. From top to bottom there wasn’t a single weak performance given. It was a joy to watch.

The story of Harvey Milk is deeply and intimately personal, yet public and national at the same time. A look at a time not so long ago when people in the gay community could legally be fired from their jobs if it was discovered they were gay. It was this environment that Harvey Milk rose up to challenge the system and educate the nation… to make them aware. He didn’t fight battles in the street or in the courts… but rather fought to make people see. This aspect of the story was executed very well on the screen and made you as an audience member feel invested in it. Wonderfully done.

An important story with excellent performances… yet there were many points in Milk in which I felt like I was being preached at where it seemed to me that the narrative of the story was being hijacked by the message of the story (to me, the best films are the ones that allow the message of the film to be experienced and communicated through the narrative). The result was a jarring and almost violent derailing of the story which would take me out of the film each time they did it.

I understand that the use of real historical footage is meant to infuse a sense of authenticity and to make the audience feel like they were there… but in Milk it had the opposite effect on me. Instead of making the experience feel more authentic, it made it feel more like an orchestrated contrivance and a gimmick that was out of pace with the rest of the film.

The film got bogged down a number of times on unimportant side characters or side issues facing Harvey Milk that while accurate, was unnecessary to the telling of the story. The effect was the film losing its flow and made it feel overly slow at times.

Milk is a very good movie with arguably the single best performance of the year in it (given by Sean Penn) telling a story with both entertainment value and message value at the same time (something we don’t see enough of these days). It’s not a perfect film and has several bumps along the way for the viewer, but nonetheless succeeds in its goal. Overall I give Milk an 8 out of 10.