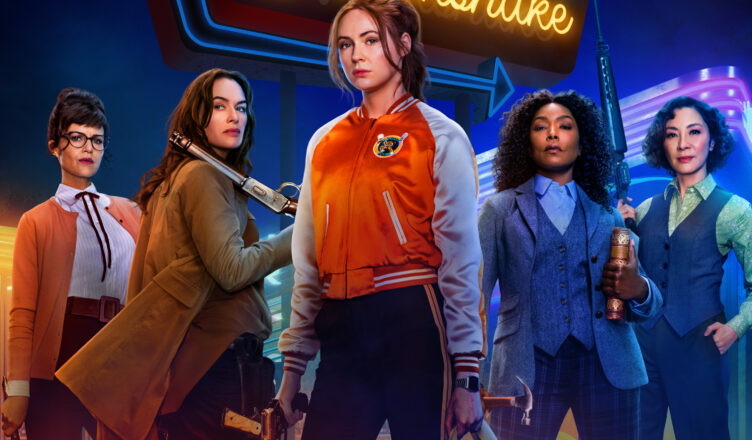 plot . Sam (KAREN GILLAN) was only 12 years old when her mother Scarlet (LENA HEADEY), an elite assassin, was forced to abandon her. Sam was raised by The Firm, the ruthless crime syndicate her mother worked for. Now, 15 years later, Sam has followed in her mother’s footsteps and grown into a fierce hit-woman. She uses her “talents” to clean up The Firm’s most dangerous messes.

She’s as efficient as she is loyal. But when a high-risk job goes wrong, Sam must choose between serving The Firm and protecting the life of an innocent 8-year-old girl – Emily (CHLOE COLEMAN). With a target on her back, Sam has only one chance to survive: Reunite with her mother and her lethal associates, The Librarians (MICHELLE YEOH, ANGELA BASSETT and CARLA GUGINO). These three generations of women must now learn to trust each other, stand up to The Firm and their army of henchmen, and raise hell against those who could take everything from them.

Gunpowder Milkshake really starts to excel when we see the fun visuals during the fights. I can’t put my finger on it but there’s something about the color palette, the humor, and the camera angles that really work well together. Everything in the movie almost seems as if it was pulled from a comic book page and brought to life on screen. There are definitely some good Scott Pilgrim vibes to this movie with the great costumes and set designs.

This movie also has assembled a really good cast. Lena Headey, Michelle Yeoh, and Angela Bassett join Karen Gillian in fun supportive roles. This all-star assortment of women has a habit of scene-stealing from one another and this is where the movie excels. Each character is written in a way that they could easily lead their own film. It’s so satisfying to see them on screen but disappointing we don’t see more. This movie teases some great characters that aren’t even the main characters and leaves you wanting more.

The pacing is a little slow in the first act. There are plot points and story points that need to be told early in the movie. The issue is that the movie does this in a painfully slow way. Gunpowder Milkshake struggles a bit with its painfully slow opening that made me want to see things speed up. The movie has a reason for introducing these plot points and they pay off later in the film but the exposition is dull.

Gunpowder Milkshake is a fun movie with a lot of rewatchability. After learning how the movie ends I feel a bit more forgiving about the way it begins. The cast is phenomenal and although they are some dull points I would recommend watching.