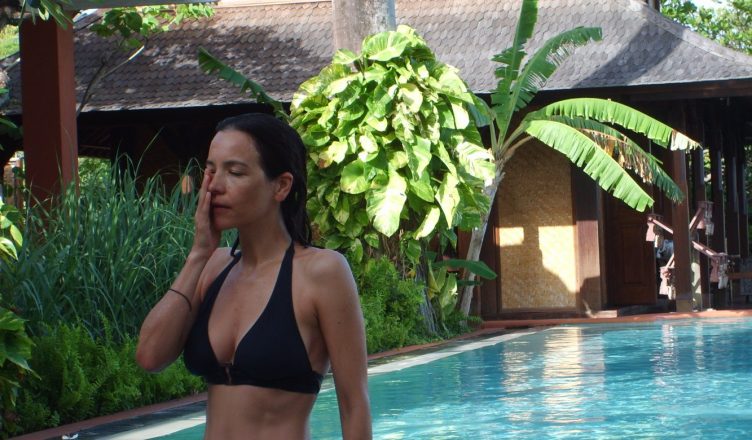 Veteran British actress Elizabeth Healey has never played a part quite at all like the one she brings us in the new film “Across the River”.  Script?  What script?
I recently had the opportunity to offer some questions to Ms. Elizabeth Healey.  Here is what she had to tell me……
I understand that most of what we hear between the two characters is improvised dialogue.  It always sounds quite natural.  Have you experience in Improv?  If not, in what ways did you perhaps find yourself adapting to the style?
Yes you are right – the unique thing about Across The River is that everything you see on screen is completely improvised. It is not unusual to see films that have their genesis in improvisation from which a written script emerges but it is very rare to have a feature film that is totally improvised.  I had done some improvisation before but nothing on this scale so that was definitely a draw. It is very rare you get this kind of opportunity and it was one I couldn’t let slip by. And I found I really loved working this way – it was a totally collaborative process from beginning to end and was a fabulously creative project to be involved in.
Keir Charles was remarkable in his performance, as well.  Describe please your experience working with him on “Across the River”?
Keir was just wonderful to work with – he’s funny and inventive which I think comes across brilliantly well. The film is pretty much a two-hander so Keir and I really had to be able to work well together.  And although there was some rehearsal before the shoot itself, once we were rolling it was totally up to Keir and I how the scene played out, so we effectively created the script in the moment, which is why it feels so real and fresh I think.
I notice that you were a Producer on the film.  Would you share the genesis of how that responsibility came to be and what that was like for you to take on?
I came on board as an executive producer quite late in the process to be honest – I had already been cast and we were filming. Warren was looking for some additional support for the film; I happened to know a few people in the business I thought might like to be involved.
What may we anticipate next from Elizabeth Healey?
I’m currently shooting a coming of age film called ‘PHILOPOBIA’ in Stroud here in the UK.  ACROSS THE RIVER is doing well on the festival circuit and has just shown at a film festival in Chicago  and it is showing in other US cities so I am busy with that too. Also MUM’S LIST, with Rafe Spall and Emilia Fox is just out on DVD as is BBC ONE OF US. CALEB is a lovely film that is gathering lots of recognition on the festival circuit, plus there is a super project that I can’t talk about yet but hopefully will be able to soon. I wrote and directed my first film recently called THE ANGEL OF HULL so I am busy with the post-production on that too.
You can read my review of “Across the River” on TMB  at:
http://www.themovieblog.com/2017/08/across-river-not-may-expect/
Comment with Facebook