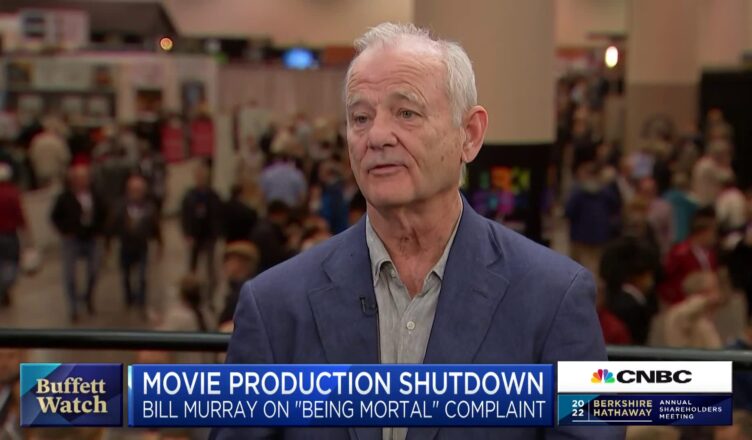 there was a “difference of opinion” with a woman that he was working with that led to the complaint and production pause. “I did something I thought was funny, and it wasn’t taken that way,” he told the outlet.

He did not provide further detail on what exactly happened on set, but CNBC reported that Murray, who spoke about the incident during an on-camera interview with the business network at the Berkshire Hathaway annual shareholders meeting, “was optimistic” that production would restart and that the incident would be settled between him and the woman.

“As of now we are talking, and we are trying to make peace with each other,” the actor-comedian, who is also reportedly a Berkshire Hathaway shareholder, said. “We are both professionals. We like each others’ work. We like each other, I think, and if we can’t really get along and trust each other, there’s no point in going further working together or making the movie as well. It’s been quite an education for me.”

Murray said he’s been spending time since production was shut down thinking about what happened.

“The world is different than it was when I was a little kid. You know, what I always thought was funny as a little kid isn’t necessarily the same as what’s funny now,” he said. “Things change and the times change, so it’s important for me to figure it out. And I think the most important thing is that it’s best for the other person. I thought about it, and if it’s not best for the other person, doesn’t matter what happens for me.”

Murray stated that “what would make me the happiest” is if both he and the woman are able to “go back into work and…trust each other and work at the work that we’ve both spent a lot of time developing the skill of.”

As for his behavior and learning from his mistakes, Murray stated that “I think it’s a sad dog that can’t learn anymore.”

“That’s a really sad puppy that can’t learn anymore,” he continued. “I don’t want to be that sad dog, and I have no intention of it.”

I like Bill’s response here. I am glad he sounds like he’s taking accountability for his behavior and is admitting that he needs to grow. He certainly can’t say or do things today that were acceptable when he was younger. I, for one, certainly don’t want things to go back to the way they were when Bill was a kid. Bill was born in 1950.

I hope this resolves amicably and that this is a learning experience for everyone.