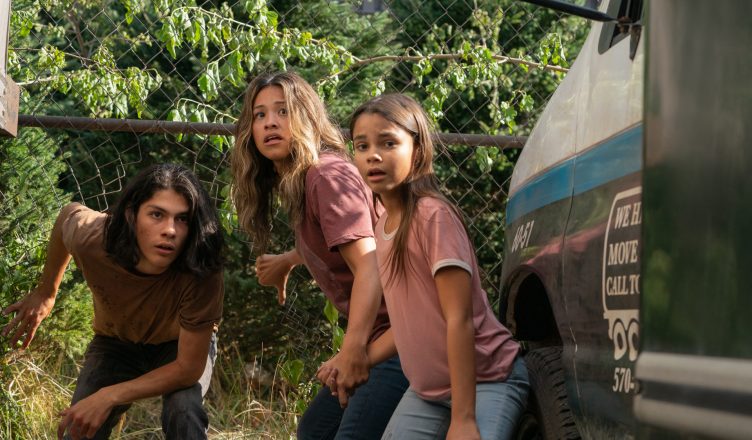 In Awake, chaos ensues after a global event wipes out all electronics and takes away humankind’s ability to sleep. But Jill (Gina Rodriguez), an ex-soldier with a troubled past, may hold the key to a cure in the form of her own daughter. Sleep Is Survival

We get a really fun performance by lead actress Gina Rodriguez in Awake. And no, in case you’re wondering she is not related to Michelle Rodriguez. Gina is fun to watch as Jill, the army vet drug dealer who  relies on her skills and training to navigate a world gone crazy with her 2 kids. I really got into her performance and saw myself rooting for her characters success. She reminds me of Rosie Perez!

It helps a lot that the pacing is nice and fast. Awake relies on the fast pacing for its style of storytelling. My favorite moments are when the filmmakers setup these super intense moments of suspense. These moments wouldn’t have nearly the impact they do if not for the cinematography. You ever notice how every movie that has a car crash does the same identical scene? You know, where the audience gets shocked as the car gets T-Boned by some previously unseen vehicle? Awake genuinely creates some scenes that I think will be copied by other movies for years to come. There are some really wild scenes and you’ll know them when you see them, like the moment you see people them people hanging upside down hooked up to the IV’s!

The plot in and of itself is just an excuse to devolve into a post apocalyptic humans hunting humans scenario. We have scene these post apocalyptic stories a lot over the last 10 years or so and Awake reminds me of any other end of the world story. This setup is complete with the mom navigating the world and a sudden addition of a stranger who assumes the patriarch role. 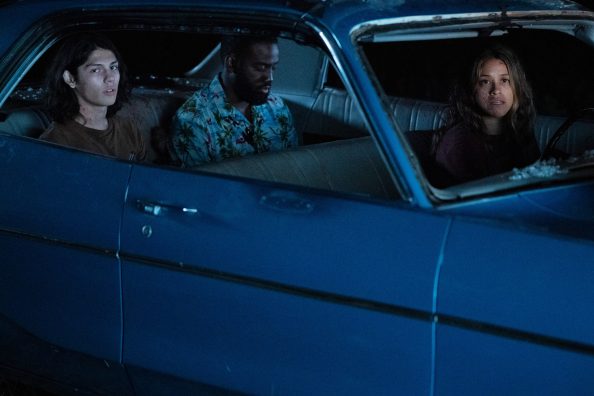 All of these characters are annoying. There’s some redemption with Gina Rodriguez’s character and her mother, but everyone else is annoying or poorly written. Gina’s son gets the shortest end of the stick as he’s the only character the writers avoided giving any development to. He does have his moment in the last act of the movie but that’s it. 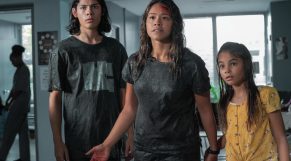 Speaking of the last act, EVERYTHING in the last act is just dumb. I think they were taking inspiration from 28 days later and were going to try to subvert our expectations about safety with the army. Unfortunately it was predictable and devolved in a predictable way.  I hate movies where the adults tell the kinds not to do something stupid and the kids decide they’ll find a smart way to do the thing they were told not to do. These are some first class stupid kids. Like, mom leaves you someplace safe and gets rid of the scary guy and what do you do? Get in the car with the scary guy to go looking for mom in a dangerous place. And out of everyone, out of EVERYONE the daughter who has had some sleep in the past week is the one who gets in front of the soldiers who are looking to exploit her and go “I CAN SLEEP”.

Better than I thought it would be. And it introduced me to Shamier Anderson! We’ll see him in the MCU soon in The Marvels. I do think this is a fun Netflix movie. In that, I mean that it’s a good movie to put on in the background while cleaning or working from home.