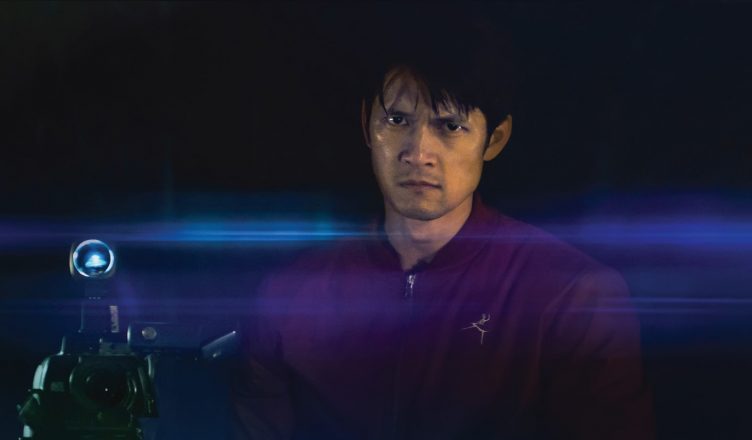 Harry Shum, Jr. who appeared in “Crazy Rich Asians” and “Glee,” appears as James in the Chicago International Film Festival offering “Broadcast Signal Intrusion.” Billed as a blend of “Blow-Up” and 70s paranoid cinema, the film is directed by Jacob Gentry and the cinematography is expertly handled by Scott Thiele. The film premiered at SXSW.

In this film noir offering, James (Harry Shum, Jr.)  is a video archivist. He is also a grieving husband whose wife was either murdered or simply disappeared. James investigates the intrusion into broadcasts in Chicago that occurred, first, on November 22, 1987, with two later episodes where a broadcast to the general public was interrupted by a strange masked figure who appears to be roaring. The appearances of the masked figure are creepy, throwing this mystery into the horror category.

James, who works as a video archivist with analog films and cameras in a one-man shop, becomes obsessed with the episodes of video piracy. His relationship with his employer is strange. They never see each other face-to-face, but notes are left for the James, the employee, concerning his duties. He is eventually fired by memo. Or, as he mutters upon reading the message, “Fired by a fucking haiku.”

James’ wife disappeared or died (not sure which). The date of her demise is tattooed on James’ wrist. For reasons that escape me, James comes to the conclusion that the various dates of the broadcast signal intrusions are related to the disappearance/death of his wife, and he sets out to see if his theory is correct. For roughly half the length of the one hour and forty-four minute film, James is assisted by Kelly Mack, who shows up in a bar and offers her assistance, but only after insisting that James down numerous drinks in exchange for information that she can provide relevant to his search.

The screenplay was written by Phil Drinkwater and Tim Goodall, but it’s not really the sketchy plot that deserves praise; it’s the moody setting of the entire film and the way the actors, including Shum, Mack, Michael B. Woods and Anthony E. Cabral and pull off this Illinois project.

Using Chicago’s skyline and alleyways and moody, gloomy lighting, our hero’s investigation takes him to a storage unit in Peoria, to the Tower Inn and Suites, to LaGrange, with shots of the city skyline and trains and references to a post office box in Joliet. This is definitely a Chicago, Illinois movie.

The set decorating and noirish mood are Top-Notch. The sound is also good, including “Make the world go away” in one scene, and the cinematography and lighting are stellar.  But the plot, when it finally is resolved in its entirety, is not up to the standard of all the excellent acting, moody vibe, and great cinematography that has gone before.

When the film finally reveals its denouement, as the script put it, “Some threads aren’t worth picking at.”

While James is investigating whatever connection there may have been between the 3 instances of broadcast signal intrusion and the disappearance of his wife, he is warned, “Never attribute conspiracy to what is more appropriately termed coincidence.” I’d add, never accept great moody lighting and sound and excellent acting as a satisfactory substitute for a coherent plot that hangs together when revealed.