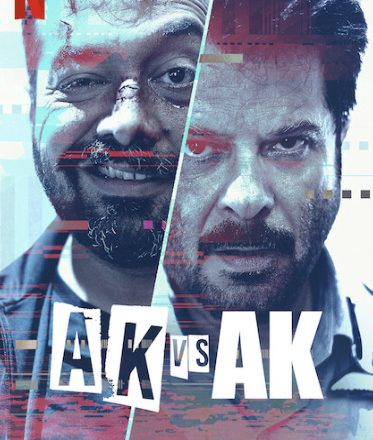 It is now official on Netflix! Director Vikramaditya Motwane develops one of the biggest rivalries in the Bollywood film industry and shares it on the big screens in the form of a dark comedy thriller titled “AK vs AK”. Released on the Christmas Eve of 2020, the film features Bollywood industry’s award-winning director Anurag Kashyap (AK) who takes on one of the most renowned actors in the industry, Anil Kapoor (Another AK). This is no ordinary rivalry. Hold on! Because this fictional meta-feud of the two Bollywood biggies is going to get as lethal as the AK-47!

AK vs AK’s plot is one of a kind. The film has both AK’s playing fictionalized versions of themselves. Anurag Kashyap plays the role of an “eccentric himself” while Anil Kapoor features as the “arrogant himself”. The remaining cast too play their own fictionalized forms.

The scene opens and Kashyap and Kapoor are being interviewed by television host Sucharita Tyagi (herself). It was then that a spark was initiated by an audience member who asked them a silly question. The question goes, “Who is more important in a film, the director or the actor?” This was enough to fire up both Kashyap and Kapoor and they started having a heated argument on the matter to the point where they started insulting each other’s careers.

The argument ended with Kashyap throwing a glass of water at Kapoor’s face! This incident impacted the image of Kashyap as a director and all film personalities who were involved with him, started cutting off ties with him. Kashyap held Kapoor responsible for his misfortunes and decided to seek vengeance. But how?! It was then that Kashyap’s assistant Yogita Bihani (herself) gave him a master idea.

The story moves to Christmas Eve which happens to be Kapoor’s birthday as well. Kapoor is filming at a set when suddenly Kashyap arrives there along with Yogita. Kashyap narrated his upcoming movie’s script to Kapoor. The script goes where a crazy director kidnaps the daughter of an aging actor. Kapoor initially though this all was utter nonsense, until he realized the horror. That mad director was Kashyap himself, he himself was that aging actor and his daughter Sonam Kapoor (herself) has been abducted by Kashyap in real life! Kashyap wanted Kapoor to go on a search for his daughter and he would then film all the incidents that would take place with the help of Yogita. He wanted to capture Kapoor’s real reactions on camera and turn it into a masterpiece work that would boost up his career.

Before Kapoor would go on a search for his daughter, Kashyap gave him five conditions. Those were, he will be given ten hours to find her, any other person should not get involved in the matter, he shouldn’t call the police, all his phone calls must be on speaker mode and finally, Yogita will film the entire thing!

Kapoor set on a search for his daughter along with Kashyap and Yogita in a car. He searched all possible places, but his daughter Sonam could nowhere be found. Finally, he went to the police station but the police where pre-informed by Kashyap that Kapoor would come and enact a play in front of them. While Kapoor was complaining about his missing daughter, the cops actually thought that he was acting a part of some script and started applauding him. They had no idea that Kapoor was in actual distress!

After several searches and bloody chases later, Kapoor came across a CCTV footage which showed his daughter getting kidnapped by three masked men into a taxi. He identified the taxi driver as Javed. More chases, car accidents and gory incidents later, Kapoor finally caught hold of Javed and asked him where his daughter was. To his surprise, Javed leads him to Kashyap’s house. Kashyap too was astounded as this was not according to what he had planned.

When they reached Kashyap’s house, they found map-based instructions that would lead them to an under construction site. They also learnt that apart from Sonam, Kashyap’s parents too had been kidnapped. Kashyap got confused as to what was happening as this was not what he had actually planned!

Upon reaching the site, Kapoor pulls out a script along with a gun from Kashyap’s bag in which it was written “Shoot yourself or shoot me!” Kapoor points the gun at Kashyap and was just about to shoot him when Kashyap pounced on him and a horrendous fight between the two endured. In the commotion, Kapoor’s finger which was on the trigger fired it accidently and Kashyap got shot in the chest. Kapoor along with Yogita took Kashyap to the hospital and with the help of the police were finally able to track Sonam and Kashyap’s parents.

The ending has Kashyap lying on the hospital bed and Kapoor visiting him. Kapoor reveals that the kidnapping ordeal and all the misadventures that had happened till now were part of his plan only. Yogita was actually by his side and he and Yogita had planned to give Kashyap a taste of his own medicine. The entire film showing the kidnapping ordeal was released under the directorship of Yogita and became a mega hit.

Kapoor finally mocks the bed-ridden Kashyap by saying, “I have 40 years of experience in the film industry and nobody messes with me, not even a crazy director!”

Not The Way It Looks!

After reading all this, you may think that AK vs AK is some serious crime thriller. But no! The astonishing part is that all these searches, chases, accidents, blood and gore were shown in a comedy-oriented setting. That’s why it’s a dark comedy and to add with it, a thriller indeed!

What A Plot Twist!

I must say, the ending nailed it all! As the ending approached, I had started feeling pity for the misfortunes of Kapoor who was struggling to find his abducted daughter. But all of a sudden the plot twist came and I was shocked to learn that it was not actually Kapoor who was the victim, but Kashyap himself! I believe that by making the story turn against Kashyap, Kapoor did show that he is the true “Alpha” in the film industry. 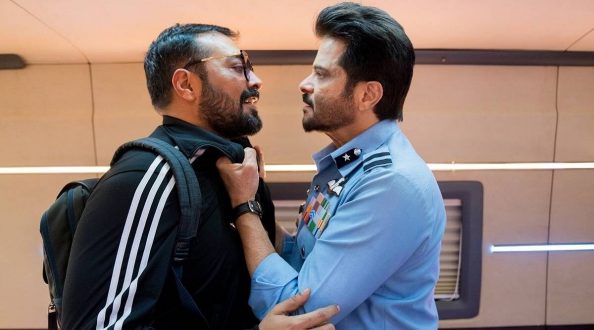 Arch-rivals in reel life but friends in real life? That’s what the two AKs are! I bet you would be awestruck to see them both sitting together and smiling at the film’s press conference and for sure, this time Kashyap didn’t hit Kapoor with a glass of water!

Kashyap and Kapoor’s acting in AK vs AK was out of the world and they both seemed to me to be ready to harm each other as much as they could. Kashyap’s eccentric and lunatic fictionalized version of himself struck me the most. I simply couldn’t imagine that apart from being a film director, he had great acting skills as well. I think he should go for becoming a lead actor in many other Bollywood movies yet to come.

The screenplay of AK vs AK by Motwane and Avinash Sampath has been coupled with some epic dialogues written by Kashyap himself. Sampath deserves some credit here as his enthralling story with an unexpected twist had me staggered. Honestly, Kashyap has some comical dialogues written for the film which I found quite amusing. It really added to the movie’s humor.

Not To Forget The Camerawork!

Note that AK vs AK showed a film within a film. Don’t get confused! It wasn’t Yogita who was filming all this. She was simply one of the actors. The real credits go to cinematographer Swapnil Sonawane and editor Bunty Bhansali. AK vs AK was made a grand success with the help of the precision camerawork by Sonawane which was the actual capturer of Kapoor’s expressions. To add with it, Bhansali’s precise editing and sequential scene placements kept the thrill flowing. 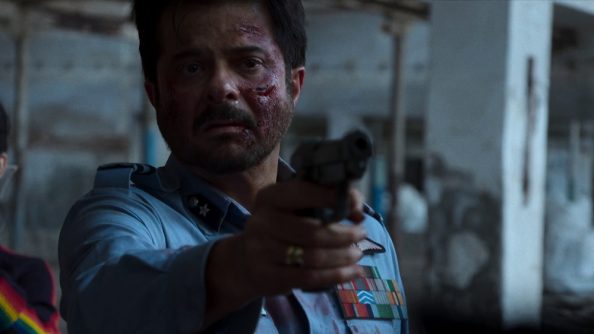 Even if I am addressing the violence shown in AK vs AK as “bad”, I honestly enjoyed watching some real deal action. However, the film did show bloody and gory scenes like Sonam’s finger being cut off by the kidnappers, Kapoor getting bloody all over after chases, accidents and fights and the final scene where Kashyap get’s shot in the chest by Kapoor.

For violence lovers AK vs AK may look good, but if you happen to hate too much violence, then you may probably hate this movie as well!

Reports say that initially Bollywood actor Shahid Kapoor was signed in to star opposite Kashyap and the film’s name was decided as AK vs SK, Anurag Kashyap vs Shahid Kapoor. The script was to go like Shahid rejects Kashyap’s film and Shahid’s wife Mira Rajput would get kidnapped by Kashyap.

However, things turned otherwise and Anil Kapoor along with his real life daughter Sonam Kapoor were signed in instead of Shahid Kapoor and his wife Mira Rajput. The deal was set and the film was titled “AK vs AK”. I think this lead cast change added to the charisma of the film with a veteran actor like Anil Kapoor getting involved.

To conclude, I have to say that AK vs AK is a must watch movie if you are a fan of Anil Kapoor and want to see him go one on one with another AK! 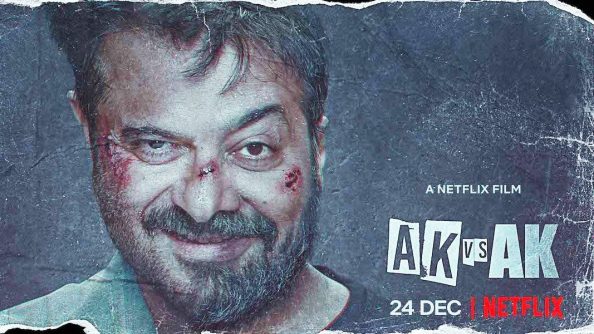 One thought on “AK vs AK (2020): The Fictionalized Rivalry Of Two Bollywood Heavyweights”