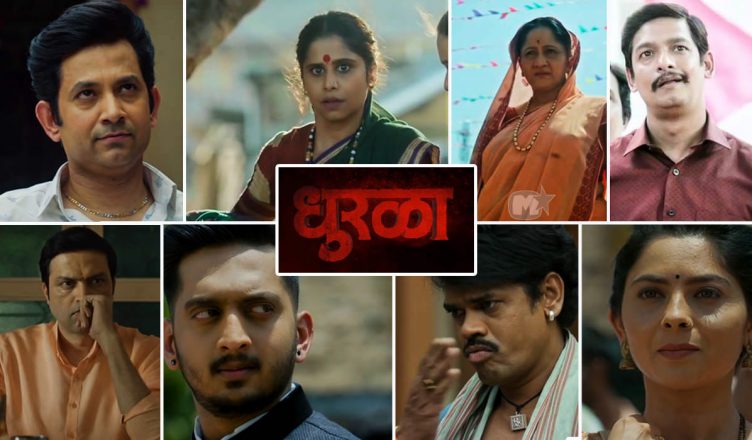 Dhurala is an marathi language movie that was released in 2020. The film is a drama about a political dynamic in the Family of Ambegaon village Sarpanch after his death. The Political is between his three sons Navnnath, Hanmanta, and Nilesh, as well as the two daughter in laws Harshada and Monika.

The rumor is that this movie is based on real life politicians in the state of Maharashtra. It was said that the roles of the characters were based on Politicians Supriya Sule, Aditya Thakre, Dhanjay Munde, and Praniti Shinde.

Anna Ubhe, the village sarpanch, passed away. He left behind his wife, three sons, and two daughters in law. Navnath (Ankush Chaudhari) is the eldest son, Hanmanta (Siddharth Jadhav) is the second son, while Nilesh (Arney Wagh) is the youngest son and bachelor. His wife Harshada (Sai Tamhankar) is pregnant with the couple’s first child.

The conflict begins when Navnath wants to become the new sarpanch, but the women of the community want Hanmanta to contest instead of him. When Navnath finds out, he becomes upset. When elections come, Nilesh challenges Navnath, starting an intra-family conflict. The movie features manipulation from all family parts. From backstabbing to manipulation, not even Leovegas could predict who is going to win this election.

Of marathi movies 2020, Dhurala has been one of the most regarded movies. The movie released in January 2020 and over 500 cinemas in Mumbai and Maharashtra streamed the show. In Maharashtra and India, the movie was a hit and it even made its way over to the USA just one week later. While the overall grossing total of the movie is unavailable, the movie is said to have brought in a high dollar amount.

Is This Worth Watching?

When it comes to dirty politics, nobody does it better than the cast of Dhurala. While the eldest son believes he is fit to fight for the title of the village sarpanch, not everybody wants to be a part of that narrative. While politics is a dirty game of its own, adding the spice of family integration is genius. That’s why the twists and turns throughout are amplified when the family is involved.

In this game of chess, who is going to outsmart who? The game is not over until somebody gets his opponent in checkmate. Until then, the game can turn around at any time, so the family attacks each other’s strengths and weaknesses.

In the end, the plot can be predictable, while the climax seems stretched. In the grander scheme of things, these are minor drawbacks. The plot is smooth and should be deserving of the title best marathi movie in 2020. The film is well-written and well-established. It has an interesting storyline that does not have any dull moments for the audience. With multiple twits and outstanding performances, this was a hit film in 2020 and should be at the top of everyone’s list.