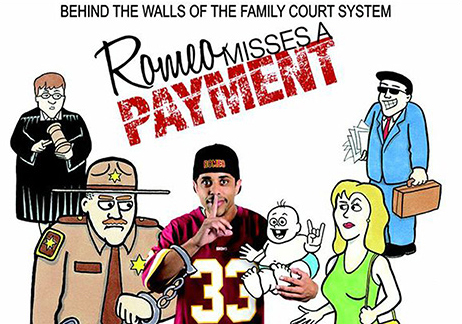 Struggling with finances, time and patience, Director Angelo Lobo knew he must continue his journey of making Romeo Misses a A Payment when the first of several suicide notes appeared in his Inbox.   Written by distraught parents being churned up in the American divorce system, Lobo became determined to force an examination of standard divorce procedure in the U. S.  where in most cases, everyone loses– most especially the children. Motivated by his own experience, Romeo Misses A Payment is a real look at the overwhelming devastation of the American divorce industry and ultimately challenges America to protect families, aim higher, and find a better way.

Incendiary, controversial, insightful, heartbreaking and ultimately triumphant; Romeo Misses A Payment is a must-see film for anyone concerned with families, children and parental rights. Documenting the complicated and often lopsided world of divorce and child custody through the eyes of those affected most, children, parents and extended families, the film also features the expert testimonies of attorneys, judges, and law officers who are caught up in the “business” of divorce. The film is premiering in Los Angeles, New York and London on December 13th – 19th.

In his documentary Romeo Misses A Payment Angelo Lobo addresses a serious issue plaguing America; the unjust child support system. An incredibly insightful film that should be watched by everyone, presenting shocking stories and truths about divorce in America – an endemic that sees almost 60% of marriages end in! Lobo himself is divorced, but he and his ex-wife chose not to go through the Family Law Court System, and after watching this documentary, I really don’t blame them! Together they found an agreement to make their family work and to both spend as much time with their children as possible without the excruciating financial and mental pain of the system.

Lobo travels around America interviewing numerous people from different social backgrounds and societal positions to hear their thoughts on divorce and the family court system. Couples who buy a marriage licence contribute to divorce programmes before they are even married – part of the fee that they pay to get married goes into divorce, presenting a pessimistic outlook on matrimony from the start. It is as though the break up of families is inevitable, merely a part of life. In too many cases this rings true, and it really shouldn’t. In just over an hour, the documentary addresses all the problems with the system, and audiences are invited into the heartfelt stories of the individuals who have suffered its wrath. From ‘deadbeat dad’ stereotyping, to child support fraud, to parent alienation, there is an obvious fault in the system, which appears to work against, not with, the people. The divorce system makes money off broken families; the Government thrives off it. Apparently in 2010 the office of Child Support Enforcement collected $569,000,000 in payments from supposedly dead beats, that had not been distributed to the intended custodial parents or children. Shocking. Dead beat dad seems to be a huge stereotype that sweeps the whole of America when it comes to child support, but obviously it is unjust for every dad to be tarnished with that brush. For instance, those who work minimum wage jobs earn so little, that 80% of their wage can contribute to child support alone. Also, for those who are homeless, jobless, or have drug dependencies, they are still assessed at minimum wage when there is absolutely no way that they can pay this support, thus ending up in jail, or being branded a dead beat. There is little opportunity for ways around the system making it virtually impossible to have a fair start.

There is definitely something pretty wrong with incarcerating people because they have not paid their child support. Did you know you can end up in a maximum security prison if you don’t pay up! WTF?! Yep…chilling with the rapists and murderers. Debters prisons were technically abolished over 100 years ago, so this modern take on imprisoning ‘debters’ makes perfect sense, huh?!

Lobo interviewed John Mutari who was arrested for not paying child support, and has been homed in a maximum security prison; it was a sad sight of a man who looked frail and prematurely aged, no doubt the stress of the system had something to do with this. He was $119,000 behind in payments stating that it is your problem if you can’t afford to pay your child support. When Mutari was finally released, he was soon again arrested for peacefully protesting the system, and declaring his love for his son. This was just one of the many devastating stories to have surfaced from the film. Another particularly disturbing case was that of a marine who was held as a prisoner of war for 5 months in one of Saddam’s prisons. The night he flew back to the U.S he was cuffed as soon as he set foot off the plane and put in jail for not paying the $1425 in child support that he owed. It was not even counted as an extenuating circumstance. DOES THIS MAKE ANY SENSE!? Um, no. Just how bad a circumstance does it have to be for you to be let off the hook?

The documentary is filmed in a close but un-invasive way; Lobo clearly sympathises with his subjects as he films and talks to them, really getting them to open up about their anger and disappointment with such a sensitive subject of a system that seems to allows no sympathy towards the individual. Although the documentary was primarily about the problems with child support and the family court system, the only thing I would have liked to see Lobo touch on was the differing reasons for break-ups in the first place, as perhaps this would have allowed us to see each situation in a different light. A must see documentary, an education especially for those in America who may one day (but hopefully not) have something to do with this system.