I have been converted. Clearly this coming Dragonball movie is doomed because they just wont listen to the fans. They can’t possibly make a good Dragonball movie without first consulting with the rabid drooling fanbase. So here at TMB we have heard your cries and please for mercy. We even started the 68th official petition to stop them from making this movie in hopes that they would take millions of invested dollars and wash them away in the hindsight of the atrocities they wish to inflict upon us.

Here we present you with the REAL way this movie should have been. Like the fans would have wanted! 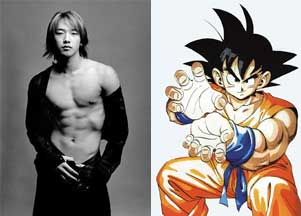 Goku – Rain With the insane popularity of this mega star (somewhere), it is a shame that this multi-talented genius wasn’t offered the role unconditionally. Yes, he may be barely capable of speaking English, but certainly that can be overlooked since he fits the natural look of the monkey-alien Saiyan race! Obviously with North American successes like a minor background role barely better than a cameo in Speed Racer should have elevated him to super-stardom instantly, but in the role of Goku, Kings and Queens would tremble in his presence. 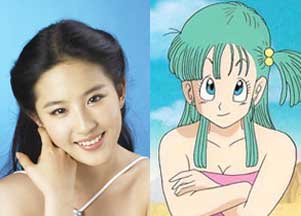 Bulma – Yifei Liu Bulma is said sometimes to be Hispanic, but fuck it. The character is based on a monk parody from Chinese folk lore, so she should be Asian. They also have to dye her hair turquoise or purple so that she will look the part, but Yifei is a perfect choice for the character named after underwear. Anyone could play this token cute sidekick who is just in the show for fanservice upskirt shots. I don’t see why this wasn’t more obvious. 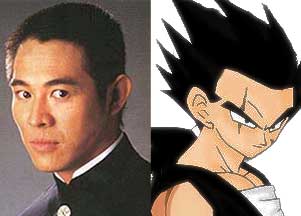 Yamcha – Jet Li The always serious and gruff Yamcha deserves a better actor than a former pop star. And this cartoon has some serious martial arts in it so why not give the role to someone who is capable of martial arts like no other. Jet Li would be perfect for the role. He is rarely seen smiling on screen, so we know he can do the serious disciplined character that is Yamcha! Besides, he already played the Monkey King and we all know that Dragonball is just a ripoff of that legend anyways. 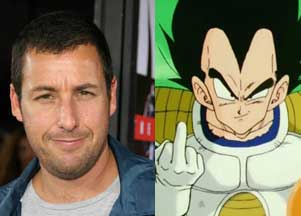 Vegeta – Adam Sandler No one can take Vegeta seriously, so why not let Adam Sandler have the job. At least he embodies the snark and attitude of Vegeta. He does angry to the point that its amusing, and really who else could we count on to stand up to Goku and be forever known for his very serious Garlic Gun than Sandler. That drives the girls crazy, and eventually he marries Bulma, so we have to have someone we like. I know he isn’t Asian like all the Saiyans are, but the attitude will make up for it. 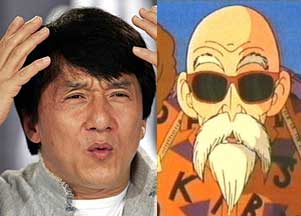 Master Roshi – Jackie Chan Roshi is a cheerleader type character, always on the sidelines acting silly and making exaggerated emotional outbursts. We don’t need someone we can take seriously as Goku’s mentor. He didn’t need it in the cartoon, why would he need it in the movie! So lets get a comedic actor who can still do the physically demanding stuff that is great at being campy silly in a way we all find amusing. Jackie Chan! Master Roshi manages to offer up words of wisdom in the middle of his goofy tantrums, so Chan can pull that off too. And he looks good in a Hawaiian shirt! 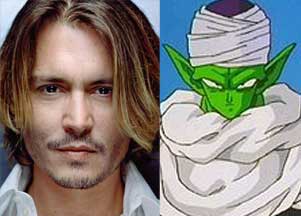 Piccolo – Johnny DeppThe only person who is clearly not Asian in the series, Piccolo could be played by anyone who can pull off a serious Nemesis. And who else to play the angled features and dastardly evil badguy than Johnny Depp. I would have said Matt Damon, but the time has passed where every rumour was that Matt Damon would play a role, so now that job belongs to Johnny Depp. I think the casting of the convincing bad guy should go to the guy EVERYONE wants to see in a movie. So with no real reason other than to go against what they chose to do, I picked Depp to fill the green turban wearing bad guy’s shoes. 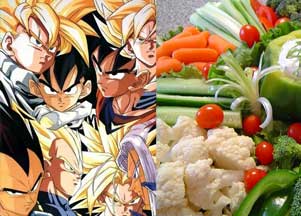 Saiyans – Vegetable Platter The other Saiyans are all so secondary anyways, and if they dare cast non Asians in the roles the fanboys will weep. So I think the remaining Saiyans should be played out by CGI characters using a plate of Vegetables as the inspirational models for 3d. Because only such devotion to the inspired brilliance that is the source material cartoon would be worthy of appearing on screen.

I just cannot stand for this raping of such serious and well thought out material such as the masterpiece that is this children’s cartoon. This presentation of flashy hokey antics and the determined story of a monkey boy from space who is destined to save the world with.. balls.

I can’t see how what they put together could be WORSE than seeing a word for word and image for image translation of this movie to the big screen. I am not ignorant to its popularity, and I think it deserves an adaptation that will not leave those who know nothing of the animated series laughing. Even as I admit to not being a fan of the original source material, I am still more interested in seeing what comes of a big screen. The cartoon is fine on its own – as a cartoon. And despite what some might think, it needs to be changed to appeal to the broader market for which it is intended.

And I am pretty sure that was the intention in adapting the movie.

No one is raping anything, and using “Adaptation” is not an excuse or deception. It is what it is. A movie. And like any movie, they want it to succeed. I would hope that the fanboys would see it as that and at least hope it will be a good movie.

I hope it is, much like I hope ANY movie is good. Might not be, but they are not intentionally creating crap to ruin your fandom. I can assure you of that.