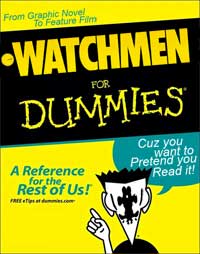 One of the predictions about the Watchmen is that much of the movie going audience will not know about this meaty graphic novel. Unlike other great graphic novel adaptations (that no one knew about – 300, Sin City) is that Watchmen might come off as a little too spandex super hero to really be appreaciated for what it really is. It has that look of the costumed crusader hero team, so no doubt it is a superhero book. But it is a healthy read, and revolutionary in its time.

So for those who just want to get a foot in the door with the original source material, but have the attention span of …. oh.. shiny!… er… oh right.. Dave Gibbons (illustrator of the Watchmen) has made available a video book, and reads an abridged version to you with his own illustrations right from the original pages of the book.

Gibbons takes credit for the illustrations as they are straight from the book, but Moore won’t even allow his name to be attached to an adaptation of his work being read word for word as Tom Stechschulte plays audio book with the novel reading both the male and female roles, a move that already has iTunes commentors and fanboy sites up in arms. Primarily because they must have had nothing else to complain about at the time.

So if you want to get caught up, or even just to preview it, you can hit up the iTunes store and download it for free (for a limited time).

The audio reading is done by a guy, so one of the complaints is that even the female characters are read with a male voice, and frankly the whole thing might take about as long as actually READING the whole thing yourself.

I recommend picking up the collected miniseries in graphic novel form. Its well worth the read.