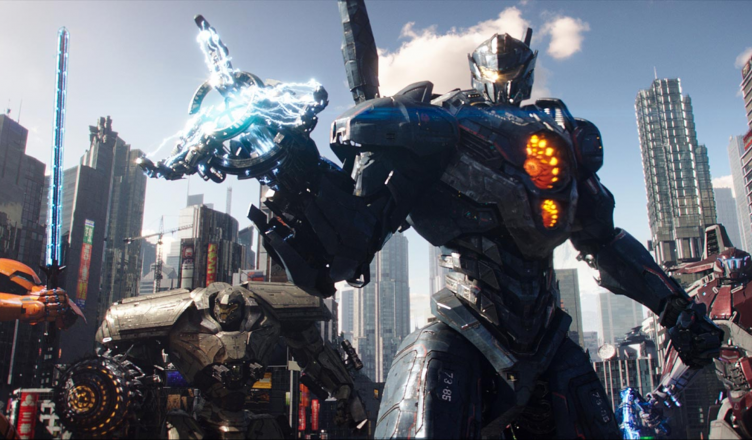 Pacific Rim Uprising is the direct sequel to Pacific Rim (2013) starring John Boyega and Scott Eastwood. Taking place about 10 years after the events of the previous film, Pacific Rim Uprising follows a new generation of Jaeger pilots against a new Kaiju threat. Could this sequel surpass its predecessor? Let’s find out.

Let’s start with the main lead in this film, John Boyega. I thought this may have been one of his better roles in recent memory. He was able to show a more charismatic and even comedic range within his acting skill set. Boyega really stepped into his role of being a leader, similar to his character’s father (played by Idris Elba).  He almost made you want to go jump into a Jaeger and fight with his corralling speeches. One of the best aspects to Pacific Rim Uprising are the new ideas that are introduced. The Jaegers had new weapons and techniques that bring a new wrinkle into the action sequences. When the Jaegers are battling, it’s certainly a sight to see, and rather enjoyable.  I loved how they maintained the Jaegers having their own distinct abilities and personalities depending on the pilot.

Beyond that, the actual plot was surprisingly more interesting than before. The stakes were raised much higher with the new discoveries and developments in this sequel. There’s even a very creative plot twist that will throw audiences for a loop. Best of all, this film had a brilliant idea to give us a different type of monster/enemy that we saw in the previous movies. In other words, it’s not just a rinse, wash, and repeat of big robots fighting big monsters.

This movie tried to do way too much, way too fast. It felt like it wanted to be so many different movies all at once. One example of this would be the ridiculous shifts in tone. When there’s an intense, or even dramatic, situation going on, some misplaced humor would get injected. For instance, if you’re taking heavy gun fire, that wouldn’t be the ideal time to get into some sort comedic banter. Pacific Rim Uprising simply tries way too hard to be unnecessarily funny. The previous film already established a tone, and this sequel took it into a different direction.  Don’t get me wrong, there are some pockets of funny scenes here or there. However, there are moments in the film that are simply so corny you may get dizzy from all of your eye rolls. It’s one thing for a movie to poke fun at itself, but it’s another thing to go from being serious, to funny,  to stupid, then back to serious. If you want an example of this, just pay attention to what I’d call the “Winter Soldier Scene” in this movie. It simply makes zero sense, and you can tell it was shoehorned in there for comedic relief. Sadly, I don’t think you end up laughing with the movie, but more so at it instead.

Another low point is just how little this film did with the supporting actors. Scott Eastwood was so one dimensional and boring. He was basically the exact same character that he was in Fate of the Furious. Adria Arjona’s character (Jules”) was a complete plot device that served no real purpose except to boost both Boyega and Eastwood’s characters’ masculine egos. Even the cadet pilots weren’t developed properly because when certain events occur, it’s just kinda hard to care about them.

Although Pacific Rim Uprising had some really intriguing concepts, it felt like a carbon copy of a movies we’ve seen before. It gave me the feeling that I was watching Power Rangers, meets Iron Man 2, meets any Transformers movie. All of which being directed by Michael Bay. There were moments where this movie really did feel like it just copied pages straight out of Michael Bay’s book. You have the very first scene of the movie being incredibly similar to Transformers: The Last Knight (2017) in the junk yard.  You’ve got a Bubble Bee wanna be robot. Cailee Spaeny’s character “Amara” is almost a carbon copy of Isabela Moner’s character in that film too.  The primary villain (who I won’t spoil for you) is literally just like Rita Repulsa from the Power Rangers. The only thing missing was for the villain to say “You Jaegers are giving me a headache!”.

While watching Pacific Rim Uprising, you will get the impression that when this movie was pitched, it sounded so good in the writer’s room. However, what you see on the screen doesn’t translate well at all. If I’m not mistaken, this is director/writer Steven S. DeKnight’s first feature film. Unfortunately, his amateurism showed. You definitely miss the previous director Guillermo del Toro.

Now let me be clear. There’s a lot of potential and good ideas with this movie. They just weren’t executed well. I wanted this film to be so good. There were many times when the movie felt like it was on the right track, but then all of a sudden gets slightly derailed, and then back on track. Similar to if you were riding a train, you may get to your destination of being entertained, but you may not be fan of that bumpy ride either. At the very least, I am excited if they decide to do another sequel. They just better get a more qualified director behind it.

One thing I can say is that this sequel actually made me appreciate Pacific Rim (2013) a whole lot more. As a matter of fact, if you are planning to see this movie, I’d highly recommend watching Pacific Rim (2013) immediately before watching this sequel. Mainly because they do a lot of call backs to first film. In addition, just go in with low expectations. I mean very low. Like, how low can you go, limbo-low. One thought on “Review: Pacific Rim Uprising Is a Speeding Train That Goes Off The Rails”