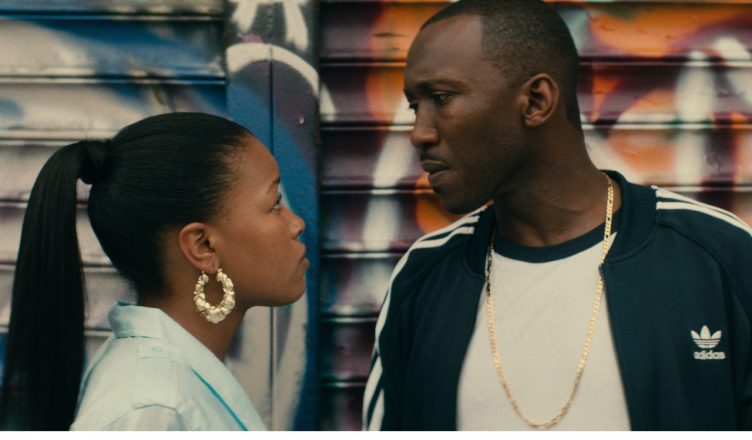 The real Lolita Roxanne Shante Gooden was the focus of attention at the premiere of the biopic based on her life, “Roxanne Roxanne,” which had its New York premiere Monday evening at the SVA Theater in Chelsea.

In 1984 Lolita Gooden was a 14 year-old from the Queensbridge Public Housing projects, with a ponytail, braces and sassy attitude, who beat all the guys in the city’s hip-hop battles. As the story goes, she was doing her laundry when a local record stopped her and asked her to do a response to UTFO’s B-side rap single “Roxanne Roxanne,” about a guy’s romantic advances snubbed by the woman of his desires. Her six-minute freestyle response, “Roxanne’s Revenge,” is Shante’s take on the female point of view and it became a huge hit. (It also sparked some 100 other responses and hip-hop battles.) And this was also the birth of her new name.

On the red carpet, the hip-hop icon, still sassy and still rocking a ponytail, was asked if it was really true it all happened during laundry cycles?

She nodded yes. “Everything starts with clean clothes,” she quipped.

Later during her introductory remarks before the screening, Shante empathized, “This story is not just my story. It’s our story… It’s a story for the domestic abuse survivor. It’s the story for the oppressed mother, the mother who felt maybe she had let her children down or misled them some type of way. It’s a story about hip hop. It’s a story about the ability to be able to never give up on yourself, to know that in the end that if you stay focused and that you understand who you are, and whose you are, that you will be all right.”

Then Shante gave a shout out to Sparky D, who was once her hip-hop rival and was now in the audience (Che Dyllan). “Only God can take you from arch enemy to best friend, only God can do that. And she is one of my best friends now.”

On the red carpet Shante told reporters how she “couldn’t even imagine this moment in her “wildest dreams.”

I reeled her back to reality by asking what her 48-year-old self would tell the 14 year-old teenager who was fleeced by predatory managers?

“Get a lawyer! Absolutely, that’s what I would tell her but I would also tell her that I love her very much and for her not to worry because it’s going to work out in the end.”

The “end” was this glamorous premiere and terrific Netflix film, written and directed by Michael Larnell, which focuses on the hip hop icon’s turbulent life and career. Over the course of her young life she’s abused by men and mistreated by producers, money is a constant struggle, but she never loses her spirit and optimism.

Roxanne is played by recent Carnegie Mellon graduate, Chanté Adams, who won a breakthrough actor award at Sundance for the role. The biopic is compelling and affecting to raise it above the usual level of its genre. Contributing to that is another strong performance by Oscar-winning actor, Mahershala Ali, who plays Shante’s abusive, older boyfriend; his character gets her pregnant when is 16 and then forces her to pay him $10,000 to see her son again. And Nia Long, playing against her usual elegant type, has a meaty role as Roxanne Shante’s alcoholic, depressive mother.

The movie has impressive credits: Forest Whitaker co-produced, along with Nina Yang Bongiovi, Pharrell Williams and Mimi Valdés. Shante herself has executive producing credits and there’s an original score by RZA.

Director Michael Larnell told me on the red carpet he was a fan of hip hop and, of course, saw the “Roxanne Revenge” music video. “She was a very strong character. I’m a big character-driven film maker, and I was drawn in.”

He was also attracted by the opportunity to bring powerhouse women to the screen. “I understand that world. I grew up around a lot of women, so it was just being there. That’s my youth, you know? Like I was a part of their family. I tried to put myself in their shoes,” said the director.

As for how much input the real Roxane had in the film, the director told me, “Oh she was important. But it was important not to talk (to her) but just to listen and ask questions.”

The gorgeous Ms. Long told a reporter on the red carpet of her process to perform the darkest scenes in the film: “I had to think of a super deep painful moment in my own life, which I don’t have many of… to shut down and be raw.”

Asked what those moments were, she replied mysteriously, “That’s personal.”

Before she swanned into the screening, I asked the actress what she learned about herself digging so deep?

“That I can,” she smiled, not giving anything up.

Chanté Adams’s affecting and convincing star performance dominates almost every frame of the film. I told the actress with her name she was destined to play the part.

“I know,” she laughed. “We always say it’s a Chanté/Shante thing She (Roxanne Shante) likes to joke that she worked with my parents before I was born to breed me to be here.”

But how did the 23-year-old learn to rap like Shante?

“Honestly, it was, I went to school at Carnegie Mellon, which is in Pittsburgh, and I would drive home from Pittsburgh to Detroit — it’s a four hour drive — and I would play rap albums while I was driving for fun to try to match their voice and see if I could do all the cool accents Nicki Minaj was doing,” said Adams. “Who knew that it would pay off?” she laughed. “When I went to the audition I was prepared.”

What does she hope girls and women come away with from the film I asked.

“I hope they understand that whatever they are going through they are not alone and that there’s a light at the end of the tunnel, that if they just keep pushing towards it they’ll get there and that it’s beautiful on the other side.”

Adams changes direction next to star in a comedy, “Good Girls Get High,”out later this year.

So do they I teased?

“I guess you have to see the film to find out,” Adams laughed.