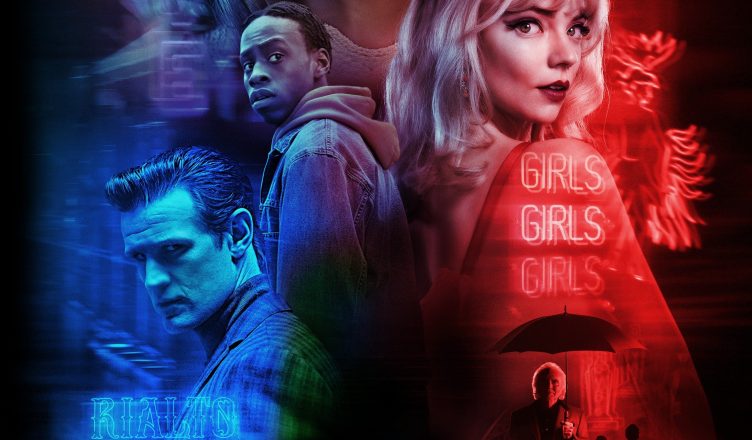 This quote from “Last Night in Soho” director Edgar Wright is a good  jumping-off point, for talking about his newest film, “Last Night in Soho,” which opened in theaters October 29th after premiering in Toronto. Said Wright, “I’ve always been fascinated by horror films and genre films. Horror films harbored a fascination for me and always have been something I’ve wanted to watch and wanted to make.”

That said, “Last Night in Soho” (an area of London known for its sex trade) is not strictly a horror movie. Until the final 30 minutes of the 1 hour and 57 minute movie film, I had no idea where we were being taken by Edgar Wright, director of such films as “Baby Driver,” “Sean of the Dead” and “Hot Fuzz.” It takes a while to set up a complicated plot.

Initially, it didn’t seem as though it was going to be a horror movie at all. The set-up of “Last Night in Soho” seemed to be exploring the family dynamic of a young girl from the countryside (Cornwall) who is an aspiring fashion designer haunted by the suicide of her mother when she was just 7 years old.

We see Eloise “Ellie” Turner (Thomasin McKenzie) in rural Cornwall, where she lives with her Grandmother Peggy, who is a seamstress; her mother also went to London to become a fashion designer, but that did not end well.

Peggy is played by Rita Tushingham, a nice homage to the ingenue from 1961’s “A Taste of Honey” who was a vanguard of the Kitchen Sink school of British film. Not only do we see Tushingham, but Diana Rigg (the Bond girl in “On Her Majesty’s Secret Service” in 1969), in her final film role, is a major character and pivotal to the plot. Terence Stamp (absolutely beautiful in 1962’s “Billy Budd”) also has a recurring role.

For me, this film was a stroll down memory lane. I was an exchange student in England in 1967 and made a special trip to Carnaby Street back in the days of mini-skirts and 60s fashion, including “the tent dress,” as worn by the second star of the film, Anya Taylor-Joy (“The Queen’s Gambit”).

Although I found the multiple tent dresses in Ellie’s fashion show to be pushing the entire idea of the “tent” dress of the sixties, I remember them well. One of the worst moments of my 7th grade school year was when Jimmy Cowell loudly proclaimed that I was wearing “a maternity dress,” when it was,in reality, that season’s new look, the tent dress. (When you’re 12 it doesn’t take much to embarrass you).

I was impressed with costume designer Odile Dick-Mireaux’s work, and the 60s music, selected by music supervisor Kristen Lane is wonderful. The cinematography is great and the special visual effects, which primarily depict the young Ellie communing in dreams (and, sometimes, in reality, it seems) with a girl named Sandy who once lived in the apartment she rents are terrific. The multiple images of predatory men with faces blurred are appropriately frightening and very original.

At first, the film, which builds slowly, seemed as though it were going to be about the country mouse coming to the big city (London) and dealing with all that entails. It seems as though Ellie’s struggle to become a fashion designer at the London School of Design and her super-sensitivity, especially because of the loss of her mother and of a sort of ESP, are going to be the primary focus of the film. Her bitchy roommate Jocasta (Synove Karlsen) says, “I’d lay bets on her slashing her wrists before Christmas.” And perhaps she would have, had she had to endure rooming with the likes of Jocasta for more than one night.

Ellie quickly decides to rent a room of her own, which is advertised by a  kindly landlady, played by Diana Rigg, in her final film role. (Rigg’s presence in the cast is also a nice salute to the 60s).

It seems odd to me now that Ellie never learns the landlady’ name until their final scenes together. Wouldn’t Grandma Peggy want to know the name of the woman who is now Ellie’s landlady? It wasn’t until the final scenes of the film that her name surfaced, however.

I also wondered, “How did Ellie get her money back for the dorm room she would have had to pay for in advance?” These are practical things that bothered me, which have little to do with the plot. My own daughter spent a semester in Brooklyn and we had to pay for her lodging in advance. The fact that Ellie spent only one night in the dormitory and then moved out without negotiating a refund struck me as strange (and unconnected to reality). Her Grandmother did not seem independently wealthy and yet Ellie acted as though money were not an object throughout most of the film.

One line from the film is, “There’s just something about the sixties that speaks to me.” It is uttered by Ellie, but it could have been me. I arrived in the United Kingdom in 1967 for my home stays in three communities: Chislehurst, Weston-Super-Mare and Birmingham. Chislehurst was in Kent, just a short train ride to London, and I visited many clubs like those depicted (an Edgar Wright recurring theme) in the film. I remember the “swinging sixties.” (My favorite pub was “The Three Witches” in Stratford-on-Avon).

It struck me as interesting how faithfully someone born in 1974 (i.e., Edgar Wright) has managed to recreate that era, but Quentin Tarantino (one of Wright’s close friends) did so in “Once Upon A Time in Hollywood.” Both film-makers are spot on. I say this as an expert who lived the sixties aged 15 to 25.  It was definitely THE best decade to be young in this or any country, (although my mother, who was that same age during the Roaring Twenties, might have disagreed.)

At night, in her newly-rented flat that is quintessential 60s, Ellie dreams of a young girl named Sandy, who came to London to be a singer. The young singer is played by Anya Taylor-Joy, who is brimming with the self-confidence that Ellie lacks. The cinematic choices and visuals that cinematographr  Chung-hoon Chung selects are stunning. The film is truly worth seeing for the music, fashion and cinematography alone. But we have the added bonus of a film that morphs from being (apparently) about a young girl trying to forge a career in the big city and dealing with the loss of her mother to suicide at the age of 7 into something completely different.

In some ways, this film reminded me the most, thematically, of the Emerald Fennell Best Picture nominee of last year, “A Promising Young Woman” with Carrie Mulligan. In that film, Carrie seeks revenge on the predatory males who drove her best friend, a rape victim, to suicide.

Although Ellie’s Grandmother warns her about being careful in the Big City, the minute Ellie hits the city and gets a cab, the cab driver (Colin Mace) turns out to be a dirty old man.

It doesn’t stop there.

In her nightly clairvoyant visits to the time that Sandi was trying to make it as a singer in Swinging Sixties London, we see Sandi (whose real name is Alexandra) being victimized by a “manager” named Jack (Matt Smith), who is a bigger predator than the skeevy cab-driver and wants to “turn her out” as a prostitute.

All of this preying upon beautiful young women of the sixties is absolutely  Gospel, but only now, in the wake of Harvey Weinstein are there films about women speaking out and demanding  justice, or taking revenge, vigilante-style, on their own.

Just as I enjoyed “Antlers,” the horror movie showing across the hall from “Last Night in Soho,” I enjoyed this movie and found it to have the clearest claim to Best Costume Design for a film made this year since the Disney epic, “101 Dalmatians.”

The film cost $43 million to make. With its homage to 60s stars and fashions, it was a real kick for me. I’m old enough to remember all of the scenes being presented to today’s audiences as ancient history; I am glad I lived through it as a young person. If you are young, you’ll get a peek back in time; if you’re older, it’s like looking through scrap books.

The music, cinematography, acting, writing (co-writer is “1917’s” co-writer, Krysty Wilson-Cairns) are all Top Notch.  I thoroughly enjoyed the movie from start to finish. It was THE “most anticipated film of 2021” from the Hollywood Film Critics’ organization and will be streaming on various platforms (Amazon Prime is one) by November 19th, 2021.