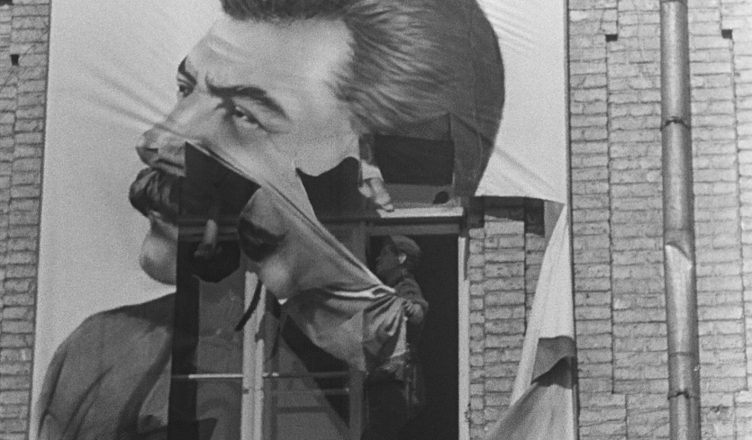 Director Sergei Loznitsa (“State Funeral,” “Donbass,” “Maidan”) has compiled a staggering amount of vintage 80-year-old footage of World War II action in Kiev and Lemberg (Lvov)in the “Babi Yar. Context” documentary. It is 1941; the opening scene is of black smoke billowing over the countryside while firing on a bridge continues. War planes soar overhead.

The 1941 film is black-and-white, although there are a few color pieces of vintage film. Throughout, one is struck by the devastation being wrought.  There are tanks on the roads. Broadcasts from Moscow.  Multiple explosions rock Kiev. 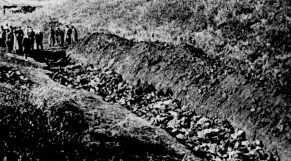 Said Director Sergei Loznitsa, “Some of the footage I work with has been buried in the archives for decades – nobody has ever seen it, not even historians specializing in the Holocaust in the USSR.  One such episode is the explosions of Kreschatik in September, 1941.  Kiev’s central street was mined with remote-controlled explosives by the NKVD (Soviet Secret Service) before the Red army had retreated from Kiev.  The detonations of the explosives were carried out a few days after the Germans took the city. There were civilian casualties and thousands were left homeless.”

Ominously, there is footage of a large group of men, seated peacefully on the ground. Explosions planted by the Soviet secret police, the NKVD, are destroying Kiev. The Nazis decide to eliminate the city’s Jews, driven by the Judeo-Bolshevik conspiracy falsehood at the heart of Nazi ideolog. It is the first attempt to wipe out the entire Jewish population of a large city: extermination by bullet.

The men seated peacefully on the ground are being counted off and loaded into a truck. At one point, one of the Nazi soldiers doing the counting says to another, “What are we going to do with them?”

What they did do with them was cold-blooded execution, killing 33,771 (although estimates up to 100,000 are mentioned by those interviewed). The Germans rounded up the Jews via official posted announcements  (they were told to bring their valuables and food and warm clothing)  and gather on the edges of a ravine in Northwest Kiev  known as Babi Yar (“Grandmother’s ravine”) and then the Germans and some Ukrainian soldiers who had gone over to the Nazi side systematically executed men, women and children. 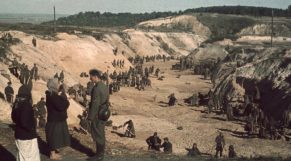 If you were a curious resident of the town who wandered out to see what was going on, that might be your death sentence, as the public notices to show up were made in such a way that none imagined the barbarity of the actions taking place. “Man’s inhumanity to man” is the phrase that reoccurs, again and again.  Flash forward to the photos of genocide against the people of Syria on “Sixty Minutes.” Initially.

Director Loznitsa has a much grimmer take on what happened at Babi Yar:   “I study dehumanization, the loss of humanity by a human being…There was a regime change and, prior to that, a short period of chaos, of lawlessness. It is during this moment when the true nature of a human is revealed.  Without control and pressure from the authorities, in an atmosphere of chaos, it seems that anything is allowed, any action can go unpunished.

I have every reason to believe that back in September 1941, many residents of Kiev had suspected that Jews were going to be killed and not “relocated to the South.” But no one protested.  I study dehumanization, the loss of humanity by a human being. This is why it is necessary to reflect upon this whole situation. It is necessary to think about it.

No doubt there were the righteous among them—those who hid the Jews in their houses, who helped them survive.  But they were few and far between. This is what scares me. Certain individuals committed heroic acts and risked their lives by helping the Jews, while thousands of others remained indifferent to their fate, preoccupied with their own ‘housing issues’ and dividing the remaining Jewish property.

Neighbors reported on neighbors, concierges acted as informants. They used the same lists of residents that they had previously supplied the NKVD with, to report the Jews to the Germans.  After the massacre, a few remaining invalids and elderly Jews in the Podol district of Kiev, who were too frail to walk to Babi Yar, were hunted by the local residents, dragged out of their apartments and stoned to death.  The locals did it, not the Germans.  I saw the archive documents describing these atrocities with my own eyes.”

The film has shots of corpses, many bodies obviously have been there for a while. There are also shots of men carrying dead, bloody bodies out of a prison where the people had been interrogated (and then shot). There are scenes of thousands of men and women digging along the river as though they are happy to help. These people did not know what awaited them. They were told to bring food and warm clothes and any valuables, to prevent them from suspecting mass extermination. Some Jews did fear the worst.  Over 100,000 fled the city.

There is documentation of Nazi troops setting fire to homes, watching the thatched roofs burn.  We see both the occupation of Lemberg (Lvov) on June 21, 1941, and, near film’s end, on November 6, 1943, the Soviets taking back Kiev.

“Hitler, the Liberator” banners are torn down when the town is re-taken. Early in the film, Stalin’s larger-than-life banner is removed to be replaced with one that says, “Long live the leader of the German people, Adolf Hitler.” One mass murderer gives way to another. And so it seems to go, worldwide, since time immemorial.

This compilation of film is truly remarkable. Finding the historical film must have been a colossal task. Jonas Zagorskas and Likas Zapearakas worked on film restoration. The quality of this 80-year-old film, some of it shot by Nazi soldiers with their own personal cameras, is amazing. The Germans were always given high marks for keeping extensive records of the atrocities they committed (which made it easier for judgment at Nuremberg.)

At the end of this series of  historic film clips, there are  trials and testimony. Hans Isenmann, an SS soldier, describes how the Germans methodically divided the killing squads into 6 men to guard and 6 men to shoot, and then armed them with a machine gun, 2 submachine guns and rifles and had them shoot people for 3 days in Babi Yar. Isenmann was a shooter and personally killed 120 people while positioned 70 to 90 meters from the edge of the pit.

The most riveting trial testimony comes from two women.  One woman, with her son, made the mistake of going out to the ravine out of curiosity. The woman and her son were told to line up and she was a witness as they shot her son. Then, she fainted. When she came to, she “played dead” from 9 o’clock until 5 p.m. Then, she got up and went home.

Dina Pronicheva, another witness, tells an even more harrowing story of witnessing the murder of naked victims, who were lined up single file. She jumped into the pit and hid amongst the dead, whom she describes as making hiccupping and moaning sounds in their death throes.

Two Nazi soldiers, noticing that she didn’t seem to have any visible blood (she was not shot) stood on her arms with their nailed boots, yet she didn’t cry out. Then, they began to bury her alive.

That is when she decided it would be better to be shot than to be buried alive. As the soil began to suffocate her, she moved her arm and dug herself out.  She could see flashlights (“torches” in her testimony) from above.

Dina crawled up the wall of the ravine, which was very difficult, and heard the voice of a boy of 14 behind her—a young boy who, like herself, fell into the pit uninjured when his grandfather was shot.  They crawled across a large meadow and hid, as the sun was rising, and now she testifies to these atrocities.

It is film like this that must be preserved against the Alex Jones’ of “false news” who say the Holocaust never happened. Historian Boris Czerny, a specialist in Jewish history in Eastern Europe tells us: “Nearly 1.5 million Ukrainian Jews were murdered between 1941 and 1944. Almost 80 percent of them were shot dead. Executions continued at Babi Yar long after September 1941. The Nazis killed nearly 100,000 people there until Soviet forces liberated Kyiv in November 1943 – not only Jews but also Ukrainian opponents of the occupation, Poles, Roma people, the mentally ill and prisoners of war.”

The synopsis accurately described “Babi Yar. Context” as a masterfully crafted study of a human catastrophe that stands out in WWII history for its barbarism. The documentary is immersive, captivating and deeply distressing.

Bearing witness to past tragedies is the first step if we’re ever going to avoid them. Said the Director, “I believe we must learn the truth.” He added that knowledge of history is the best defense.

The film is intended for the long-overdue Babyn Yar Holocaust Memorial Center. When complete, it will speak against such atrocities forever. It’s a riveting 2-hour slice of history.