“Roe v. Wade” follows Dr Bernard Nathanson (Nick Loeb), the narrator of the 1984 anti-abortion film The Silent Scream, from his first interaction with abortion in 1949 – when his girlfriend at the time terminated her pregnancy – to his change to a virulent anti-abortion stance in 1985.”By film’s end, Nathanson changes sides as dramatically as the real Jane Doe (Norma McCorvey) did.

It’s hard to know where to start in critiquing this slow-moving, poorly paced polemic. 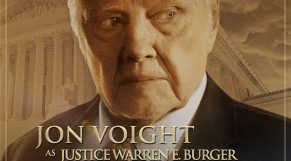 The 2020 “Roe v. Wade” is co-directed by Nick Loeb and Cathy Allyn and the writing credits go to those two and Ken Kushner. There are other films with an ultra-conservative point-of-view, like this one, that smeared Obama and slandered Hillary, written and directed by Dinesh D’Souza. Those films were equally biased, but at least they were well done.  Here, viewers are subjected to 112 minutes of poorly staged treacly, unconvincing monologues, delivered by a motley crew of actors.

Dr. Bernard Nathanson, the lead, is portrayed by Nick Loeb (Loeb is also the writer/director and producer). It seems to be Loeb’s vanity project for reasons both personal and philosophical. The press kit insists that this version of events is accurate because facts and figures were made up by Roe v. Wade supporters. (Of course, we are to accept that every point-of-view presented here is Gospel, including the general rock-throwing at Planned Parenthood.)

When the wives and daughters of various Supreme Court Justices weigh in at their family dinner tables onscreen as being in favor of abortion rights for women, the inference is that these women are to blame for the court’s ultimate decision. Actually, according to a new NPR/PBS NewsHour/Marist Poll, 77% of Americans favor retaining Roe v. Wade as the law of the land, but most citizens want restrictions (most of which already exist). 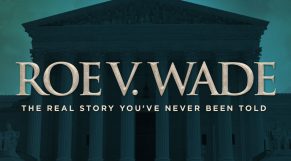 The character of Larry Lader (Jamie Kennedy) is  interested in making money from the abortion trade. Lader converts Dr. Nathanson, who is, at first, very enthusiastic about earning blood money by providing abortions on demand. To show this, the script unwisely has Nathanson (Loeb) and the others in the room sing a song about abortion as follows: “There’s a fortune/In abortion/You never bother/The real father.” Later, when he recants, Loeb has a scene that is far beyond his acting range, which we can call the Norma McCorvey Reversal scene.

None of the people in the scene can sing. Not a lick. The scene is excruciatingly bad, but it’s not the worst in the film. There are plenty more to come. Buckle up.

Playing the lead in this film would be a stretch in the hands of a good actor, since abortion is a sensitive, controversial, complex topic that deserves a sensitive, competent actor as the lead. Here, Loeb is out of his depth as a thespian. Loeb has said, in  interviews, that he decided to play the part because two of his former girlfriends had undergone the procedure and he now regrets their actions. (He has since become the father of a daughter).

The film does have seasoned, competent professionals who attempt to carry off this anti-abortion hit job, but the writer/director/producer and actor are all Loeb, along with fellow writers Cathy Allyn and Ken Kushner. Loeb’s tuneless off-key serenade was just a small taste of the bumpy road ahead.

There are several long, boring monologues that come off as preachy and embarrassingly bad. [It was really a chore to get through the scene with the actor reading as though he were an unborn fetus.] Robert Daniels (“The Guardian”) called these speeches “mawkish grandiose speeches that ring hollow.” Daniels was being kind. Daniels dubbed the film “An Anti-Abortion Film of Staggering Ineptitude.” He went on to single out Loeb as the worst of the cast, while calling the acting of the others “tacky.” “The Daily Beast” revealed that Loeb and Allyn were initially supposed to be simply producers of the film. They had to assume directing duties when the film’s director and first assistant director bailed. 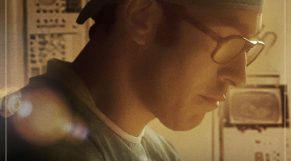 There were more problems, as Daniels shared  (3/25/2021 review):  “In a 2018 Hollywood Reporter piece, Loeb explained that the crew’s electrician told him “F*** you,” threw her headset on the ground and quit the project. The costumer left, too.” Regarding filming at Louisiana State, “We were told we were rejected due to our content, even though it will be a PG-rated film.” From The Hollywood Reporter: “They refused to put it in writing, but they told us on the phone it was due to content.” Tulane—Loeb’s alma mater— refused to accommodate the crew, as did a New Orleans synagogue.

The script calls feminism “destructive” and invokes Mother Teresa and Susan B. Anthony as pro-life while tearing down Margaret Sanger, the founder of Planned Parenthood. Sanger drew a sharp distinction between birth control and abortion and was opposed to abortion throughout the bulk of her professional career, declining to participate in them as a nurse. Sanger, however, felt that in order for women to have a more equal footing in society they needed to be able to determine when to bear children.

Speaking of “determining when to bear children” and having a pro-choice right to determine what happens with your own body, if female, there has been speculation that Nick Loeb’s desire to make this film stemmed from his failed 4-year relationship with Sophia Vergara (“Modern Family”), which ended in 2014. (A year later, she would marry Joe Manganiello).

Vergara and Loeb, when a couple, froze her fertilized eggs, undergoing IVF together in 2013. In 2017 Vergara filed legal documents to block Loeb from being able to use the embryos without her written consent. Loeb fought for the right to bring the embryos to term via a surrogate. Recently, a California judge has permanently blocked Loeb from using the embryos without Vergara’s  permission. [That dispute embodies, in a microcosm,  the film’s main theory about who should have total reproductive control.]

I lost a friend to a self-induced abortion gone wrong in 1963.  Despite my Catholic upbringing, I think women deserve a choice in what happens to their bodies (and their eggs). The ultimate decision should be between the woman and her physician, with strict guidelines (as has always been the case), not a decision by a group of old white men like those portrayed in this film, or by just one party in an IVF scenario. I wouldn’t be thrilled if my former fiancée decided to take my eggs and bring them into the world without my consent. 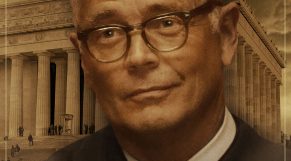 Millions have been spent on the “Roe v. Wade” film project (figures ranged from $6.5 to $8 million). The film seems to be a single-minded attempt to convince the world of the “rightness” of the POV of its writer/producer/director and star and the conservative community. If you have enough money and know how to manipulate the levers of power and use propaganda, you can weaponize  propaganda to seize and hold power. [We’ve seen that as recently as January 6th.]

This is not a good screenplay. Many of the weak performances simply add insult to that injury. “Roe v. Wade” also offers inarticulate editing, patriotic tableaux, repetitive flat compositions (often involving static Supreme Court goings-on), ineffectual camera zooms, insufferably grandiose speeches, tuneless singing and a cast that reminded of “The Gang That Couldn’t Shoot Straight.” In this case, the “shooting:” disseminating pro-life propaganda for a paycheck.

Undoubtedly, some of the principals are deeply committed to the premise that abortion is a scourge; nevertheless, the more well-known the actor, the more detrimental to his or her body of work this film will be. It’s really difficult to believe that “Roe v. Wade” won any awards, although Jon Voight is a well-known Oscar-winning actor (“Coming Home,” 1978). At almost eighty, Voigt plays Warren Burger, who was then 66.

It is surprising to me that any reputable actor or technician wanted to be involved, unless they were in Pro-Life Crusader mode. (As reported elsewhere, the gig was not universally embraced by cast or crew.) In a March 3rd article in The Hollywood Reporter (“Nick Loeb’s ‘Roe v Wade’ Actors Cry Foul Over No-Show Paychecks),  New Orleans SAG-AFTRA actress Susan LaBrecque complained that, after 2 years, she and as many as nine other actors have yet to be paid for the New Orleans shoot in 2018, despite the film’s premiere at CPAC last month. They’ve now gone to SAG-AFTRA for resolution. [Co-director Cathy Allyn responded to The Hollywood Reporter that the funds had been released to SAG as of Feb. 10. “They have the money and it’s up to SAG to release it.”]

Loeb hosted the world premiere of his film, Roe v. Wade, on Friday, February 26th at the CPAC (Conservative Political Action Committee) host hotel, the Hyatt Regency Orlando. The Conservative gathering featured Donald J. Trump as its keynote, Trump’s first post-presidential appearance.  Loeb arranged for the movie to premiere in order to sell tickets to funnel into marketing costs ahead of an April 2nd release on Amazon Prime, iTunes and PVOD.

In a “Hollywood Reporter” interview, Loeb said, “But it’s not a preachy, pro-life, religious movie.”

Yes, Nick, it is. And, unfortunately, not a very well-done one.