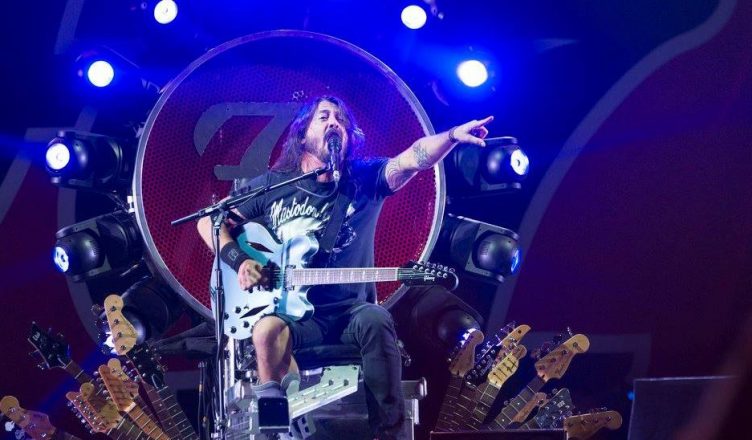 The heartwarming story of a small Italian town (Cesena, Italy) and its wacky crusade to convince Dave Grohl and the Foo Fighters to come give a concert in that town is the central drama of “We Are the Thousand,” a film written and directed by Anita Rivaroli.

Even more inspiring in this story about Fabio Zaffagnini’s creative approach to the problem of getting one of the most popular bands on the planet to visit a town of roughly 100,000 residents is the joy that the participants created in organizing and launching their hare-brained project and, in the process, creating an enduring musical monster.

Make no mistake: this was a Herculean task that the team worked on for over a year.

The idea was to gather 1,000 musicians and have them all form one big band. The first (and only) song they were all going to try to learn to play together was Grohl’s “Learning to Fly.” The crew set to work crowdfunding and trying to raise the roughly 40,000 Euros that was the bare minimum needed for the project. Among the problems: not enough headsets for everyone and no money to buy them.

There also was the matter of the distance that sound travels and how the members of the group would manage to play in synch, when they were going to be filling the Parco Ippodrome, a large outdoor race track near Cesena. That was when one of the organizers thought up the idea of a visual metronome, like a stoplight, which the drummers could see and, therefore, keep on the beat together.

Musicians from all over Italy and Europe, hearing about the project, sent in videos of themselves playing their instruments or singing. From those rough “auditions” the 1,000 were selected and—at their own expense—told to show up on July 26, 2015, to be part of the event.

The “Rockin’ 1000” were from all walks of life: truck drivers, doctors, perfume shop workers, you name it. One said, “We’re forced to live a normal life to support our dreams. So we keep our shitty jobs to keep our dreams alive.” Another shared, “It was about achieving something.” Termed “a sociological and musical experiment,” the band is shown taking a pledge not to showboat and/or show off during the practice sessions. Then they begin rehearsing.

The drummers, all drumming in unison, “felt like an earthquake” said one participant. Another said it was as though a shock wave had gone through the arena, as the musicians were “flooded by sound.” And the sound is pretty good!  As the organizers said, “An engine like this can take us a long way.” Another added, “It gave me goosebumps in every language in the world.”

With the guitars, singers and drummers playing their hearts out—(although cautioned, “Don’t hit the drums like a madman!”)— the one thousand became “the biggest rock band on Earth.” Said one, “What we did here is just a huge, huge miracle.”

After the video shoot of the gigantic rock band performing at Cesena’s racetrack, the plan was to post the video, asking Grohl and the Foo Fighters to come play a concert in the small Italian town. Once posted, on July 30th,—four days after the performance— the video began to climb in hits: 10 million hits—-15 million hits in 3 days—-26 million hits. It finally got Dave Grohl’s attention. He explains (in Italian), “Well, now we have to come. It’s f***ing amazing!”

There are then the scenes with the band members attending a Foo Fighters concert and, for some of them, playing alongside Dave Grohl. Fabio’s crowd-surfing to the stage was one of the highlights of the film. Actually getting to meet their idols is obviously life-changing for the band members. “It changed the spiritual current. It changed how people think,” said one.

Fabio from Fasignano does not disappoint, continuing his efforts to maintain “the biggest rock band on Earth” post-Grohl and entering the arena dressed in a robe that says, “The Italian Stallion” (a nod to the movie “Rocky”).

The extreme joy of producing music with others is not to be under-estimated. Renato—a participant from Perugio who had just received a bad health diagnosis—described the act of playing in the band as better than any therapy he might have asked for and, one year later, is still playing with “the rockin’ 1000.”

Cinematographer Pasquale Remea has captured the elation of the crowd and the joy in human community that music can and does provide. It’s a feeling that those who have participated in a band or an orchestra or a chorus or a choir or even just a duet can relate to, and even some of our most influential films have acknowledged that music is “the universal language,” as Speilberg’s “Close Encounters of the Third Kind” testifies.

This documentary (in Italisan with English subtitles) is a feel-good film for our time. It goes on well past the triumphant Dave Grohl scenes to show that the sheer joy of producing harmony is as euphoric, in its own way, as making a dream come true through hard work, creative thinking, dedication, and an influential video that achieved its goal.