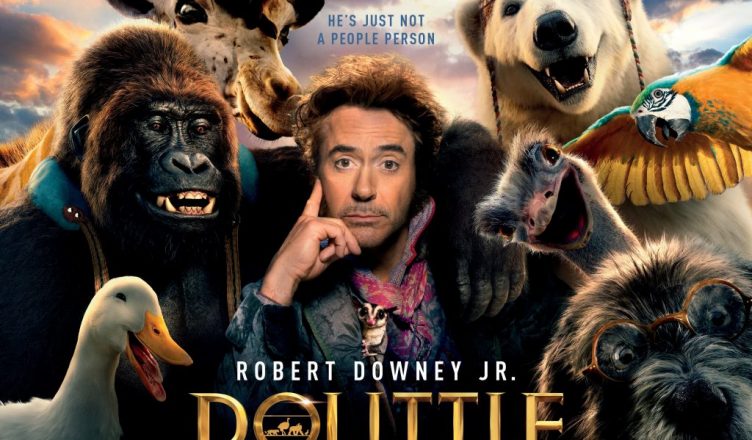 What would happen if a film with a very interesting plot simply fails the box office just because the crew didn’t make things happen properly? Well, this is just the case with DoLittle starring Robert Downey Jr. with his whole bunch of CGI animals. Writer and director Stephen Gaghan adapted this film from the Dr. Dolittle children’s book series by author Hugh Lofting. If you happen to come across the theatrical release poster which shows Robert Downey Jr. seated in the middle with several animals surrounding him, the very first thought which might strike you is, “This is sure to be some interesting stuff!” But let me tell you this harsh reality that upon watching the film you will be nothing but disappointed.

DoLittle’s plot looks very interesting and it takes us to the Victorian era Britain where veterinarian Dr. John DoLittle (Robert Downey Jr.) leads a very isolated life in his lush manor after the death of his wife Lily (Kasia Smutniak). Dr. DoLittle’s only companions are his exotic animals with whom he communicates on a daily basis. Things change for Dolittle when he is summoned by the young Queen Victoria (Jessie Buckley) to cure her deadly illness. He soon discovered that the queen has been poisoned and the cure is the magical fruit of Eden. Eden is a faraway land where Dr. DoLittle’s wife Lily was born which kicks off an epic adventure to the mythical island to find the cure for the queen. During his journey Dr. DoLittle encounters some bandits led by their leader (Antonio Banderas), who seems to have some grudge against Dolittle.

If you look at the plot, you will assume this to be a very interesting movie if this were put in the hands of a more competent crew.

Since human beings came into existence, they have done nothing but abuse or kill animals for their own selfish needs. I feel that the best thing about DoLittle is its concept which makes it very clear that humans and animals can share a bond of love and mutual understanding between themselves and can co-exist in a friendly atmosphere. However, this is far from real as we can see how animals get abused by us for meat, leather and what not!

A visual treat for the children

I am pretty sure that this fairytale movie owing to its CGI generated animals and sceneries, is capable enough to be a visual treat for the kids. Children usually get amazed by bright visual imageries and the motive of this film seems clear, which is to capture the children as its mass audience. Besides, the gorilla versus tiger scene in the movie may also interest them a lot.

Unfortunately, the bad surpasses the good for this film. Owing to the terrible screenplay by Gaghan, Dan Gregor and Doug Mand, the film couldn’t keep up to its amazing plot. Upon watching the film I found out that many scenes were haphazardly shot which created a lot of confusion as to what was really happening. Let me put this in a funny way. The shots appeared as if someone has tried to solve a jig-saw puzzle with all scenes jumbled up. The scenes then have been forcefully put together along with weirdly looped dialogues which appear to have come from some recording studio. The voice quality of all animals including that of Robert Downey Jr. is extremely absurd and disembodied. I was unable to understand which animal was speaking when, which resulted in total dissociation. Also upon watching the animals closely you will get the essence that they are computer generated which makes the DoLittle movie’s atmosphere extremely unreal. However, Michael Sheen looked exceptionally funny playing his villainous role. Also to mention the commando squirrel, which appeared hilarious too!

The post-production surgery messed up everything!

If you happen to believe in reports, they say that DoLittle had a troublesome history pertaining to its post-production. It faced a lot of turbulence during its post-production work as a team of other directors were brought in to do a last-minute surgery of the film with several re-takes and re-shoots. This was perhaps a major factor which messed up everything and led to a confusing screenplay. The cinematography by Guillermo Navarro was even more disappointing as upon watching the film, you may get the feeling of the animals and sceneries being computer generated, which should not have been the case. Perfection in cinematography was very much absent for this film.

I feel that it might have been quite a task for Stephen Gaghan to handle the overabundance of characters in the film. I would like to provide my condolences to Robert Downey Jr. as he has indeed taken his hands out of the Infinity Gauntlet and put it in a dragon’s mouth. Despite the fact of his unquestionable charisma and spirited takes, his dialogues appear to lack synchronization. This might have occurred due to repeated reshoots and redubbing. Had a little less been done for this film, such a disaster could have been avoided. However in spite of the disastrous results, the tonality appears to be funny and bubbly which might interest the children.

Overall, DoLittle is a film which in my opinion might be successful in delighting the kids but is capable enough to drive the adults crazy. So if you are over 14 years of age, do watch it at your own risk!